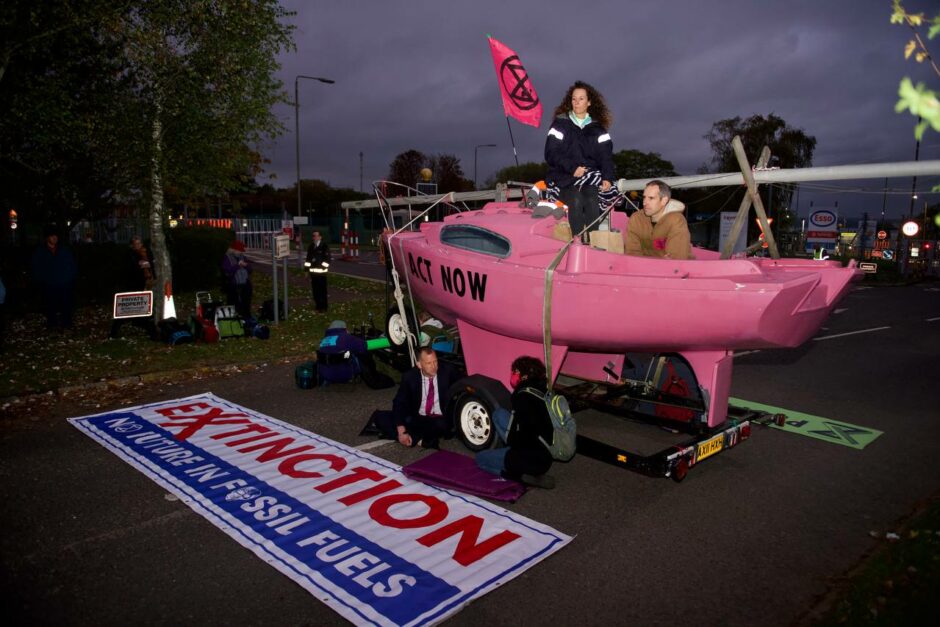 120 world leaders and 2,000 delegates have assembled for the 13-day UN-sponsored event in Glasgow. They will dine on a largely plant-based Scottish diet but accommodation may be hard to find. There are reports that some flats are being let for up to £36,000 per week. There will be plenty of XR and other activists in Glasgow. Most of these will be sleeping on people’s floors or even camping. The message they will be sending to COP delegates will be clear and simple. The talking has to stop, now is the time for action, and that action must be radical and irreversible.

The timely UN report last month has raised the stakes. Current plans to cut CO2 emissions, even if fully implemented, fall far short of the level required to meet the targets set by the 2015 Paris agreement. Instead, we are on track to reach 2.7 degrees above pre-industrial levels, far above the level needed to stave off climate disaster.

Will all the talk and fine speeches lead us anywhere? The omens are not good. Our own PM (a self-confessed late convert from climate denial) will attempt to lead by example while at the same time opening new oil fields and coal mines, cutting taxes on internal flights, freezing road fuel duty and planning to convert a paltry 0.02% of domestic gas boilers to heat pumps.

In fact the summit may well turn out to be a farce. Witness the Japanese decision to fly an empty Boeing 777 6,000 miles to check out airport arrangements in Glasgow. What’s wrong with TripAdvisor? And the autumn rains have come again, delegates are stranded on trains as trees have blown down onto lines and power cables. The advice from train companies has been to drive or fly to Glasgow!

Throughout COP, in Glasgow and around the world, XR will use peaceful, creative protests and non-violent civil disobedience to make our demands. We will sing and dance and lock arms against despair and remind the world there is so much worth rebelling for. We accuse world leaders of failure, and with a daring vision of hope, we imagine the impossible. Join in! If you can’t go to Glasgow, join your local group who may well be planning actions in solidarity

XR Scotland are looking forward to welcoming rebels from across the globe to Glasgow for the COP26 summit. Plans to provide hospitality, logistical support, legal info, wellbeing, and ceilidhs to members of the XR family from the UK and scores of other nations are well advanced. By the time this Newsletter goes out, there will already have been a host of actions and events. But to give just a flavour of what is planned for the rest of the month: on 3 Nov there is a Greenwash March in the City centre; on 6 Nov a Global Day of Action (Justice March) and a performance by the Fashion Action Dance Troop (not to be missed) on Glasgow Green; and from 8-10 Nov the People’s Summit at Adelaide’s. Full details of all events can be found here.

Breaking news (Monday) is that XR have discovered a recent high court injunction banning the blockading of roads does not apply in Scotland and that protestors who have been charged with offences may get a blank canvas in Scotland as police forces “don’t always communicate with each other”. A Police Scotland spokesperson said the injunction did not apply in Scotland, and it was suggested police will only make arrests “if they need to” for fear of being “overwhelmed”. Over 10,000 police officers have been drafted in to form a protective “ring of steel” around the city but Myke Hall, XR’s Scottish spokesperson, has said that ministers should be “very worried” about the disruption they plan to cause to the event.

If you’re going to COP in Glasgow: Read more about the plan here and the XR Scotland rebel agreement here, and join XR Scotland Telegram channel here for live updates.

If you are staying home keep up with all the latest news on COP26.TV a daily livestream featuring activists from around the globe and actions and news from Glasgow.

If you would like to financially support the activities and rebels in Glasgow, then you can donate to the main UK fundraiser.

From a protest on top of Fawley oil refinery drum to a banner drop on the A96 in Scotland, solidarity and outreach activities are taking place across the whole of the UK and worldwide.

Fawley in Hampshire is the largest refinery site in the UK and produces almost one-fifth of the fuel used on the UK’s roads.

Speaking from the pink boat earlier, Laura, who competed in the 2004 Athens Games, said: “Exxon, which are part of the Esso group, are planning to expand their oil exploration – these companies are still putting profits ahead of people. The government are just not acting on it – they are just not taking it seriously it seems”.

London 2012 Olympic champion Etienne said: “We need our government to rein in these rogue companies as a matter of urgency and show to the world ahead of COP26 that the UK is prepared to take a genuine leadership position”.

Extensive coverage of worldwide events can be found in our Global Newsletter, the next edition is due out next week. If you don’t already, subscribe here.

We’ve been covering this mega march for the last few issues and it was great to see that on Saturday, day 56 of the walk, the pilgrims finally arrived in Glasgow. They were joined there by four other marches:

To celebrate their achievement, the Pilgrims will be doing a performance in the Green Zone at COP! ‘Walk the Talk to Talk the Walk’ will be happening this Wednesday 3rd at 5pm – tickets are sold out but here is the livestream link so you can watch from your sofa.

In September 2020, Clare Farrell, Jessica Townsend and Rupert Read spray-chalked the word “Lies” onto the exterior of the building in Tufton Street, home of climate deniers The Global Warming Policy Foundation (now renamed Net Zero Watch). They poured fake blood down the steps. On October 28 they were found guilty of criminal damage. Each received a six-month conditional discharge and were ordered to pay a reduced court cost of £100 as well as a reduced compensation cost of £100.

Delivering their unusual sentence – the minimal permissible – the panel of three magistrates at City of London Magistrates Court praised the trio for their “openness and honesty”.

The must-watch BBC drama ‘The Trick’ exposed the birth of the GWPF in 2009 from the point of view of a scientist who was unlucky enough to get enmeshed in their campaign to discredit the science of global warming. Today it’s clear that groups like the GWPF are still very active in the run-up to COP26.

In this podcast, presenter Jessica Townsend and Tom Hardy from the Media Tell The Truth group look at the launch of the GWPF back in 2009 and find that their tactics were clear from the beginning: bending the truth, using connections in right-wing media, and raising doubts on every aspect of moving forward with the race to decarbonise. They talk to Richard Black, a long-time BBC environment correspondent, and the author of ‘Denied: The Rise and Fall of Climate Contrarianism’.

The link to the podcast is here: https://www.podomatic.com/podcasts/xr-podcast

XR’s campaign continues against the duplicity of the Trustees of the London Science Museum in signing a deal with fossil fuel conglomerate Adani Group. Future actions at the museum are being planned.

This group’s outstanding success in highlighting the scandal of Britain’s decrepit housing stock can hardly have escaped anyone’s notice. IB is not part of XR even though many of its supporters are active in both movements. XR has recently drafted a statement clarifying our support for their highly disruptive actions.

To read the statement in full go here.

The UK newsletter needs you!

The UK newsletter and podcast teams are in search of new, passionate writers and radio/podcast producers to join us! Are you keen to tell rebellion stories and help grow the movement? Do you keep an eye on the news and what is and isn’t being said? Then please get in touch: xr-uknewsletter@protonmail.com.

Our regular UK Newsletter aims to be representative of the whole UK movement and its local and regional groups. So, send in your news, feedback and comments. You can email us or join our channel on Mattermost: UK Emails and Newsletter Requests. Remember the Newsletter is scheduled monthly, usually the first Monday. The deadline for copy is the Friday preceding.