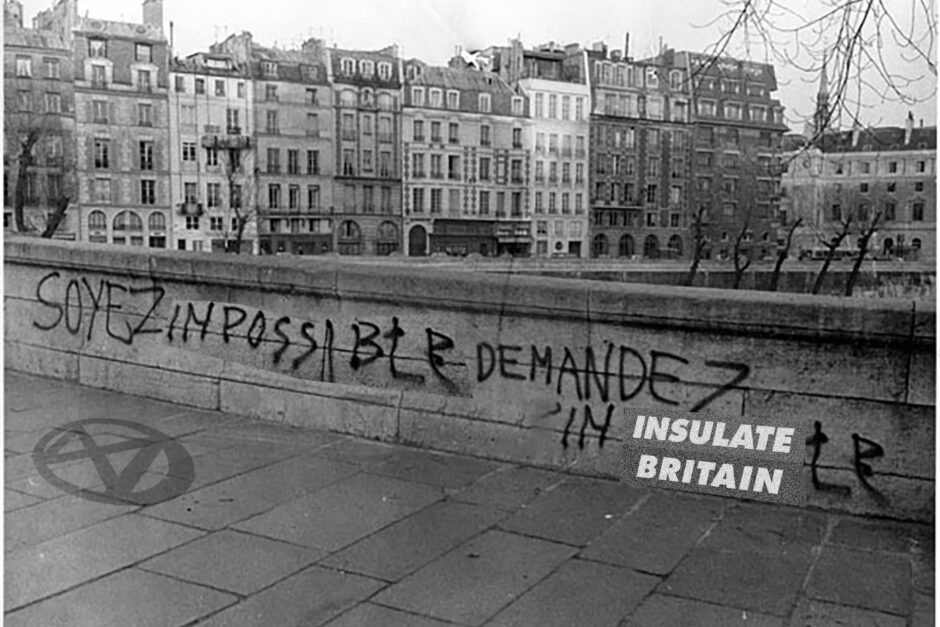 Be Impossible, Demand the Realistic: Statement on Insulate Britain from XR UK

In the face of the climate and ecological emergency happening now, XR recognises the need for disruptive actions that highlight the severity of the crisis. Insulate Britain is playing a vital role in shifting the Overton Window around public awareness and urgent government action.

The recent injunction which covers the UK’s entire road network is a warning to all of us who dare to stand up for truth; the UK government is coming for us all. It is also a complete vindication of our resistance.

While there are people from XR in Insulate Britain, we are not the same organisation and we operate entirely separately. Extinction Rebellion UK is and remains entirely independent. But we share much common ground and send love and courage to all those taking part!

When the students of the Paris uprising in 1968 graffitied the French capital with “Be Realistic, Demand the Impossible!” who would’ve thought it would be 53 years later on the other side of The Channel that this most imaginative revolutionary call to action would meet its prosaic alter ego?

For what is Insulate Britain if not the manifestation of an equally baffling position: Be Impossible, Demand the Realistic?

Insulate Britain’s continuing actions are the perfect reaction to the ridiculous position in which humanity finds itself in 2021. Like a three year-old repeatedly told to not touch the fire, our species seems inexplicably drawn to find out what the end of the world feels like. And like Extinction Rebellion before them, Insulate Britain appears destined to be the latest in a line of nonviolent civil disobedience movements demonised for daring to do something about our society’s collective deafness to the climate and ecological crisis.

It is fitting that this is happening in the United Kingdom, a nation state embodiment of farcical doublethink. For if fossil-fuelled greed is going to end first capitalism, and then everything else, it might as well play out in the place that first fine-tuned the internationalist fuck you in the form of the industrial revolution.

And with a government that obviously couldn’t give a shit about doing the job of actually running the country and keeping people safe, Insulate Britain offers a perfect dilemma.  A regime happy to oversee the deaths of 100,000 of its people via Austerity and 137,000 more during COVID is a regime that probably thinks it can cope with what’s coming down the line. But, when Middle Britain is presented with the image of retired doctors, electricians, councillors, nurses and clergy sat on a soggy slip road on the nation’s most pointless motorway, clasping cheap vinyl banners and tubes of glue, asking for a painfully dull demand of insulating every home to cut emissions, it puts in plain sight the absurdity and cruelty of a government who has had plenty of practice hiding behind the piled up bodies of the poor.

And what do we think is going to happen next? As the floods and the famines and the fires increase? As the people displaced by the crises increase? As supply chains and labour and food starts to fail? As floods cause more disruption than actual protestors?

What also happens next is eloquently laid out in Kim Stanley Robinson’s epic The Ministry For The Future. A wet bulb event in India means millions of deaths; a populace that realises it is being abandoned turns to terrorism. High-emitting industries are ended almost overnight: flying and the international shipping industry. And if cli-fi’s not serious enough for your rational/hot take, ask Sir David King about how geoengineering is the only thing that can save us. If it works.

That’s what happens next. If your commute being screwed up doesn’t focus the mind, the prospect of being a target because you want to fly to Thailand, or having to pay for space mirrors will be a real sobering-up.

So that’s why Extinction Rebellion has tactics ‘you don’t agree with’, why Insulate Britain is so repetitively annoying. Because we’ve both done the graft of travelling to the future, and decided that an alternative should be on offer. Because we are the good guys. Yeah, really: the canaries. The people who believe it’s better to try and solve things through nonviolence, because the alternative is too terrible.

Stopping traffic is nothing. Roadworks stop traffic every day. Accidents stop traffic every day. Floods are now stopping traffic regularly. The hysterical response from government and its rabid right wing media tell us unequivocally that we are doing the right thing. Prince Charles chiming in with the ‘understand the frustration, but be more positive’ schtick tells us: we are doing the right thing.

And now is the time to do the right thing. The time to stop whinging, to get off the fence; the time to really face up to what is happening.

Government has a choice. It can actually do something about the crises we face, or it can stick its head in the sand, demonising and criminalising those who are clamouring for change along the way.

And you have a choice too. Keep your fingers tightly crossed, say your prayers, and hope against hope that someone else will come and save you. Or you can get off your arse, do your bit, and be the ancestor your future family desperately needs.

It will take less of us than we think to turn annoying into revolutionary; imagination into paradigm shift.

But tomorrow is too late.

Be Impossible, Demand the Realistic.

Written by Charlie Waterhouse of the XR UK Media team