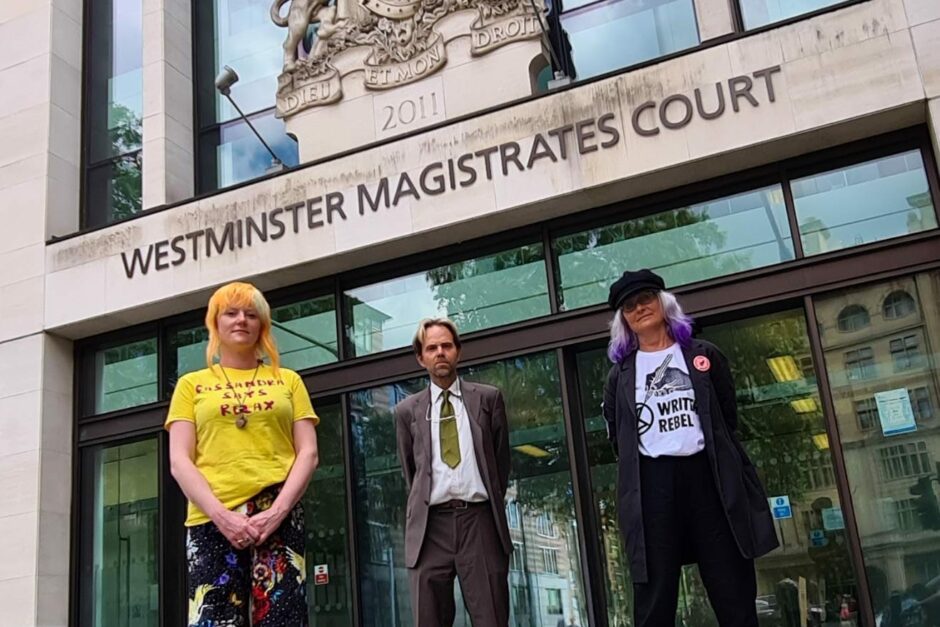 Top Writers Come Out In Support of Tufton Three

A group of high-profile writers and veteran green campaigners have come out in support of the Tufton Three by making videos to wish the three well in their court case on Thursday 28th October as part of the campaign Denial on Trial.

A compilation video of the statements will be launched just before the trial on 28th October at City Magistrate’s Court. Individual videos can be seen on the Writers Rebel website.

This was part of a starry event at Tufton Street in September 2020 in which writers such as Zadie Smith, George Monbiot and Paul outlined the work of the secretive think tanks who have access both to government and to the right-wing press but do not disclose their backers. Ignominiously, the groups also claim charity status.

As novelist Ned Bauman says, ‘if you make a career of telling lies then it is the least you can expect.’ Trainspotting author Irving Welsh adds: ‘The fact that these people are being persecuted while others who are spreading all these lies are free is a nonsense.’

The court case has triggered the launch of a campaign Denial On Trial which aims to turn the tables on the GWPF and put them in the spotlight. The mini campaign has included the visit of a 12ft dodo to Tufton Street, the dropping of a banner, a podcast about the Global Warming Policy Foundation now rebranded as Zero Net Watch. A planned tour of the street similar to the Ripper Tours has had to be postponed.

Tom Hardy from Media Tell the Truth group said: ‘There has been some great synchronicity because the campaign has coincided with the broadcast of a BBC drama The Trick which is still on BBC iplayer and shows the way the Global Warming Policy Foundation started. After the theft of emails from the University of East Anglia’s Tyndall Centre, and the leaking of a selected few designed to do th4e most damage, the Global Warming Policy Foundation launched and used those emails to obscure the science of the time.

‘Some credit this in part with the failure of the Copenhagen COP which promised so much. We must make sure that for this Glasgow COP the climate contrarians do not operate with such devastating results. They have already tried to impede the Government’s Carbon Net Zero plans with many opinion pieces in the Spectator, the Telegraph, the Times the Mail and even the Sun.’