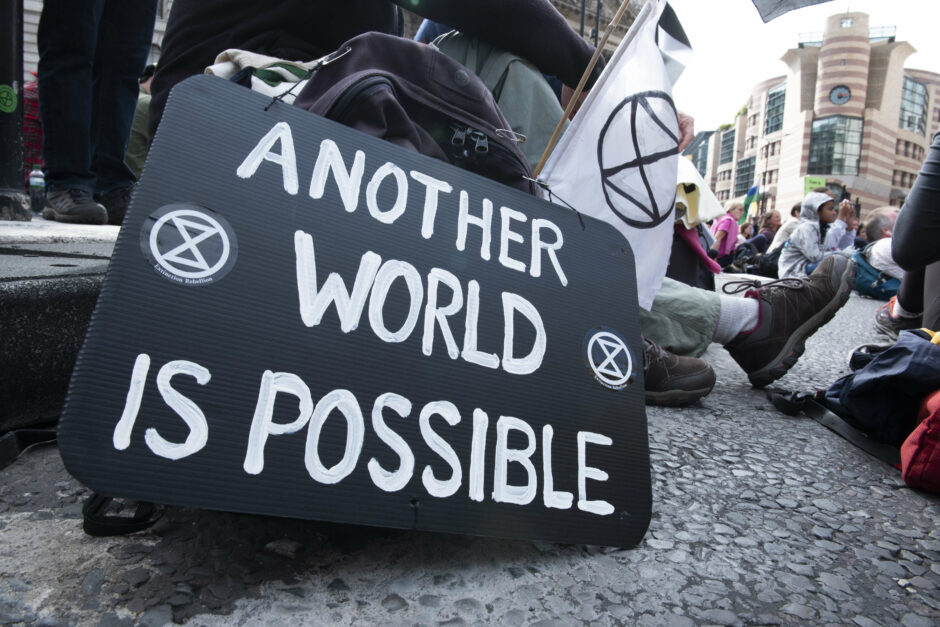 The march will not be any ordinary A to B march. It will take the form of a tree with people branching away along the route to key locations where they will participate in Rebellion of One. These individual acts of nonviolent civil disobedience – a tactic we’ve used once before – will see people sitting alone to block roads, wearing signs that say ‘We are nature defending itself’ and ‘Stop all new fossil fuel investment now’, to highlight Extinction Rebellion’s immediate demand.[1] Like the butterfly effect, individual action can create a ripple effect and move the hearts and minds of large numbers of people in untold ways.

Alex Dickenson of Extinction Rebellion, said: “We are at the most important time in this planet’s history. The next 10 years will determine the rest. And London is the most important place – the origin of global capitalism – the brain of the beast. Like it or not, at this time and in this place, what you do matters; your behaviour influences others; your life is meaningful.”

Ina Maria Shikongo, Fridays for Future, Windhoek, Namibia – campaigner against oil drilling in the watershed of the Okavango Delta by Canadian company ReconAfrica: “By pillaging the resources of the Earth, without consideration for the consequences, we foolishly declare war on nature. And nature will respond with its full force, as we have seen just this past summer in the northern hemisphere. What more proof does the world need to understand actions in one place will have consequences far away. What happens in kavango won’t stay in kavango”.

The UK is one of the world’s most nature depleted nations.[2] A quarter of all our animals, half of all are birds, are on the verge of extinction. According the United Nations, “the world must re-wild on a massive scale”.[3] We have lost almost 70% of all plant and animal life on the planet in just 50 years, with a species going extinct every 5 minutes.[4]

To save nature is to save ourselves.

Along the march will be large puppets created by artists from XR Calderdale.

Andrew Kim, an artist behind the puppets, said: “We carry today ‘Lobo’ or Wolf – the nickname of Forest Guardian Paulo Paulino Guajajara – who was brutally murdered in an ambush by illegal armed loggers in 2019. Lobo was only 26 years old. He was part of an indigenous movement formed to protect their Amazon forest homeland in Maranhão, Brazil. Together they watch, monitor and put their own lives on the frontlines to try to stop the increasing destruction of their forests and the threats to their way of life.”

After weeks of pink tables, crisis talks, calling out the City of London, and increasing police violence, we end the rebellion with the same message as we started; The climate and ecological emergency is happening now, everywhere we look. With only a few months to go until COP26 – arguably the most important climate conference of our lives – we came to tell the people of the UK that we all must pull together and demand the change we so desperately need. We can not wait for World leaders to save us.

With the City of New York declaring a Flash Flood Emergency, and reports that say children were forced to eat shoe leather in Madagascar as the country experienced a climate change induced famine, we may not have had our demands met, but we can leave with our heads held high that we gave it our best shot.[5][6]

See you at COP!

But for now, let’s March for Nature and call on everyone to join in a celebration of all life on Earth. Bring your love, grief and rage, your friends and family; everyone together.[7]