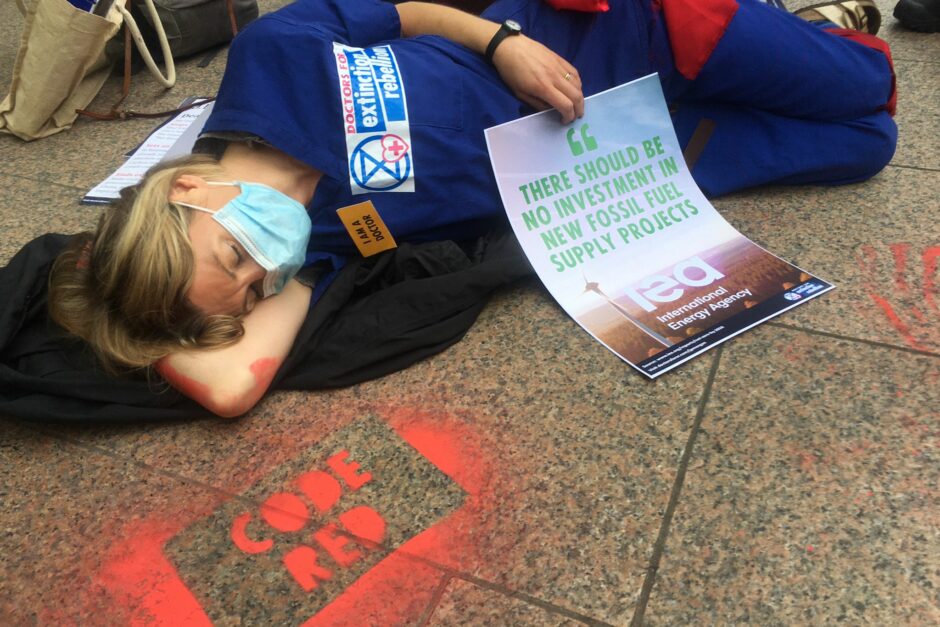 This morning, sixty doctors, nurses, midwives and other healthcare workers delivered an urgent public health message to the world’s biggest fossil fuel funder JP Morgan. Four held a banner saying  ‘End Fossil Fuel Funding’, others chalk-sprayed ‘CODE RED’ on the walls and the rest staged a ‘die in’ in front of the doors to symbolise the deaths caused by fossil fuel funding. Several doctors were forcibly removed quickly and aggressively by security. This followed a previous protest at JP Morgan just 2 days ago by 8 women, who broke glass at JP Morgan’s offices in Victoria Embankment.[1]

The group, who have received public support from WHO Director General Dr Tedros Ghebreyesus and Lancet Editor Dr Richard Horton, delivered a letter addressed to the CEO Jamie Dimon, and took the opportunity to read a recent special report on JP Morgan to their staff via megaphone from the roof of their revolving doors.[2][3]

The report, entitled “A Fig Leaf for Expansion, Assessing JP Morgan’s 2030 Climate Targets” by the Rainforest Action Network, supports the recent International Energy Association’s assertion that there should be “no investment in new fossil fuel supply projects” [4][5]. It suggests that JP Morgan is “uniquely responsible among its peers for fuelling fossil fuel expansion” and describes their targets as “flatly insufficient”, despite their claims to be “Paris-aligned”. Other commentators accused JP Morgan of using a “convoluted accounting trick” to allow them to meet its own internal targets whilst still being able to expand fossil fuel production.[7]

In the doctors’ letter to JP Morgan they made reference to the recent  “bombshell” UN report [8], which says the world will heat up by 1.5C before 2040 – a decade earlier than forecast, the recent patient evacuations from Whipps Cross hospital in London due to flooding, which has been attributed to climate change, and the recent defeat in the Dutch courts for Shell which shows the vulnerability of JP Morgan to court proceedings [9][10].

Dr Chris Newman, General Practitioner and co-founder of Doctors for Extinction Rebellion said “Climate change is at our door, and has entered our hospitals. JP Morgan is risking the lives of vulnerable children around the world, as well as my patients and my  family. I hope that some of the workers in Canary Wharf will realise today how culpable their companies are and begin to work together to change their direction. Not in a few years – but today.”

Jo Hindley, Registered Midwife said “As a midwife it hurts to know that every baby born today is being laid in the path of a hurtling juggernaut, fuelled by our consumption of coal, oil and gas. I cannot stand by while banks like JP Morgan continue to pour petrol on the fire.”

Dr Lynne Jones OBE, Child Psychiatrist and relief worker said: “We are already seeing the devastating mental health impacts of floods, fire and heat across the world. Fossil fuels are the cancer at the heart of the climate crisis and they have to be cut out”

Maggie Faye, Registered Dementia Nurse said: “We know from recent research that fossil fuel air pollution causes 1 in every 5 deaths [11], from heart disease and dementia to lung cancer and cot death. But it is the fossil fuel driven climate emergency that I’m most worried about. We must act now to prevent people dying and suffering unnecessarily.”

Mr Andrew Stevenson, Consultant Trauma Surgeon said: “Fossil fuels are killing our planet. They were once a means of advancing human development, but they are now the cause of planetary destruction. If we are to stand a chance of saving a liveable planet for ourselves and future generations, banks needs to end their investments in fossil fuel exploration and increase investments in the low carbon economy.”

[5] Net Zero by 2050, A roadmap for the global energy sector, International Energy Association, May 2021.

[9] The floods show London is now on the frontline of the climate emergency, Sadiq Khan, Guardian July 2021

About Doctors for Extinction Rebellion

Doctors for Extinction Rebellion is a health professional collective who, appreciating that climate change is an impending public health catastrophe, have decided to support and undertake civil disobedience with Extinction Rebellion worldwide. We are doctors, nurses, occupational therapists, physiotherapists, paramedics, midwives and other allied health professionals.

Whipps Cross is a hospital in East London.  Around 100 patients  were evacuated when heavy rainfall affected both the main power supply and the backup power supply overnight on a Sunday. Had this happened during the day it would have impacted surgical procedures, and could have led to serious consequences. On the same day Newham hospital, also in East London, was flooded