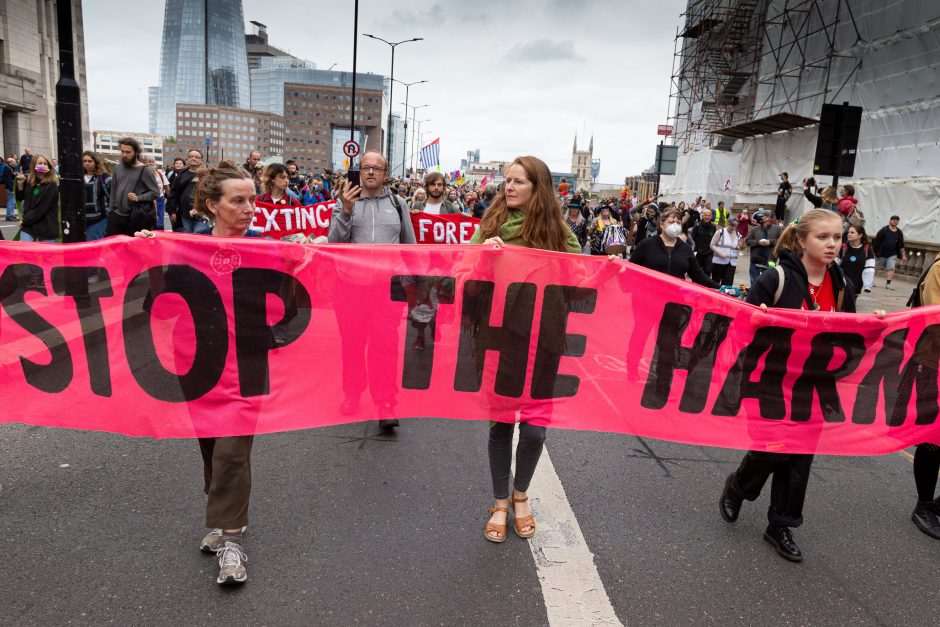 STOP MAKING IT WORSE: Extinction Rebellion will get off the streets when Government and the City of London stop pouring petrol on the fire

It is the 9th day of the Impossible Rebellion and Extinction Rebellion is taking our immediate demand to stop all new investment in fossil fuels to the doorsteps of the Government and the City of London.

The International Energy Agency said in May this year that if the world is to keep to its climate targets and meet the target of net zero emissions by 2050, all new investment in fossil fuels must cease by the end of this year. [1] Extinction Rebellion is asking the government, if they are serious about tackling the climate crisis, why will they not take this obvious first step ahead of hosting the COP26 UN climate talks in November? With the summit only a few months away, the general public deserve an explanation as to why they will not take this obvious step to stop pouring fuel on the fire.

Sophie Cowen from Extinction Rebellion, said: “Our government is about to host COP26, the UN Climate Talks responsible for reaching international agreements on tackling the climate crisis, and yet they continue to sign off liscences for new fossil fuel projects. How can the public have any faith that they are taking the climate crisis seriously if they won’t even act on the advice of the International Energy Agency and halt investment in new coal, oil and gas projects? In the face of such willful disregard for public safety we have no choice but to take to the streets in rebellion.”

From 12 noon members of Extinction Rebellion will march from Parliament Square along Whitehall to highlight the deaths of millions of children that will result from Government inaction on the climate crisis. Marchers will be dressed in funeral garb and mourning veils, walk slowly, silently and solemnly along Whitehall, pushing babies’ prams, painted ghostly white, to represent the tens of millions of children’s deaths that will occur if the Government continues to fail to take urgent action on climate breakdown.

Others will meet at City Hall at midday to continue the disruptive intervention on the City of London.

Meanwhile XR Families will hold a ‘play-in’ outside the Bank of England from 2pm. They will be joined by Doctors for XR who are hosting an emergency meeting between child safeguarding specialists on the streets of London today to consider whether the UK is failing in its legal duty to safeguard children from the impacts of the climate crisis. Caroline Lucas will join outside the Bank of England at 14.00, speaking to the Future Generations of Well-being Act.

Dr Lynne Jones, OBE,  consultant child and adolescent psychiatrist  and relief worker said: “I have spent my life working with the devastating effects of conflict and disaster. The climate and ecological emergencies are exacerbating both of these and bringing them home. I have a duty of care and I have to act.”

Extinction Rebellion’s whistleblowing platform, TruthTeller, helps employees at planet-damaging companies anonymously disclose what they know. We are calling on the people who work in the City of London to step up during the Impossible Rebellion and blow the whistle on employers who are driving the climate crisis.

Because we refuse to be bystanders as world leaders continue to facilitate climate and ecological breakdown. As we speak, over a million households on the east coast of the United States are without power due hurricane Ida. At the same time, the west coast continues to be overwhelmed by forest fires.

To keep up with breaking news via our WhatsApp broadcast group for journalists, email your mobile number to press@extinctionrebellion.uk or call our press phone on +447756136396.