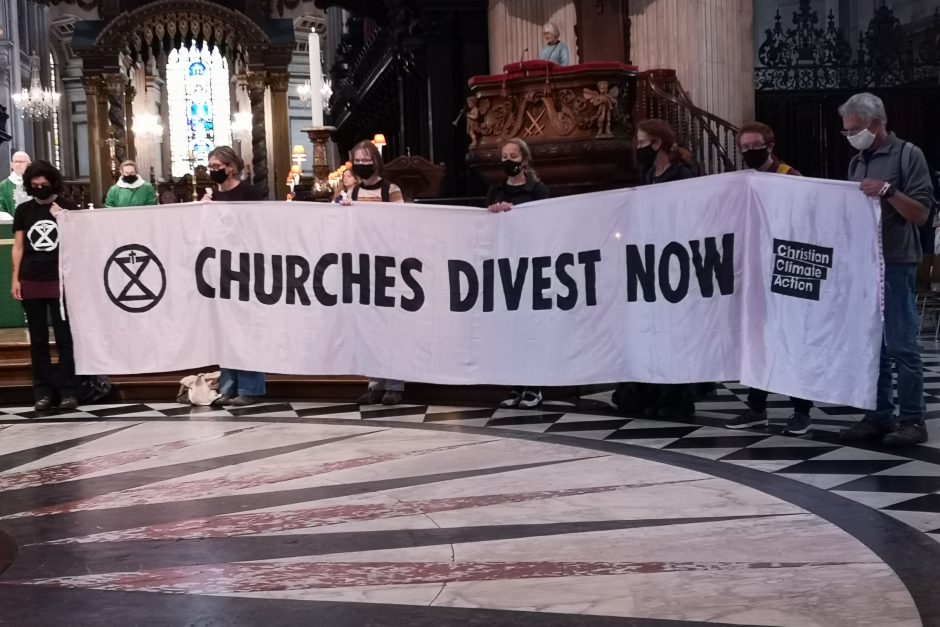 Immediately following Communion at a Eucharist service, the group processed to the altar and, facing the congregation, held up banners that read: ‘No Faith in Fossil Fuels’ and ‘Churches Divest Now’.

Christian Climate Action is demanding the Church makes an immediate pledge to end all investment in fossil fuel companies and completes that divestment by 31st December 2021.

The CCA is also asking the Church to speak out urgently and call for immediate action to prevent irreversible climate impacts and ensure a liveable planet for all of God’s creation.

As well as the intervention inside the cathedral, a group gathered on the steps outside with banners displaying the same messages.

Rev’d Canon Jonathan Herbert from Hillfield in Devon, one of those involved in the protest, said: “The Church Commissioners and Pension Board rightly don’t invest in companies producing arms or tobacco, but surely investing in fossil fuels, with what we now know, is almost as deadly. It’s time for the Church Commissioners to take a lead and divest from death-dealing fossil fuels.“

Rev’d Tim Hewes from Oxfordshire, 71, said: “The Pensions Board and the Church Commissioners, by investing in fossil fuels. mistakenly believe that they can steer these all-powerful companies towards climate friendly policies. After years of engagement we know it’s not working. These companies are deaf to the entreaties of the church. We need to divest.“

Rev’d Bill White, 66, said: “I am agitated by the complacency of the institutions of the Church in the light of the climate crisis. St Pauls’ values include being “people of integrity…looking after the Cathedral for the next generation.

“There will be no need for a cathedral in a dead world. Creation is also a cathedral and our inaction is destroying it. The Church must be a prophetic leader to our nation and announce we have divested from fossil fuels.“

Since 2013, most major Christian denominations have made a commitment to divest from fossil fuels including the Quakers, Church of Ireland, United Reformed Churches, Methodist Church, Church of Scotland, Church in Wales and the Baptist Union. Worldwide, more than 400 religious organisations have made commitments to divest in recent years.[4]

The Church of England, the Scottish Episcopal Church and the Catholic Church are the only major denominations still investing in fossil fuels. [5]

The action comes just three weeks after a new report from the Intergovernmental Panel on Climate Change said that: “unless there are immediate, rapid and large-scale reductions in greenhouse gas emissions, limiting warming to close to 1.5°C or even 2°C will be beyond reach.” [6]

Nine out of ten young Christians are concerned about the climate crisis but only one in ten think their churches are doing enough about it, according to research by the Tearfund. [7]

Church Commissioners have agreed to begin divesting from fossil fuel companies not aligned with the Paris Agreement in 2023. However, that goal would exclude a company like Shell, which while claiming to be aligned to Paris is nonetheless still committed to future fossil fuel exploration. Earlier this year the International Energy Agency said that investment in new fossil fuel production must end this year if the global energy sector is to reach net zero emissions by 2050.[8]

The CCA has written to several leading members of the Church of England including the Archbishop of Canterbury Justin of Welby, Bishops and Directors of Finance of the 21 dioceses still investing in fossil fuels. They have also requested a meeting with the Bishop of London and Director of Finance to discuss their demands.[9]

In November, world leaders will meet in Glasgow at the COP26 conference to discuss the climate crisis. The Church needs to lead by example in the run up to this historic meeting. As the recent IPCC report states starkly – humanity is running out of time!

[1] Christian Climate Action is a community of Christians supporting each other to take meaningful action in the face of imminent and catastrophic anthropogenic climate breakdown. We are inspired by Jesus Christ and guided by the Holy Spirit. Following the example of social justice movements of the past, we carry out acts of public witness, non-violent direct action and civil disobedience to urge those in power to make the changes needed. Since November 2018 we have worked closely with Extinction Rebellion and have become known as the Christians in XR. www.christianclimateaction.org.

[2] Source of investment data: National Investing Bodies report to General Synod  (p.24-26) states that 0.5% of the Church Commissioners’ portfolio is invested in oil and gas companies (i.e. 0.5% of the Church Commissioners’ £9.2 billion portfolio = £46 million) and that the Church of England Pensions Board has £8.9 million invested in oil and gas companies. https://www.desmog.com/2020/07/17/church-invested-18m-fossil-fuels-methodology/

[4] Denominations which have divested: https://brightnow.org.uk/news/pressure-on-the-oil-industry-dutch-court-ruling-and-iea-energy-report/

[5] For more details on Church of England investments in fossil fuels by diocese, and other UK church investments, see this briefing document: https://docs.google.com/document/d/1HhY95jT79tRRW63eB3Ok0SA-5xp6u5wyxSSU6cAVnvQ/edit?usp=sharing

QUOTES FROM OTHER MEMBERS OF CCA INVOLVED IN THE ACTION