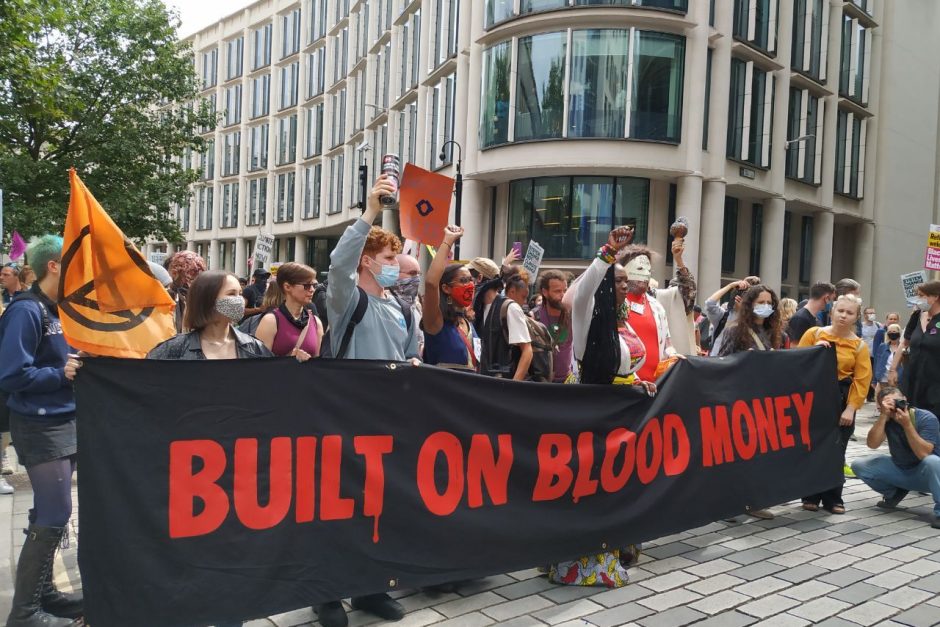 THIS IS AN INTERVENTION: Extinction Rebellion heads to the City of London to take action on the root cause of the climate and ecological crisis

After 4 days of Crisis Talks popping up across Central London, Extinction Rebellion will shift focus today by moving to the City of London, the driver of climate and ecological destruction. Leading with our new immediate demand – for the UK Government to stop all new fossil fuel investments immediately – we will make it clear that the responsibility to rapidly decarbonise starts right here in the City.

Beginning at the Bank of England at 12pm, the ‘Blood Money’ march will make its way through the City, standing side by side with United for Black Lives. The march will highlight the bloodsoaked profiteering of our economic system: the banks that fund fossil fuel projects, especially in the Global South; the law firms that represent them; and the institutions that enable them to operate with impunity.

This is an intervention on the City of London. Please do not resist.

The City of London is a root cause of the climate and ecological emergency. If it were a country it would be the 9th biggest carbon emitter on the planet.[1] Not one of the top 10 funders in the City has made a serious plan to exit fossil fuels, despite having pledged to go Net Zero by 2050. Not one. It’s stuck in a cycle of addiction that needs breaking.

But it is also at the heart of systemic racism – the City of London was a driving force behind the transatlantic slave trade, and today hosts numerous institutions responsible for to exploitation and extraction from the Global South.[2]

Chris Harris, spokesperson for Extinction Rebellion Unify said: “It stands today that finance is the grease in the wheels of global exploitation, whether it be the trillions of dollars in resources drained from the Global South, or the billions of tonnes of carbon emissions produced in the name of profit by companies here in the City.”

The world has been failing to tackle the climate and ecological crisis for over 30 years and the City is the centre of the reason for that failure. Rainforest Action Network (RAN) revealed that the top 60 banks have spent an eye-watering $3.8 trillion on fossil fuels since the 2015 Paris Accords, and their 2020 investments outstrip those in 2016 or 2017.[3] Emissions from Barclays and HSBC alone are 1.8 times the entire UK domestic emissions.

Zoë Blackler of the Extinction Rebellion media team said: “Our addiction to fossil fuels must end, and we know the first road block the government will meet as they try to wean the UK off them will be right here in the City, claiming it’s too costly and they just need a few more years. But enough is enough. Before we begin to repair the damage, we need to stop making the crisis worse. Right now. Because change is coming whether we like it or not. We have so far to go, ending new investment in fossil fuels is the first obvious step.”

Many of the institutions that the Bank of England regulates are central to the fossil fuel economy and are driving us towards climate breakdown – including Barclays and HSBC, the two biggest funders of fossil fuels in Europe.

The marchers first stop was Standard Chartered where climbers climbed ladders on to the entrance way of the firm and threw red paint across the large sign. Despite its support of the Paris Agreement, the bank has funnelled over $31.42 billion into fossil fuels since the agreement was signed, and the current policy will see it still fund major coal companies to 2030 and beyond. Since 2006, the bank has funded US$434 million to Adaro. In April 2021, the bank helped provide another US $400 million for Adaro’s coal mining, as part of a syndicate of banks. This is despite Standard Chartered’s internal analysis showing Adaro’s activities aligning with a catastrophic 5-6°C of global warming.

Following this, red paint was then sprayed onto the front of the Guildhall with fire extinguishers. The Guildhall was it is the administrative and ceremonial heart of the Corporation of the City of London. It is the symbolic and actual centre of the system that is killing us. The City’s current response to climate and ecological breakdown is to describe it as “the greatest business opportunity of all time”.

Chris Harris, spokesperson for Extinction Rebellion Unify: “I myself have visited a slave castle in Ghana owned by the Royal Africa Company, I experienced the dungeons where my ancestors were left to rot shin-deep in their own shit. To think that the company administering this sat in the Guildhall, and all of these pretty buildings were built with the profits, is horrifying. It stands today that finance is the grease in the wheels of global exploitation, whether it be the trillions of dollars in resources drained from the Global South, or the billions of tonnes of carbon emissions produced in the name of profit by companies here in the City.”

The march then moved on to Debevoise and Plimpton law firm, where rebels threw red paint on the doorsteps. This firm has represented Shell in UK court battles, defending them in a lawsuit brought by 40,000 villagers from the Niger Delta from claims against the oil giant over decades of oil spills.

​​​​Over five decades, oil and gas extraction have caused large-scale, continued contamination of the water and soil in Ogoni communities. The continued and systematic failure of Shell and government to clean up have left hundreds of thousands of Ogoni people facing serious health risks, struggling to access safe drinking water, and unable to earn a living. Since 2014 Eni has reported 820 spills in the Niger Delta, with 26,286 barrels or 4.1 million litres lost. Since 2011, Shell has reported 1,010 spills, with 110,535 barrels or 17.5 million litres lost. That’s about seven Olympic swimming pools. About 40 million litres of oil are spilled every year across the Niger Delta, according to the Rise for Bayelsa campaign.

Marvina Newton of United for Black Lives and BLM Leeds: “It is time to hold the institutions that are built with blood money accountable for their oppressive colonial practices that drive the crises of climate and racism. As a Nigerian, I cannot stay silent whilst corporations like Shell and their legal representatives at Debevoise & Plimpton, who we targeted today, continue to decimate the land and livelihoods of the people of the Niger Delta. The legacy of colonialism and the slave trade lives and breathes within the walls of the City of London, and we must collectively raise our voices and demand change to these systems of oppression and exploitation.”

The march then visited the London Stock Exchange where people filled Patenoster Square with fake blood. The London Stock Exchange was built on blood money. It is the ultimate symbol of our market capitalist economy and for 300 years has been a key enabler of environmental destruction and exploitation. The stock market is a crucial source of funds for firms in extractive industries – most of the world’s largest fossil fuel and mining companies that are driving the climate and ecological emergency and exploiting people across the world are listed at the LSE. A number of London listed mining companies are linked to the murder of protesters in the Global South.

According to the Environment Agency, the FTSE 100 is currently on track for 3.9 degrees of global heating. According to Professor Johan Rockstrom, joint director of the Potsdam Institute for Climate Impact Research, a temperature rise of 4 degrees above pre-industrial levels could result in the deaths of millions of people as the world would only be able to sustain a fraction of the current population.

The day concluded with rebels holding an occupation at Mansion House intersection with 3 large bamboo structures.

Extinction Rebellion is also inviting employees working for companies still bankrolling fossil fuels to Whistleblow for the Planet and tell us what they know via our whistleblowing platform TruthTeller.Life.