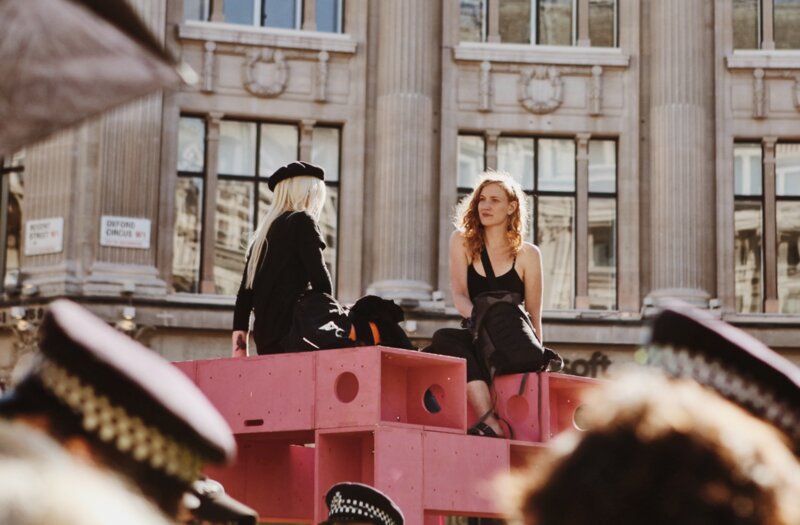 Catch up on all the action from yesterday, featuring more lock-ons, a ghoulish Mother Earth, and a very special award.

As a brand new day of Impossible Rebellion breaks, let’s take a second to bathe in the afterglow of yesterday’s action. It was a day that burned bright with righteous anger and intense sunshine. The hard work and weeks of preparation are coming to fruition in actions that are wondrous to behold. There’s no doubt that this Rebellion is hitting its stride.

This issue of Rebel Daily is jam-packed. A coalition of allied groups took their outrage and solidarity straight to the Brazilian embassy to advocate for the Amazon and Indigenous rights. Later, a group of women shut down Oxford Circus and then lit it back up with an afternoon of sparkling rebellion activities. To the east, the Rebellion’s camping contingent continues to be inundated in interest from the local community. Members of which formed an orderly queue to engage with the campers.

And all the while, from desks and phones and laptops all over the UK, the digital rebels remain agile and self-organising as they find new ways to give Barclays compassionate hell.

If you’re on the fence about joining in the action, come on down! Check this to find out what’s on and join this Telegram group. Don’t worry, the water’s warm and full of happy samba beats.

The sun was truly shining on Oxford Circus yesterday at the glorious site taken by a group of rebels who identify as FINT (female, intersex, non-binary and trans). But every part of everyone was soaking up the excellent vibes in Oxford Circus.

While another successful decoy march from Piccadilly drew the police’s focus away, a group of rebels made quick work of unloading their gear from a vehicle and assembling a structure in the street. Just as they were locking into position, the police descended and started forcefully pulling the rebels apart. Scenes of a distressing nature followed. Rebels screaming out in pain as super-glued hands were torn apart. Police hands frantically trying to get a grip on their bodies.

When the skirmish was over, two women sat atop a pink structure. The blocked junction quickly turned into a vibrant pedestrianised hub. Around 16 more FINT rebels made a ring of lock-ons around the structure and sang moving songs while police cordoned off the small area, blocking the rebels on the ground from sight.

The hundreds of rebels gathered were not about to let a wall of fluorescent jackets dampen their spirits. The atmosphere was exuberant, with songs and lively samba drum beats enticing a constant stream of curious passersby into the open arms of our outreach teams. All of which drowned out the efforts of the police to blast a nasal-sounding message from a police van that fortunately nobody heard.

The FINT group’s action aims to draw attention to and stand in solidarity with women all over the world. Women are suffering the effects of the climate crisis disproportionately. As we know, the poorest and most vulnerable are impacted the hardest. 70% of the world’s poor are women and they rely more directly on limited natural resources. Meaning that women and girls are on the frontline of the climate and ecological crisis.

On the road, under the pink structure, rebels painted their message for all to see when the structure was finally removed: ‘Courage calls to courage everywhere’.

With thousands of Indigenous demonstrators camped out in Brazil’s capital to oppose the far-right Bolsonaro government, hundreds of protestors gathered in London this morning outside the Brazilian Embassy to show solidarity.

In true solidaristic style, this action saw a range of organisations joining forces: Amazon Rebellion and Parents for Future joined with Greenpeace UK, Brazil Matters and the Catholic Agency for Overseas Development (CAFOD). Each organisation handed a letter to the Embassy as part of the protest. They were calling for action to protect Indigenous Peoples’ rights and stating an intention to stand with Indigenous Peoples in their fight.

As Paul Morozzo from Greenpeace UK said: “In July, scientists announced that parts of the Amazon rainforest are now emitting more carbon dioxide than they are able to store. Indigenous Peoples are the best guardians of climate critical ecosystems. But across Brazil, invasions and destruction of Indigenous lands and brutal attacks against Indigenous Peoples are skyrocketing.”

Bringing the point home, he noted that UK companies such as Tesco are complicit in this brutality through their links with Brazilian agribusiness.

This week will see a massively important legal ruling in Brazil, which could have terrible consequences for Indigenous Peoples, within Brazil and beyond. On Wednesday we showed that whatever the outcome, we will not condone ecocide.

And the winner of the Charred Earth Award is…

Money Rebellion rolled out the red carpet to congratulate the executives of BlackRock, the Department for International Trade, and Vanguard for their exceptionally ecocidal efforts. This has been a much-contested category, but the winners really deserved their flaming trophies.

Another day, another massive disruption of Barclays’ communications systems.

Digital Rebels kept up the barrage of emails and calls to all reachable parts of Barclays, from call-banks to chief exec.

Across Zoom calls and group chats, Rebels have noted a powerful demonstration of XR’s self-organising culture. The collective hivemind has been continually sharing learnings, adjusting tactics and organically supporting one another. This infectious conscientiousness has even shown signs of going global. Several representatives from other XR nations have sat in on the daily Zoom calls, looking to adapt the UK model to their own efforts.

Spirits in the cybersphere are high. One rebel commented:

“Hi everyone, just wanted to say how amazing you all are and heartened I have been to follow this group. I’ve not been able to participate this week due to personal circumstances but am planning to be involved from the weekend. You are all brilliant and I’m getting lots of tips from all your posts! Much love and thanks to you all xx”

Digital Rebellion will be tyrannising Barclays until the end of the week. Next week, they’ll be descending on the Bank of England.

Throughout the Impossible Rebellion, XR Families are providing quieter, child-friendly spaces around or within action spaces. The first such space was at Trafalgar Square on Monday, with later spaces including Whitehall and Oxford Circus.

With crayons and chalk in abundance, kids have been creatively expressing their desire for a liveable world. They have also been playing together.

For their part, parents have appreciated this opportunity to take part without leaving their kids. If you think you might like to be one of these parents – or to hear about upcoming Families actions like Tuesday’s Feed-in and Play-in – please see the XR Families Broadcast group.

More campers continue to arrive at the Blackheath site – the camp is flourishing and morale is high! They are still dealing with considerable interest from the local community, with actual queues of people forming to talk to Rebels about what this XR thing is all about.

Yesterday, campers were rather excited when some members of the ultra-conservative Blackheath Society popped in for a visit. Despite being warned that the group might not be too amiable, the receiving rebels found their guests to be quite friendly and had a good conversation. One of the visitors even said he would let concerned members of their society know that there was nothing to worry about, that things were not as they might have perceived from the outside. A heartwarming story of people seeing past their differences.

“As soon as I saw XR on television, the idea – non-violence, looking after our planet and the message ‘There is no Planet B’ – I was in. I fell in love with it and I think this Rebellion is going to be awesome. I have seen peaceful protest work. Sometimes it takes days, most times it takes months or years, but if you are relentless then you get what you want eventually. Especially when you have the strategies that we have as a movement, and people like our founders who are absolute geniuses in my view.

I am originally from Argentina and after we gained our democracy in 1983 I was 14 and started to demonstrate on the streets to put the dictators in prison. Demonstrations at that time in Argentina were quite different from this country – they used to shoot at us with rubber bullets – but we got them into prison in the end. I have to say demonstrating in this country is an absolute joy, I love every minute of it.

Governments are very good at massaging the figures and not telling us the truth, and finding ways to leave the measures that need to be taken for later. We are approaching the tipping points so fast that unless something real is done we’re going to be in serious trouble.”