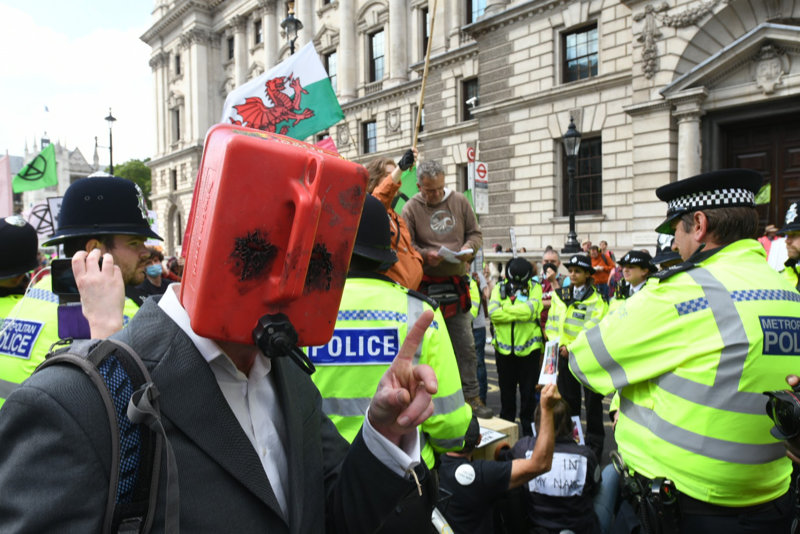 Our second day of Rebellion saw the end of The Table, a confiscated planet earth, a major set of actions by XR Cymru and ongoing antics from our friends in Digital Rebellion.

(To find out what’s going on this week, see the plan and join the Rebellion Broadcast Telegram group)

It’s the third day of the Impossible Rebellion, and things are hotting up. Yesterday, a range of inventive actions sought to draw the attention of Londoners to our shiny new immediate demand. The UK government must stop all new fossil fuel investment now.

XR Cymru rebels excelled by blocking a road outside HMRC, where they set up a joyful haven in a bid to persuade the government not to bank with Barclays. Elsewhere, a model Earth was torn to pieces by the boys in blue, while rebels held on by their fingertips. Oil was spilled outside Selfridges, where rebels protested the fashion industry’s dirty dealings. And Animal Rebellion hosted a ‘McSleep-in’ at a branch of a leading fast food chain in Leicester Square, having had enough of McDonalds’ dozy attitude to the life-threatening network of intersecting crises facing us.

Read on for all this and more from Day Two of the Rebellion.

As this abundance of actions shows, increasing numbers of rebels are facing arrest. With well over 100 brave rebels having already faced arrest, we’re proud to share with you the new legal crowdfunder. As heroic as it can look to be carried off in handcuffs before a cheering crowd, the legal struggle that our arrestees might face can be exhausting. Please donate what you can to support them through this process and help pay for legal fees.

Not in our Name – XR Cymru

On a sunny Tuesday morning, rebels from XR Cymru launched a coordinated and beautiful action to demand that Barclays – Europe’s most ecocidal bank – clean up its act. In the centre of London XR Cymru rebels carved out a space for themselves along Whitehall, with enough room for all to dance, sing, chant, and play.

After meeting in St James’s Park, rebels strutted down to Parliament Square to build the hype with some rousing speeches and music. From there they marched down Parliament Street towards their target: HMRC, the tax-collecting branch of the UK government. It turns out, HMRC banks with Barclays, which means that British taxes are continually invested in fossil fuels.

XR Cymru has a message for the government: Not in Our Name.

Clean Up Your Act

Marching towards HMRC with plenty of police officers hanging around their skirts, rebels knew they had to be quick to secure the site. A signal was given and they sprang into action, sprinting to positions and locking onto fake oil barrels and other structures before police could stop them. Colourful banners bore messages like ‘Government in bed with Climate Criminals’ and ‘Taxes in Barclays = Flooding in the Valleys’.

As well as a warning for future disasters in their home country, rebels displayed photos of floods and wildfires from around the world, where the climate crisis is already having devastating effects.

The action was bold and creative, and featured some playful theatrics to make its point. Rebels holding feather dusters put on a show as they tried to help HMRC clean up their act. This act was mirrored by rebels in Carmarthen in South Wales, where they scrubbed the pavement outside Barclays, impeded by a fake Boris.

Tuesday began with the government building something big. Sadly, they weren’t building a better democracy or a plan for a liveable future. They were erecting scaffolding in order to tear down The Table. By 10am police had cleared The Table of ecologists. It would turn out to be neither the first nor last of the day’s glaring metaphors.

Many rebels appeared to give last witness and farewells to the exalted table. But they didn’t wait around.

As the afternoon began, rebels were gathering in Leicester Square – preparing for another mystery manoeuvre. A booming samba band drew in numbers and energy before setting off and swooping round on Cambridge Circus. The crowds arrived to find a site already cleared of traffic and containing a large model Earth which was – appropriately enough – cordoned by police.

Unfazed by attempts at containment, rebels set up an effusive presence in the middle of the Circus, and sat down to hear speeches from major climate movement figures including Kate Raworth and Sian Berry. In a subtle but important difference from Monday, police did not clamp down on public access. Many curious onlookers were able to take part in our dialogue.

Destruction of the Earth

One group of visitors arrived in special style. Late in the afternoon, rebels established in the Circus heard a fire engine siren speeding towards them. In a faultless showing of our ‘blue light’ policy, every person sitting in the square stood up and parted like the Red Sea to make room. As they cruised through a now-empty Cambridge Circus, firefighters gave enthusiastic waves back to the cheering crowds.

At some length, police managed to force rebels off the Circus, and got to work on what might have been the day’s most glaring metaphor: the tearing open, confiscation, and eventual destruction of our model Earth.

On day two, digital rebels kept the pressure up on Europe’s most ecocidal bank. They somehow got their hands on email addresses for executive staff members… and have been inundating top decision-makers with heartfelt and intelligent requests to put an end to ecodical policies – namely the continued investment in fossil fuel projects.

A slew of scathing Google Maps reviews for Barclays branches was largely removed. However, one rebel noted that this can only mean the message is getting through to Barclays itself, forcing the bank’s PR department to deny the charges made against them.

Could Barclays’ website be a cryptic warning about flash floods and rising sea levels?

Digital rebels kept the calls coming into Barclays’ phone services, and soon received heartening news. Barclays have had to lay on extra staff to monitor their phones, including financial specialists supposedly capable of defending and justifying Barclays’ investment policies to this sudden spate of interested callers. Many rank-and-file Barclays staff expressed their sympathy with rebels, saying they shared the callers’ concerns but (naturally) couldn’t comment on their own employers’ policies.

At the same time, as rebels in London and Wales bring pressure to bear on this enormous bank, there can be no doubt that Digital Rebellion is making this pressure impossible for Barclays staff to drown out or ignore. We see you, Barclays.

We’re also told a major ecological expert will be dropping in Thursday’s zoom call, to remind digital rebels why their actions are so gravely necessary. The science is with us.

There are more amazing actions popping up than this humble team can cover! Luckily for us, a picture tells a thousand words. Here are some more highlights in photo form.

Rebels oiled up in front of Selfridges on Oxford Street to draw attention to the fashion industry’s way-outsized impact on the planet. The industry produces 10% of global emissions – more than international shipping and flying combined.

Animal Rebellion held a ‘McSleep-in’ at McDonalds and occupied the Leicester Square branch. Nearly 40 were arrested at their slumber party, where they called on the giantest of fast-food giants to stop sleeping on the job and transition to a plant-based system.

Across the way, the Nordic Rebellion is demanding an end to oil exploration and fossil fuel investment. Here’s a video from their first day.

We are only just getting started. Stay tuned on the Telegram group for the most up-to-date information about what’s going on. Read an overview of the plan here.

Animal Rebellion has a full schedule of actions and events planned. Join their Telegram broadcast chat to stay abreast with the latest updates!

Our legal crowdfunder is live!

Arrests are already in their hundreds yet the Impossible Rebellion has only just begun. Each arrest is potentially the beginning of a long and costly legal case for these brave activists. The legal fund is set up to ensure rebels don’t go through this alone, and provides expert legal advice and financial support to those charged.

Please donate to ensure rebels have access to much-needed support.

“There are two main reasons that bring me here. The first is fear for my own children, because I’ve got two girls, and the second is that I just don’t want to see billions of people dying because of our inability to act quickly and prevent something that could be prevented.

I’m a classical pianist and I have performed climate change awareness concerts. I also recently set up a fund-raising initiative for the World Land Trust in Surbiton. It’s a virtual charity shop where we swap items and all profits go to the World Land Trust. It’s a great charity because they buy land then protect it, and we raised enough money to save more than seven acres of rainforest.

I still feel that a lot of people, even though they know the facts, haven’t yet gone through the emotional process of realising what this all means for our future and our children and our lives. It means a completely different world. Natural disasters, people starving, rising sea levels – it’s an existential problem for the first time in history that is putting our existence at risk -and maybe that’s why people can’t grasp the scope of it? A lot of people are in denial but it’s something that we just need to face and deal with it, while it’s still maybe possible.”

Donate to the fundraiser