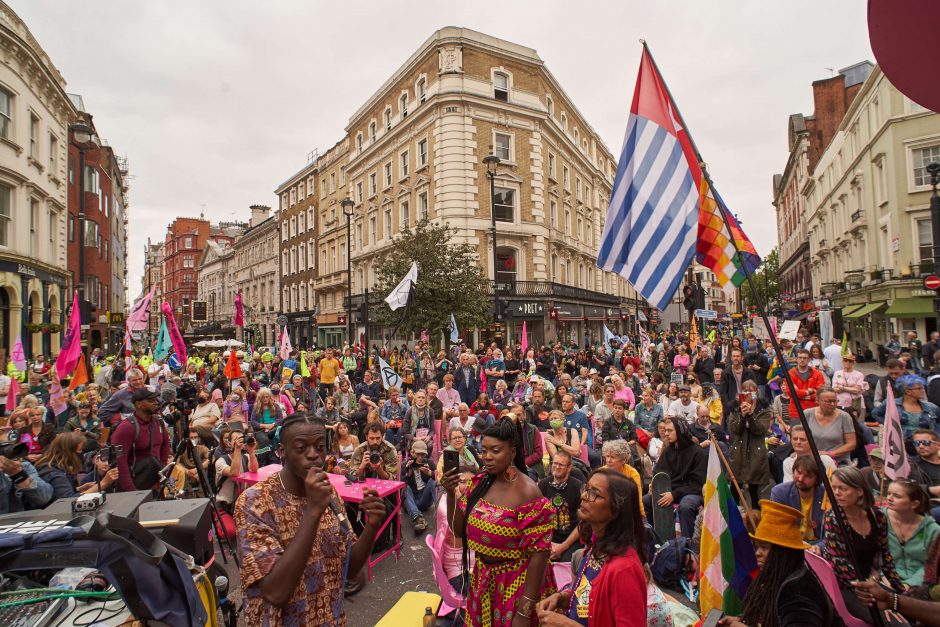 Following a brilliant first day of powerful speeches, great music, nonviolent protest and pink tables, day 2 of the Impossible Rebellion is in full swing. XR Cymru has already taken the reigns and occupied parts of Parliament Street, with rebels moving back towards Charing Cross Road.

We’re sad to report that our giant pink table has now gone with all rebels attached to it arrested. It was disappointing that the police immediately blocked roads and access to our Crisis Talks, where we invited the general public to the table to discuss how to tackle the climate and ecological emergency. We still managed to pop up outside the police cordon with pink ‘crisis talks’ tables and speak to members of the public as they passed by the occupation – more than ever we are hearing that people are concerned for the future and looking for what they can do to make a difference.

The Met’s decision to kettle the giant pink table meant businesses in the area were also made inaccessible to people passing by. We have to ask, what has the government got against people coming together to talk? As the climate crisis worsens around the world, it is crucial that people feel empowered to take a stand and create the change world leaders seem incapable of implementing themselves.

Alanna Byrne of the Extinction Rebellion media team said: “This rebellion is about people coming together to talk and share ideas in fun and creative ways. But we’re only on day 2, and the rebellion will continue to build. So don’t let yourself get FOMO or miss out on ‘the best club in London’. If you want action on the climate and ecological emergency then join us and do something about it. They can crush our table, but they can’t crush our spirit. Come out on the streets in nonviolent resistance and let your voice be heard.”

Ten people were arrested on Sunday night, 52 people yesterday (as of 10pm), and several more today. Our Crisis Talks continue, reaching out to the general public, as rebels make their way back through Central London and pink tables continue to pop up in random spots. Following the occupation of Parliament Street, *we will be meeting at 3pm this afternoon by the Harry Potter statue in Leicester Square* for more action. Join us there!

Other things to know:

_A reminder also that if spokespeople aren’t arranged through us then they aren’t necessarily XR spokes!_