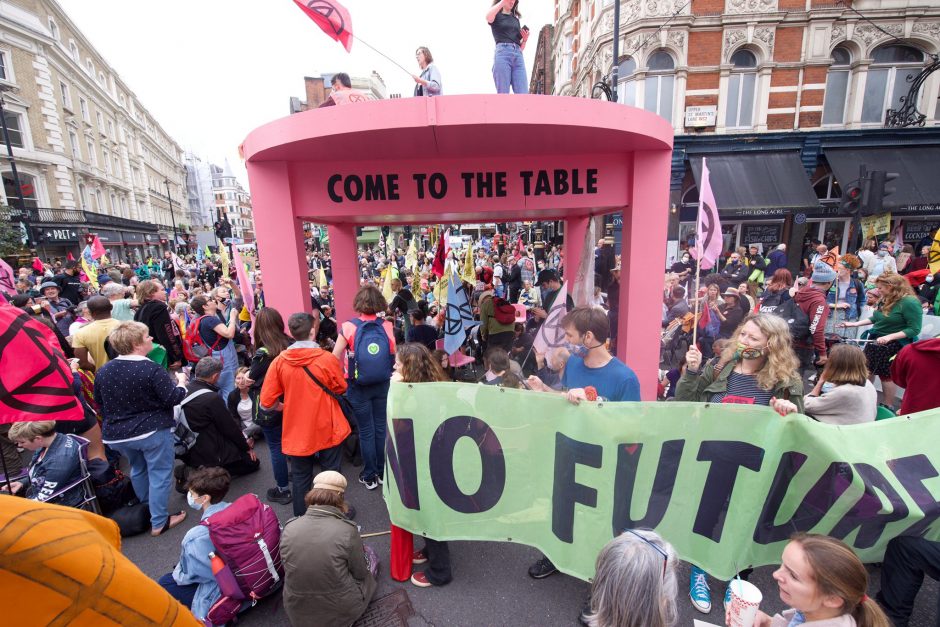 At midday today, a 4 metre high pink table landed at the intersection by Upper St Martins Square and Long Acre, near Leicester Square station, with the words ‘COME TO THE TABLE’ written across it. Once arrived, 4 people emerged from the truck that carried the huge object into the square and climbed onto the table, now preparing to stay for the long haul and occupy the square.

The table launched XR’s Impossible Rebellion, bringing the seemingly impossible to life in outlandish Extinction Rebellion style. The table – packed with a number of built in lock ons, sleeping quarters and its own stereo system – was followed by thousands of marchers from Trafalgar Square who arrived to demand the impossible, many of whom were equipped with pink chairs. As floods, fire and famine break out around the world, it is clear that climate breakdown is here now, and there is no choice left now but to take urgent action. Everyone deserves a seat at the table to have a say in how to tackle the greatest crisis of our times.

The disruptive pink table is set to be the centerpiece of Extinction Rebellion’s Crisis Talks, the first, crucial part of the Rebellion, where the group intends to engage with the general public about the climate and ecological emergency and invite everyone to come to the table to discuss where humanity must go next. Surrounding the giant table and in various locations across London, people have set up their own ‘crisis tables’, pink tables brought with them from home, to invite people across the city to talk about the climate and ecological emergency. Because if our leaders consider holding emergency talks so impossible, then we must do it ourselves.

Linda Doyle, one of the people on top of the table, said: “Across the political spectrum people are expressing the need to change course, by upgrading democracy and our economy so that they are designed to protect life and work for us all. A recent global survey found that 74% of people want the climate crises and protecting nature prioritised over jobs and profit.[1] The majority of people want urgent action and understand we must make major changes to do so, by denying that government’s are working against the will of the people.

“If governments continue to fail us when climate breakdown is happening everywhere we look, ordinary people have to take matters into their own hands, rebel for life, and demand a new political economy designed to put the wellbeing of people and the planet first.”

The location was chosen in order to counter the media bombast that Extinction Rebellion aims to cause “chaos” across the capital. Chosen for its high footfall, the table will capture people passing by without creating “chaos” for the general public. The location is just the first of the occupations to be taken during the two weeks, alongside public ‘Welcome Hubs’ in 4 locations across London for new people to get trained, learn more about the movement and how to take nonviolent direct action. The hubs are in Piccadilly Circus, Bethnal Green, Liverpool Street, and Monument.[2]

Charlie Waterhouse of the Extinction Rebellion design team said: “We are inviting everyone in Britain to come to the table and have the kind of grown-up conversations government, industry and the media are refusing. When those in positions of power are incapable, it is the responsibility of the people to step up. We are in the greatest crisis humanity has ever faced, and Extinction Rebellion are calling crisis talks.

“Only the common sense of citizens and the wisdom of global perspectives will navigate the impossible decisions ahead, and that navigation starts today, on the streets of London. Government, industry and the media want to keep us divided, but we must not fight each other, we must unite in survival solidarity.”

Alongside engaging with the general public, Extinction Rebellion will be asking people to join them in demanding the politically impossible by rebelling in the City of London – a root cause of the crisis – until the UK Government agrees to immediately stop all new fossil fuel investments. Following the release of the latest IPCC report which warned that we are in a ‘code red for humanity’ situation, and the International Energy Agency warning in May that we must stop all new fossil fuel development now to stay within the 1.5 degree threshold, it is clear that before we begin to repair the damage done to our planet, we must immediately stop making it worse.[3][4] Stopping all new fossil fuel investment is the first, obvious step to doing so.

Gail Bradbrook, Extinction Rebellion and Money Rebellion cofounder, said: “Our leaders in Government and Business have been failing us for years, they are taking us over a cliff. If they are in any way serious about tackling this existential crisis then they would immediately stop financing fossil fuels, because continuing to pour petrol on a fire is an obvious sign of insanity.

“Why don’t they act? They are wedded to a corrupt political economy, centred in the City of London, that extracts vast profits from communities and nature, and depends on destructive economic growth for its survival. We need to tell the truth, humanity has to change course, we have no choice.”

COP26 in Glasgow is only a few months away and the UK Government has shown few signs of true climate leadership, with Greta Thunberg accusing them just last week of lying about their climate success.[5] If World leaders don’t have the collective imagination needed to find a way out of the climate and ecological crisis that puts the care and wellbeing of people and planet first, then people need to be given a seat at the table to find a way forward. Extinction Rebellion urges everyone to join us in making the seemingly impossible inevitable right now, on our own terms, instead of legitimising failed processes like the COP summit by waiting for it to make the decisions.

The Impossible Rebellion will continue throughout the next two weeks, with direct actions, solidarity marches, talks, trainings and more scheduled throughout.[6]