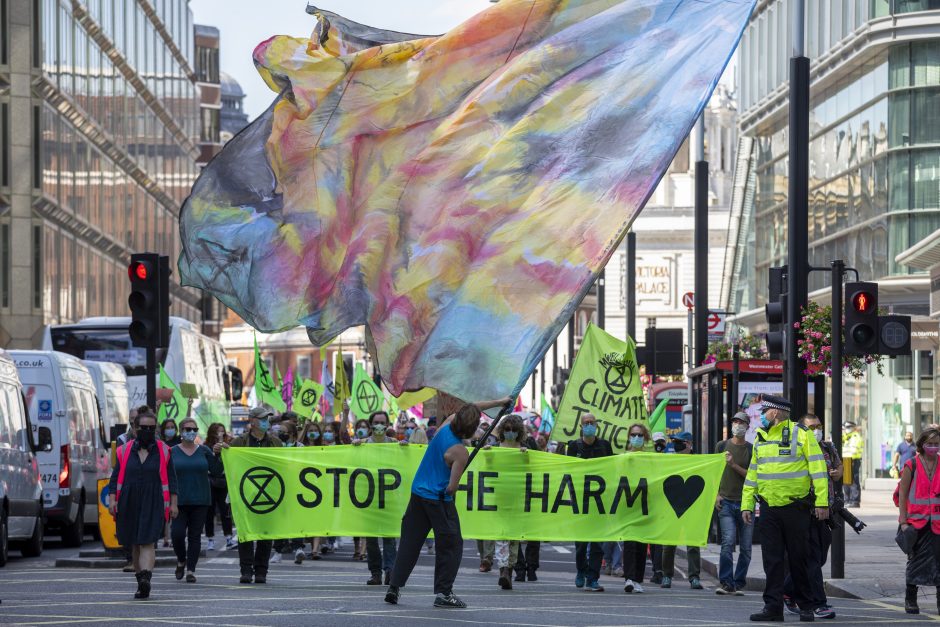 “May this decade bring more than just solutions, more than just a future – may it bring words we don’t know yet, and temporalities we have not yet inhabited. May we be slower than speed could calculate, and swifter than the pull of the gravity of words can incarcerate. And may we be visited so thoroughly, and met in wild places so overwhelmingly, that we are left undone. Ready for composting. Ready for the impossible.”
– Bayo Akomolafe

To coincide with the release of the 6th Assessment Report from the IPCC this morning, Extinction Rebellion UK has launched plans for 2 weeks of civil disobedience in London, beginning Monday 23 August.[1] Because the future we fear is already here and there’s nothing left to do now but act.

On impacts, the IPCC confirms what has become obvious: from heatwaves, to flooding, to droughts, every region on Earth is experiencing unprecedented weather extremes because of the CO2-jacked climate. Tropical cyclones are also intensifying and moving north. The IPCC also confirms that the land and oceans are on course to be – if they aren’t already – a net source of carbon emissions even in the lowest possible emissions scenario. The Earth’s carbon drawdown ability which has bailed us out for so long is hugely weakened.[2]

Professor Jeff Waage OBE, of the University of London, said: “The IPCC’s ‘Climate Change 2021: The Physical Science Basis’ reveals recent advances in scientific research that have substantially opened the black box linking human activity and climate change, confirming unequivocally that human actions are the principle cause of the new floods, droughts, fires, ice melt, sea level rise and other climatic disruptions that we are seeing today. It makes clear that there is no going back now on some of these trends, and that we are firmly locked on an escalator of increasing severity and frequency of climate tragedies as long as we allow global warming to continue.

“With improved scientific hindsight, the report shows that our planet is suddenly in a new and unknown climate space that it has not experienced for thousands, possibly millions of years, with the risk of disastrous tipping points increasing as we continue our current greenhouse gas emissions. The IPCC report does not indulge in politics, but its five modelled scenarios show that, were we to implement current “net zero” commitments fully and honestly, global warming might stay just below 2 degrees. Since we are not at all on track with that ambition, we are more likely heading now to 3 degrees or more. The report shows us what to expect from that, not just globally but in every region of the world. This must prove an incentive for meaningful and urgent action at COP26 to move much more quickly towards Net Zero.”

Beginning on Monday 23 August, Extinction Rebellion will take to the streets again, with plans to disrupt the City of London to target the root cause of the climate and ecological crisis – the political economy – until the UK Government agrees to implement our new, immediate demand: that the UK Government ‘stop all new fossil fuel investment immediately’.

Since the Paris Agreement was signed in 2015, money being invested in fossil fuels has increased, not decreased, with investments continuing despite the International Energy Agency saying in May this year that all new fossil fuels investments must end immediately if we are to stay below 1.5 degrees of warming.[3][4] Ahead of hosting COP26, the UK Government has shown time and time again they are not serious about facing up to the climate and ecological crisis. If they are to show global leadership, they need to do what they should have done years ago – end finance for fossil fuels NOW. We have so far to go, this is the first obvious step.

Clare Farrell, co-founder of Extinction Rebellion, said: “We are in the midst of a collective act of global, social evil which is unprecedented in all of history. We spend more time measuring it than trying to stop it, this is in and of itself a crime.

“We don’t need any more data to tell us how bad it is, we need to understand how change works. The time to work together is now, mass movements can create rapid change and we are in open rebellion until we see real action. This government is a joke, telling us how to wash our dishes when they should be leading the world towards a mobilisation that saves humanity. The UK has a duty to set a good example and other countries will follow. People want to live, but we need leadership and it’s nowhere to be seen. So join us, and we will be the leaders we need. Disobey the system that is killing life on earth.”

Under the name the ‘Impossible Rebellion’, this Rebellion will call on everyone to join us on the streets to make the politically impossible inevitable. As floods and fires rage across the world – from Turkey, California and Athens, to London, Germany, China, Belgium and North Korea – it is clear that our climate is breaking down and that change – for better or worse – is coming, whether we like it or not. Taking to the streets together is the only reasonable response to the many crises we now face.

Professor of Ecology and Ecological Economics at the University of Leeds, Julia Steinberger, said: “Extinction Rebellion has been doing tremendous work holding climate criminals to account, from the Murdoch press to Tufton Street dark money lobby groups to the financial actors funding fossil fuel expansion. Being part of XR is one of the few ways I know my actions are in line with my research. I encourage every human who can to join the Rebellion.”

We’re told tackling the emergency at the speed needed is impossible – with the COP summit lacking the mandate to address the economic model that drives the crisis. But we are living in impossible times and an impossible situation demands an impossible response – this is why we rebel.

ACT NOW – BECAUSE IT’S TOO LATE: Disrupt the City of London

By putting pressure on the biggest financial institutions that are fuelling this emergency, we will target those who have a legacy of funding the toxic system that oppresses marginalised communities at home and around the world whilst creating a global genocide.

The richest countries have spent $40 billion more on fossil fuels than clean energy since the pandemic.[5] The opposite of ‘building back better’. As global summits on Climate (COP26) and Ecology (COP15) are coming this Autumn, we have a window of opportunity to influence the agendas and demand our political leaders act like we’re in an emergency. That’s why we will rebel in August until our new Immediate demand; “Stop all new fossil fuel investment immediately” is met. We are out of time, and it’s the most obvious and necessary thing they can do right now.

Everyone will be invited to the table for our very own Crisis Talks. If our leaders consider holding emergency talks so impossible, we will bring people together and do it ourselves. We will occupy spaces to listen and discuss the hard truths: what does crisis mean to you? How is it affecting your community? What can we do about it together?

This Rebellion will be about creating irresistible forces which change the social contexts summits like COP take place in. We will occupy spaces in London, whether it be buildings or roads, to inviting people to come together to talk, to block roads, to paint, to share food, to talk to each other. Because power doesn’t want us to talk to each other, so we’ll make coming together in an emergency a revolutionary act!

Find out more about the Impossible Rebellion here.