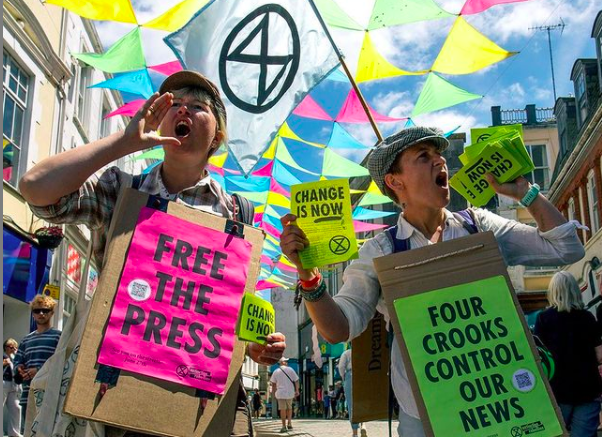 Heading to the Free The Press protest today? Listen to our Rebel Radio Special on your way there to hear some of the media’s latest lies they told us and truths they kept quiet.

Join Rebel Radio host Lindsey Maycock for a recap on Extinction Rebellion’s previous actions to highlight the media’s silence on the real urgency of the climate and ecological emergency. We hear about the reactions and consequences of these actions, and why there is so much more to be done. Jon Fuller and Caspar Hughes take us through some of the shocking recent behaviour of the media: not reporting on major reports and findings on the dire state of our planet and our climate, staying silent on inadequate actions and policies of the government, downplaying how this is going to affect each and everyone of us in only a few years from now.

The media’s role is to inform the public. If they fail to do that, then what is the point?

See you at Parliament Square!

Listen live on Soho Radio London every Tuesday and Friday between 11:00-12:00 | Catch up on all of Rebel Radio’s shows on Mixcloud