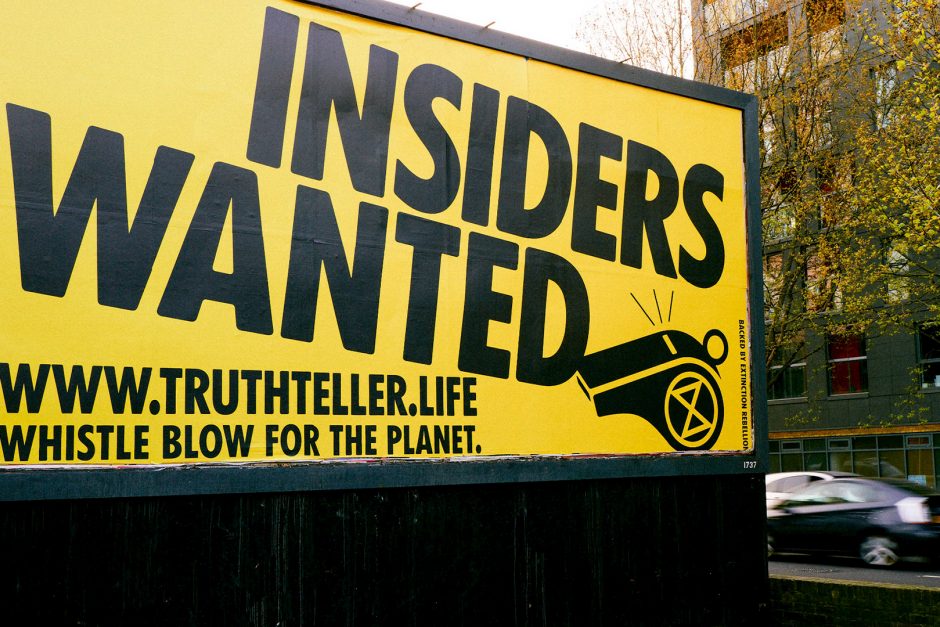 The ads are directed at researchers, scientists and technicians at Shell, Exxon, Total and Chevron and invite them to anonymously share what they know. XR is approaching these particular employees as they are best placed to recognise the gulf between their bosses’ public pronouncements and actual efforts to decarbonise.

The first set of ads follows the acquittal last week of six XR members on trial for criminal damage at Shell’s London HQ. The ads read:

Last week, a jury of fellow citizens decided criminal damage to Shell’s HQ was a fair response to the far greater damage Shell is doing to the planet.

For decades, the company you work for has known the truth about global warming, and hired lobbyists to confuse the public and block action. Shell now claims it’s aiming for net-zero–while still pouring $8 billion a year into new oil & gas, and $50 million on lobbying and spin.[1]

Staff are then directed to TruthTeller.Life, XR’s secure whistleblowing platform which launched in February this year. Any information received via TruthTeller will be published safely and anonymously in collaboration with trusted media partners. (Potential whistleblowers are warned not to visit on a work device.)

The Shell ads are the first in a month-long LinkedIn campaign – backed up by billboards in key locations around London – that will also be served to technical staff at Exxon, Total and Chevron. It builds on an earlier series of ads directed at current and former employees in the fossil fuel sector, and has been made possible following a successful crowdfunding campaign to raise funds for the project.

Like Shell, Exxon also understood the existential threat posed by global warming decades ago when scientists it hired warned of the need for immediate action. Instead, it used the same PRs as the tobacco industry to throw doubt on the science and frustrate international agreement. And just like at Shell, this climate hypocrisy continues today, with Exxon falsely claiming to be reducing emissions when in fact they are set to rise, while it punishes staff who speak up on climate. [2]

French company Total is also greenwashing its climate damaging plans. The bulk of Total’s capital expenditure (around $10 billion per year) continues to be directed to oil and gas projects. By 2030, Total plans for 85% of its energy sales to still be either oil or gas. Meanwhile with its advertising campaigns, it claims its priority is to reduce CO2 emissions and to be investing in carbon capture. In truth, Total’s planned spend on such projects is only 2% of its budget of up to £16 billion until 2025. [2]

XR’s fourth target Chevron, uses the phrase ‘lower-carbon future’ in its advertising. However the company has not committed to reach net zero or to align its activities with the temperature goals of the Paris Agreement, and has no plans to cut its oil and gas operation. Between 2010 and 2018, Chevron dedicated only 0.2% of its long-term investments to sources of low-carbon energy like wind and solar.

In addition to its ad campaigns, the TruthTeller team has also placed unauthorised inserts in the Financial Times titled How to Save It, spoofing the paper’s glossy consumerist magazine How to Spend It and delivered calling card invites through letterboxes in affluent neighbourhoods inviting senior company employees to Whistleblow for the Planet while they work from home.[6]

Zoë Blackler, coordinator of XR’s TruthTeller project, said: “Fossil fuel companies are not decarbonising at anything like the speed required, but you wouldn’t know that from their PR. Behind the spin and the greenwash, even those claiming to be working towards net-zero continue to invest heavily in oil and gas, with only minor investment in renewables. Some companies have not even set net-zero targets, while making vague boasts that suggest otherwise.

“Outside pressure on these companies to take radical action is mounting daily. But for change to happen fast enough there also needs to be pressure from within. Which is why TruthTeller is inviting employees to tell the world what is really going on inside these companies and put their bosses on notice that they are being watched.”

2. Hedge fund Engine No 1 recently warned that ExxonMobile faces an “existential business risk” by pinning its future on fossil fuel. It said the energy company “touts its efforts in areas like carbon capture and biofuels” but those efforts have “delivered more advertising than results”.

3. From Client Earth’s Greenwashing Files: “Although Total’s advertisements focus on new green tech and innovation, between 2015 and 2017 the reporting estimated it spent only 0.7% of its revenue on low-carbon technology research and development. Overall, analysis estimates that 50% of Total’s planned new projects from 2020-22 are inconsistent with an International Energy Agency scenario assessed to provide a 50/50 chance of keeping warming to 1.6°C.  Whilst commentators recognise Total’s rapid growth in renewables capacity, they also highlight that the bulk of Total’s capital expenditure continues to be directed to oil and gas projects, most recently in Mozambique, Russia, Brazil, the United Arab Emirates, Australia and Louisiana.”

4. In March a complaint was filed with the US Federal Trade Commission that Chevron is misleading consumers about its efforts to reduce greenhouse gas emissions. Chevron’s pledge of “ever-cleaner energy” amounts to so-called greenwashing because it hides the reality that the company’s production plans may end up increasing absolute emissions, according to the complaint.

7. Whistleblowing activity is on the rise, according to auditor and risk consultant Deloitte, “in ways that should have the focused attention of compliance executives across industries”. It identifies working from home as one of the primary causes, and advises firms among other things, to improve their whistleblower support programmes. The TruthTeller launch was covered in the FT and the Times. The launch press release is here: https://bit.ly/2Za9jCq

You are receiving this email because you are a member of the press and your email address is published online.