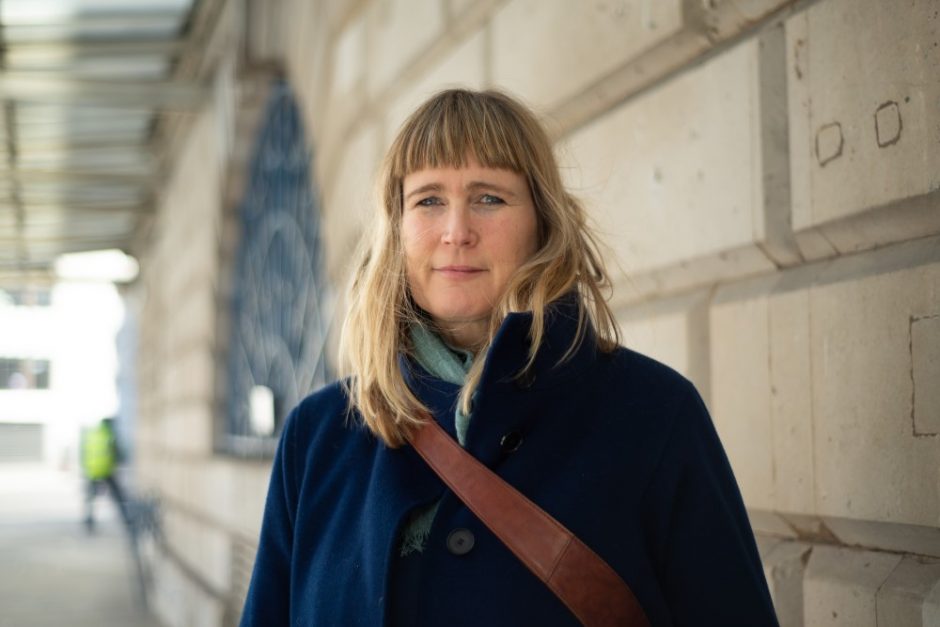 Joanna was arrested on 17th April 2019 on Waterloo Bridge during the 2019 April Rebellion under Section 14 of the Public Order Act, but was not charged. She was arrested again on 11th October while locked on to three others in Trafalgar Square during the 2019 October Rebellion and charged with Obstruction of the Highway. She was tried on 9th March 2021 at City of London Magistrates’ Court, found guilty and given an absolute discharge plus court costs, because of the time it took for her case to come to court.

“I was in court for my trial as a result of my second arrest as part of the October Rebellion 2019, along with Rob, a retired carpenter and Nat, a wonderful artist.

After a full day, the judge returned a guilty verdict yet at every opportunity he could gave us a nod of support. I spoke through tears at the end when I offered my mitigating circumstances. I talked about honouring Polly Higgin’s life (she was a good friend of mine as well as an inspiration) and all life in bringing the defence I did of necessity and conscientious protector.

In his sentencing the judge said tears are not a sign of weakness but are a sign of strength and passion. He said he couldn’t voice his opinion of our actions yet went on to detail three examples going back to the 1800’s of how the law has been changed in response to protest being taken in the form of breaking laws.

One of those being the suffragettes. (People were uncomfortable about their actions back in the day and now history has reframed them and their actions.)

The judge also said several times that climate change is fact rather than belief, as belief was referred to in our defence of necessity and used by the prosecution. The judge was visibly moved as he sentenced us and spoke often of our integrity as well as exemplary behaviour in the court and good character.

I’m very grateful to have had the opportunity to have my voice heard. I self represented and was able to speak from my heart and present my defence and say all I felt called to about what we are facing.

I see us as a society responding to the threat of COVID yet we are not responding in any meaningful way to this much greater and longer term threat. It felt so good to feel connected in to a wider web of support all of which is important and needed. That is what gave me the courage to do what I did in the first place (I’m not a natural rebel!).”