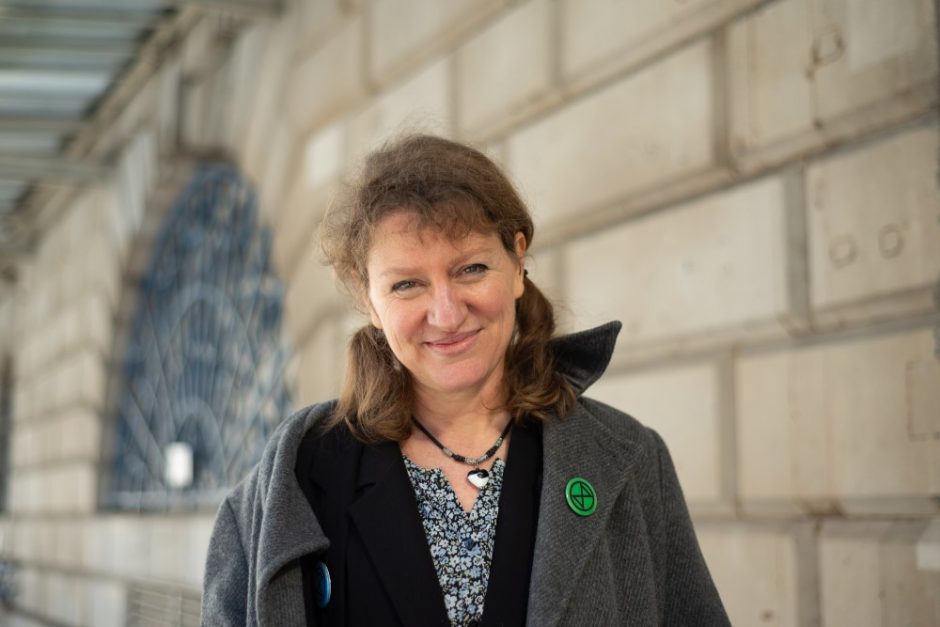 Nat, an artist specialising in woodcut prints of wildlife subjects and the single mother of two teenage girls, was arrested three times during the 2019 October Rebellion. Her first arrest, under Section 14 of the Public Order Act, was while locked on to fellow rebels in Trafalgar Square. She was charged instead with Obstruction of the Highway and tried on 9th March 2021 at City of London Magistrates’ Court. She (along with fellow defendants Rob Tressider and Joanna Robbins) was found guilty but given an absolute discharge (due to the delay in the trial coming to court) and minimal court costs.

Her second arrest, also in Trafalgar Square during the October Rebellion, was under a Section 14 order that was later ruled unlawful in the High Court. She is now persuing a civil case against the Metropolitan Police. Her third arrest was whilst glued onto the ground on Whitehall. She was charged under Section 14 and pleaded not guilty, but the charge was later dropped folowing the High Court ruling.

“Your honour there is one part of the prosecutor’s argument that I feel is fundamentally flawed.

That is ‘that I must have known that my actions could have no meaningful impact on the threat of climate change’.

As an individual this may have been the case, but I have never agreed with the Thatcherite view that ‘there is no such thing as society only individuals and their families’. It is partly that attitude that has got us into this terrible mess. None of us would survive if it wasn’t for the fabric of society. Is not this court of law here as a keystone of that society?

Just as you are now acting as part of a community which you serve, so were we. Our actions were a small piece of a bigger plan that was extremely effective. The actions of Extinction Rebellion in 2019 put the climate emergency at the top of the political agenda and awakened millions of people to the climate crisis. We are not lone wolves. We are part of Extinction Rebellion.

I’m guessing that this courtroom has heard many excellent speeches from XR rebels outlining the climate catastrophe and why they felt they needed to act with urgency and desperation, breaking the law.

So, I apologise if you’ve heard some of what I am about to say but I’m going to start with one nugget of information that I’ve heard many scientists use that never fails to shock me and is utterly terrifying.

Scientists calculate that the amount of heat energy that we are currently adding to the environment is equivalent to that of five Hiroshima bombs exploding EVERY SECOND.

That’s 300 Hiroshima bombs every minute – which is about as long as I’ve now been speaking.

By this time tomorrow a further 432,000 Hiroshima bombs worth of energy will have been added to our world. And so it goes on.

I calculated that since the three of us decided that this situation is so desperate that we needed to act with due urgency on that October morning in 2019, the increase of energy has been equivalent to that of about 220,320,000 Hiroshima bombs.

It’s almost impossible to wrap one’s head around the enormity of this. It’s hard to accept isn’t it?

The problem is a nuclear bomb impacts a targeted location and therefore releases its energy in an intense blast. We can see that to witness such an explosion would be terrifying right?

The energy increase due to global warming however is impacting the area of the entire globe so to our perception it feels incremental – which is why it is so deadly and why we acted as we did as part of XR’s drive to sound the alarm. Because clearly it isn’t incremental. The speed and magnitude of this energy build up is mind blowingly huge.

Can you imagine that if a rogue nation was randomly dropping five Hiroshima bombs every second that we would be in this courtroom right now debating whether or not we were right to protest about it? If a rogue nation had bombarded the planet with 220,320,000 Hiroshima bombs since then we would be cowering in a bunker and praying for it to stop. You might all be thinking in fact we’d probably all be dead. And therein lies the crux of this matter. You can’t add 158,000,000 Hiroshima bombs worth of heat energy to the planet every year without it having dire consequences. Let’s get real. Death is what we’re facing. Untimely death. Yours, mine and most devastating of all for me as a mother, that of my children.

So what’s happening to this heat? How is it killing us and all the other species on this ‘living planet?’

Well, so far much of it has been absorbed by the oceans.

And it’s not just marine species that have so far been engulfed in this apocalypse. The oceans have thrown this heat energy back at us land dwellers in the form of ever more powerful and frequent hurricanes and typhoons. Last year was another record breaker in terms of the number of named Atlantic storms. The meteorologists were well into the Greek alphabet by the time the season came to an end.

How many times have we heard the term ‘unprecedented’ in relation to weather events lately? It seems we’re in a record breaking period for record breaking! Floods, wildfires, droughts, hottest temperature, cold snaps, like that in Texas recently.

So, what’s that about: cold snaps from global warming?

Well that’s the part that scares me the most as it’s a symptom of what else is happening to the heat energy – and it will eventually lead to world-wide famine.

You see the Arctic is heating up much faster than the rest of the world and this is slowing the jet stream. How? Well, the jet stream is powered by the heat gradient between the equator and the pole. The air moves from where it’s being heated at the equator to where it’s being chilled at the pole. Because of the spin of the Earth it gets deflected to the right which sets up the jet stream. But now the difference between the temperature at the Arctic and at the equator is significantly less so the jet stream has much less momentum and instead of being a fast undulating river of air rapidly pushing weather systems across the bread baskets of the world – sunshine and rain, great for growing crops – it’s now a slow broken mess that meanders far south dragging the polar vortex with it, and sets up a blocking pattern of pressure systems that just sit and sit. Under the high pressure we get wall to wall sunshine – leading to drought. Under the lows we get endless rain leading to flooding. And because a warmer atmosphere holds more water the deluge is more intense.

Last year ‘unprecedented’ flooding devastated rice crops in China, which had to place its biggest order of imported grain ever.

But that’s not all.

Some of the heat energy has gone into melting the ice. The amount of energy it takes to turn 1kg of ice into water will heat a kilo of water to 70 degrees centigrade.

And the sea ice has nearly gone. Scientists expect the first dreaded Blue Ocean Event in the next few years – maybe this year. What next then, boiling seas?

Well in fact the Arctic ocean is bubbling – with methane. 1,400 gigatonnes of carbon is locked up in methane and methane hydrates under the Arctic sub-marine permafrost.

And most of the Arctic sea is extremely shallow, facilitating its melt and release.

And methane is 84 times more potent as a greenhouse gas.

And I could go on and on because this is just one of the many feedbacks that make the IPCC predictions so woefully conservative. The IPCC, which informs our governments still has datelines such as 2050 and 2100 in its trajectory. 2 degrees warming is already baked into the system.
2050? Long before then we will be in a food crisis. Millions of people will be trying to flee the worst hit areas. There will be carnage.

2100? Unless we find a way to turn back time and suck vast quantities of CO2 back out of the atmosphere and replace the forests that are still being hacked down, and of course now are burning too, then the New Years Eve of 2100 will be a silent one. No people, no birds, no insects, no creatures. The 6th Mass Extinction is the most rapid to take place on this planet. Since I was born we have lost over 60% of the Earth’s biomass.

Are people aware of this? I think most would still call me a doomer. But I’m only repeating what the scientists are telling us. And yet governments are still talking about economic growth. This is madness!

Back in October 2019, awareness was even less. We have at least had some success at pushing the Overton window of imminent climate catastrophe. This is so important – knowledge is power.

This is why I felt it was my responsibility to act with pertinent exigency on the 11th of October 2019. ‘Tell The Truth’ is the first tenet of Extinction Rebellion.

And now we need action.”