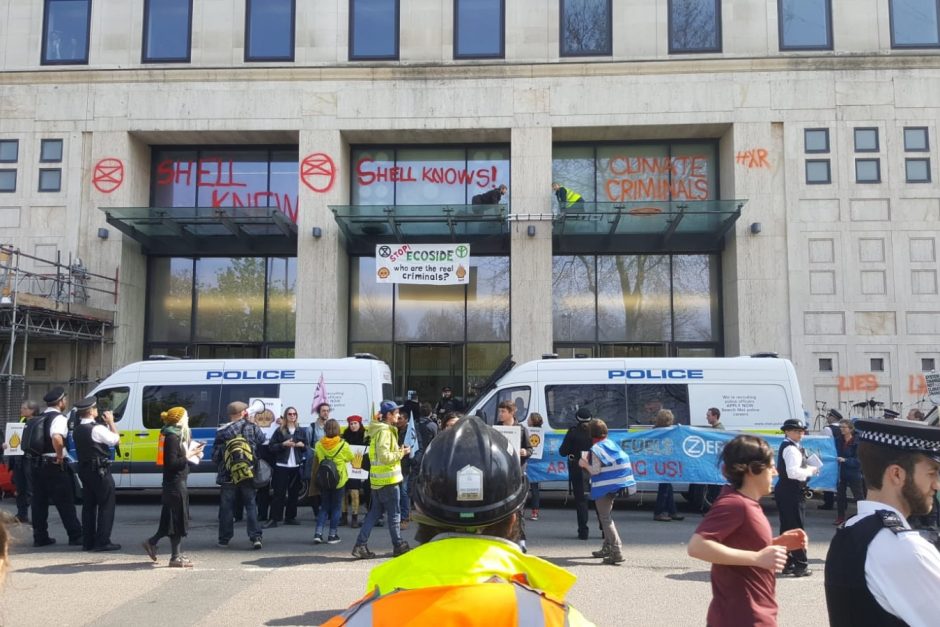 This press release is also available in Japanese, French, Spanish, Dutch and Portuguese.

Monday 12 April 2021, London, UK: Seven people – including two Extinction Rebellion co-founders – charged with £25K worth of criminal damage at Shell’s London HQ will appear at Southwark Crown Court in London for a jury trial. [1] Dubbed the ‘Shell 7’, this is the second jury trial of an Extinction Rebellion related case and comes almost two years to the day since Shell was the focus of non violent direct action when Extinction Rebellion’s April Rebellion in 2019 began.

During the protest – which lasted over 24 hours – activists poured fake oil, glued themselves to the windows and blocked the doors. They cracked several windows, climbed onto a roof, dropped banners and painted the exterior with ‘Shell Knew’, ‘Climate Criminals’ and ‘Lies’.  The activists also sprayed ’Stop Ecocide’ and ‘For Polly 💗’ on the wall of the building. Polly Higgins was founder of the Stop Ecocide campaign and passed away six days later. [2]

With the case expected to take at least 5 days, six of the defendants are pleading ‘not guilty’:

Farhana Yamin, Paris Agreement negotiator and lead author on three of the five IPCC reports, was arrested in the final hours of this protest for gluing herself to Shell HQ and was subject to investigations but the police decided not to bring charges. [3]

There have now been over 3,600 arrests for Extinction Rebellion UK actions since April 2019. Nearly 2,000 (possibly more) have resulted in minor charges (mainly Section 14 offences and Obstruction of the Highway), with around 1,000 prosecutions still in progress. Of those cases that have concluded, more than 900 have resulted in convictions. [4 – Figures are estimates based on available information]