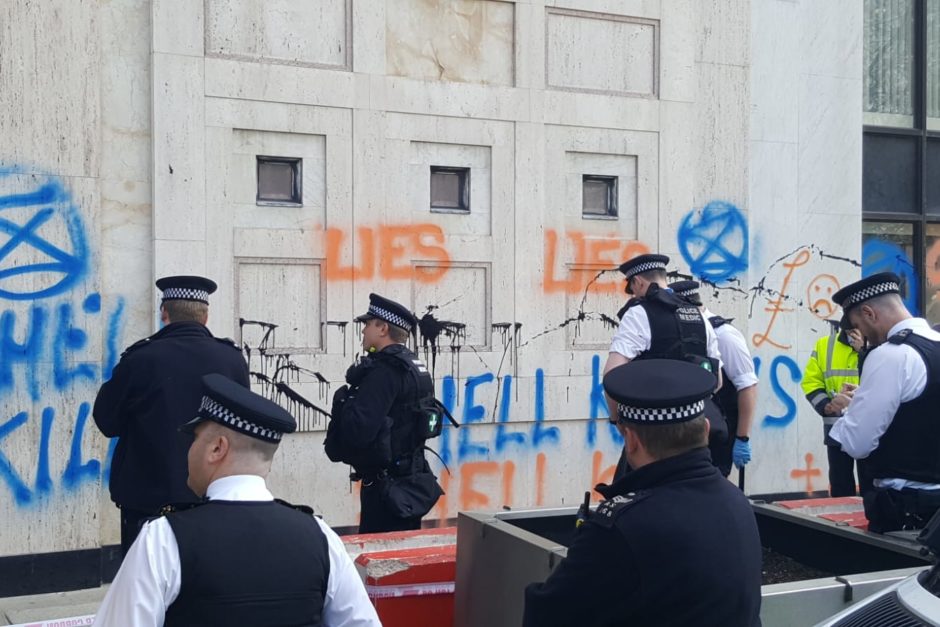 Extinction Rebellion turns up the heat on Shell﻿

Extinction Rebellion turns up the heat on Shell

With thousands of people taking to the streets of London to block high-profile locations across the capital, Extinction Rebellion activists have escalated the campaign to tell the truth. Around 9 Extinction Rebellion activists decided to take Shell and its criminally negligent CEOs to task over their part in the ecocide we are witnessing around the world. At least one arrest has been made.

Ecocide describes “attempts to criminalise human activities that cause extensive damage to, destruction of or loss of ecosystems of a given territory; and which diminish the health and well-being of species within these ecosystems including humans”. [1]

Multiple activists glued themselves on to the windows and blocked the doors in support of Stop the Ecocide campaign. [2] Activists smashed the glass of the revolving doors, with others climbing the scaffolding of the building and have put up a banner that says ‘Shell Knows’. Activists have also spray painted the wall with the word ‘Lies’ and there are people with banners that say ‘Fossil fuels are killing us – zero carbon now’, plus placards with Shell logos corrected to tell the truth.

By intentionally causing more than £6,000 worth of damage, the activists aim to get the case into the Crown Court to put their case to a jury of fellow citizens rather than in a Magistrate’s court where judges sit alone.

For decades, Shell has known of the effects of C02 pollution and its role in the current ecological catastrophe. Yet it has done nothing but cover up and deny the truth about fossil fuels and their effects on our atmosphere. It has spent millions of pounds lobbying against action that could have prevented this unfolding tragedy and has actively undermined renewable targets that could steer us away from the worst effects of ecological breakdown.

The activists stated: “The ongoing ecocide the world is witnessing is a crime against humanity and nature that threatens the very future of life on this world – and still our governments remain silent about the severity of the threat and still the industries that drive this collapse are free to pollute and to steal the future from our children with zero accountability.

“This ecocide can not go unanswered or be allowed to continue; our planet must be protected now. The quickest route to this is to implement new laws that would prevent such crimes against humanity and nature and hold accountable the individuals at the helm of these companies that are driving the likely death of millions and destroying the life support system for all of the natural world.”

“Climate negotiations have failed to prevent the escalating harm. You can’t negotiate with hurricanes, or melting ice caps. A criminal law against ecocide would impose a legal duty on governments to protect the planet’s biosphere.  Realistically, it’s the only reliable way to force industry and society to change direction.

“The only way to realise this in the limited window we have left for effective adaptation is to take high-profile non-violent direct action to catapult the issue into the public arena and put pressure on both government and industry.”

Katerina Hasapopoulos from Stroud said: “Shell is already responsible for destroying lives in places like Nigeria. I’m taking action because our government is inept, Shell cares only for profit and I have three beautiful young girls who I want to see grow up to have a future. That looks unlikely as long as companies like Shell can act with impunity. ”

Simon Bramwell 47, from Stroud, ex-builder and co-founder of Extinction Rebellion went on:

“How can we not act? It’s clear as day that we need to protect our communities, our rapidly vanishing nature and its just as clear that companies like Shell are responsible. They must be held accountable. We are trying to prevent crimes against humanity through our actions.

“Our laws need to prioritise nature, unfortunately our government is handling this crisis worse than its dealing with brexit… we need to change the law and send a clear signal to Shell that business as usual can no longer mean destroying lives or trashing the planet.”

Why is Extinction Rebellion engaging in criminal activity?

Telling the truth is the basis of our legal system. When witnesses take the stand they promise to “tell the truth, the whole truth and nothing but the truth”. Extinction Rebellion takes that oath extremely seriously. Trials that result from acts of criminal damage provide an opportunity to tell the courts that without an urgent and radical change of course, the consequences for humanity and life on earth are likely to be catastrophic.

The British courts have long recognised that there are circumstances where it is necessary to break the law to avoid a greater harm (known as Lawful Excuse). During the Fire of London, for example, people needed to trespass on other people’s properties to prevent the spread of catastrophic fire. The courts recognised that in such circumstances what would normally be a crime was not a crime. [1]

The analogy is obvious. Our house is on fire. The emergency services have broken down. Urgent action is required to prevent the spread of the flames.

Extinction Rebellion supports the campaign Stop Ecocide: change the law which supports the amendment of international law to include a crime of ecocide. More information at https://www.stopecocide.earth/.

[3] The Crown Prosecution Services gives Lawful Excuse to those who “intended to use or cause or permit the use of something to destroy or damage it, in order to protect property belonging to himself or another or a right or interest in property which was or which he believed to be vested in himself or another”.

[10] About Extinction Rebellion
Time has almost entirely run out to address the ecological crisis which is upon us, including the 6th mass species extinction and abrupt, runaway climate change. Societal collapse and mass death are seen as inevitable by scientists and other credible voices, with human extinction also a possibility, if rapid action is not taken.

Extinction Rebellion believes it is a citizen’s duty to rebel, using peaceful civil disobedience, when faced with criminal inactivity by its Government.

Extinction Rebellion’s topline demands are that the: