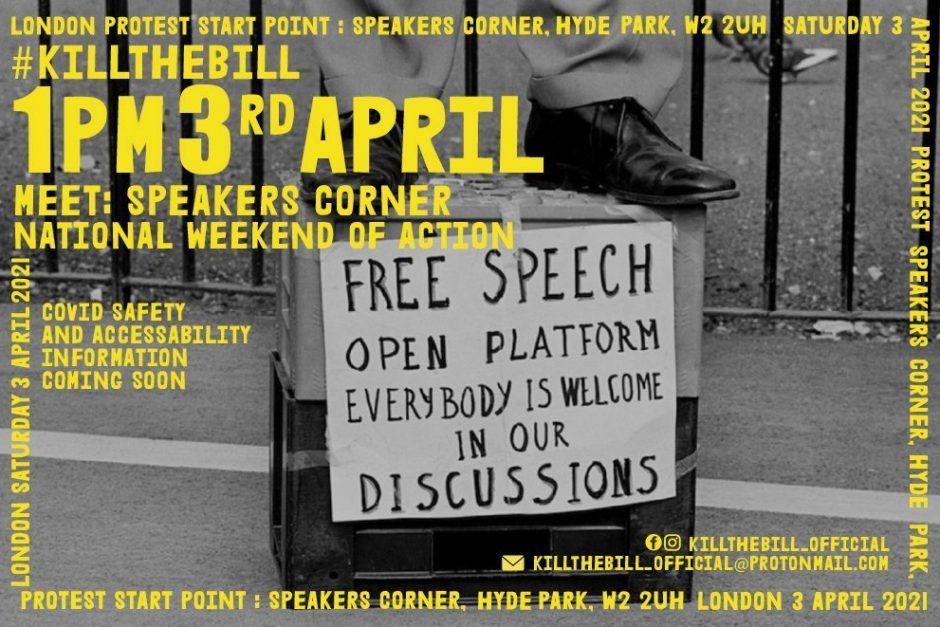 3 April United for our right to protest: Extinction Rebellion, United for Black Lives and others collaborate in national day of action against the Policing Bill

This Saturday 3rd April at 1pm, a large coalition of groups collaborating to oppose the Police, Crimes, Sentencing and Courts Bill will unite around the country to march for the right to protest. Groups include Extinction Rebellion, United for Black Lives, Black Lives Matter local groups and many more. In London people will meet at Speaker’s Corner in Hyde Park for 1pm to march through the streets in a celebration of unity, diversity and protest and in direct opposition to the Policing Bill that seeks to stifle them. See the Facebook event here.

Only united will we defeat this bill.

Speakers on the day include Jeremy Corbyn MP, Bell Ribeiro-Addy MP, representatives from United for Black Lives, and Clare Farrell of Extinction Rebellion and many more. The Protest will wrap up at 5pm.

Three weeks ago, United for Black Lives, Black Lives Matter local groups, Extinction Rebellion and others co-wrote and signed a statement that began the collaboration against the Policing Bill under the ‘Kill the Bill Coalition’. In it they stated that the Bill “appears to be a blatant attempt to create an authoritarian police state, where the voices of ordinary people, particularly those most marginalised and disadvantaged, are silenced by state sanctioned penalties. We collectively decry this move by the UK government and demand that MPs Kill The Bill.”

Marvina Newton, founder of BLM Leeds and United for Black Lives said: “This bill has been created to silence those most marginalised and disadvantaged by taking their democratic rights away from them, only increasing the inequalities we face in the UK. In light of yesterday’s Sewell report which labels Britain a ‘model’ of racial equality, this bill removes our ability to challenge the system that has brutalised, victimised and criminalised Black people in this country.

“This bill has been designed to create more division within our movement, but we come united and ready to fight for everyone’s rights, to have our voices heard and influence and create an equitable society for all. We will not be silenced. They are trying to bury our voices but with this bill we only grow stronger in solidarity. I do this for my children, for my children’s children, and for everyone regardless of their ethnic backgrounds, gender identities, sexualities, faiths, abilities, ages or social standings and I want them to know that I came, I fought and I thrive to create a legacy for change.”

Alanna Byrne of Extinction Rebellion said, “It should come as no surprise that this government has set out to delegitimise protestors when each protest pierces the bubble of complacency surrounding their record on Covid, racial injustice and climate to name but a few. This is the desperate act of a government in denial, to censor the voices of dissent rather than face the reality of the situation we are in.

“As protest is criminalised and our fake democracy is pushed further towards authoritarianism, we seek to find where we can come together with other movements to tackle the common causes that affect us all. We believe strongly that we will only tackle the intersecting crises we face if we find ways to unite against a system that thrives on division, a pervasive sense of powerlessness and that profiteers from people’s suffering. Together we can and will kill this bill.”

The Kill the Bill coalition said: “Already we have seen massive pushback to this bill up and down the country. Demonstrations have sprung up in London, Manchester, Bristol, Brighton, Cardiff and Newcastle. These demonstrations have seen a wide range of activist groups coming together including BLM Groups, feminist organisations like Sisters Uncut and climate groups such as Extinction Rebellion. Although this is a promising start the fight isn’t over yet. It is vital that we keep up the pressure on the government to make them understand that we will not allow our democratic rights to be taken from us.”

Under current UK legislation, police must show a protest may cause “serious public disorder, serious damage to property or serious disruption to the life of the community” before imposing any restrictions. Under the Bill, police forces will be allowed to criminalise protests they believe constitute a “public nuisance”, including imposing starting and finishing times, noise limits, and will be able to consider actions by one individual as protests under provisions of the Bill.

The bill has passed its second reading in the House of Commons, meaning the majority of our MPs are actively voting against our rights and unless we express our dissent, at this point the bill will likely pass.