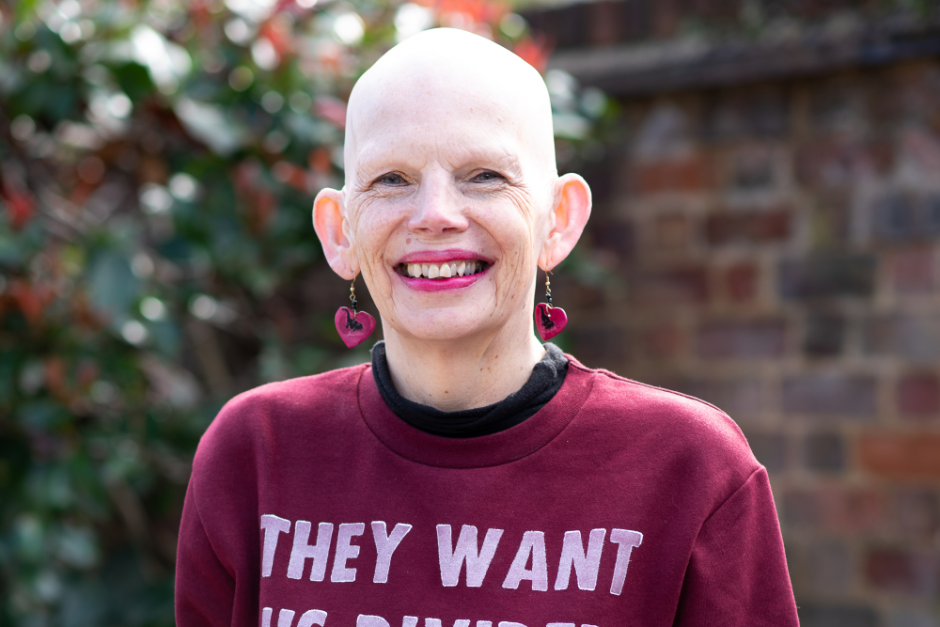 Sue, coordinator for Extinction Rebellion Dacorum and a quaker with alopecia universalis, was first arrested on Waterloo Bridge during the 2019 April Rebellion. She was charged under S14 of the Public Order Act, pleaded not guilty, and was tried in October 2019 at City of London Magistrates’ Court. She was found guilty and give a nine month conditional discharge, and £570 court costs.

She was arrested again, but not charged, for Obstruction of the Highway at the Stop the Arms Fair protest in September 2019, for locking on to block the road to the ExCel Center. She was arrested a third time while glued on to a wooden tower in Trafalgar Square during the 2019 October Rebellion under Section 14. She pleaded guilty and received a six month conditional discharge and £105 court costs. Her fourth arrest was on 1st September 2020 while sitting in the road by Parliament Square during the 2020 September Rebellion. (Her brother, Dave Hampton, the Carbon Coach, once a rower for Great Britain and now the co-founder of Champions for Earth, was arrested within the same hour and taken to the same station. It was his first arrest.) She pleaded guilty by post in February 2021 and received a nine month conditional discharge and £105 court costs.

On 5th September 2020, she was arrested for a fifth time outside the Murdoch-owned printworks in Broxbourne (the Free the Press action) where she was locked on in a spider-like structure of tubes which formed part of the blockade. She pleaded not guilty to Obstruction of the Highway on 5th October 2020 at St Albans Magistrates’ Court. Her trial is due to begin on 14th June 2021 at Stevenage Magistrates’ Court.

I had been a polite, law-abiding citizen all my life, marching for peace as well as ‘the environment’ when I realised that the climate and ecological crisis was not only upon us but terrifying, and that the world’s governments, including ours, showed no appetite for addressing it. Always a follower of Jesus, I’d joined the Quakers in 2017, which consolidated a desire to “attend to what love requires.”

I became a grandma in Sept 2018, and Gail Bradbrook’s words, “We can only protect those closest to us when we remember our love for those furthest away” have stayed with me. When I was first arrested, I went into shock, and I cried at my trial, but I feel compelled to use my white privilege as an older woman to do the MOST I can. I’m vegan, I gave up flying in 2006 and I don’t drive, I’ve changed my bank and electricity and embraced zero waste living as much as possible but none of this is enough. Protest works. Along with Greta’s Climate Strikes, XR has raised the alarm and made a small space for climate in public discourse, but the government and media continue to fail us.

The following is a statement never used, but written while in a police cell after my arrest at Broxbourne.

“This protest was defined by inventiveness, humour and boisterous spirit, with solidarity and song, but it was also an expression of deep, sustained, patient and passionate commitment. Setting aside the Spooks-style excitement and tension, the purpose and its symbolism are profoundly serious.

The printing press we shut down for one night and one day represents so much that must change if we are to survive together, peacefully, as a species on this earth. Some of the papers that never reached their usual retail outlets are more toxic than others: guiltier of inciting racial hatred and hostility towards vulnerable minorities by vilifying and dehumanising refugees and Muslims. Individual newspapers are more or less divisive, manipulative and untrustworthy, but the most culpable provoke violent crime with violent rhetoric. The (70%) domination of the press by the five billionaires concerned, who abuse the power to shape discourse and public opinion with no respect for truth, is enormously dangerous and in itself a threat to democracy. Again and again, Rupert Murdoch has anointed pre-Election the Prime Minister-to-be, and independent analysis of press coverage over recent years shows consistent demonisation of Jeremy Corbyn. This is a malignant oligarchy that sets the BBC News agenda and that of most other UK channels, and has, when fact-checked, been exposed repeatedly for presenting a fake but widely ingested reality. Our papers are internationally scorned.

The papers that never went to print because of our blockade celebrate British ‘scorchers’ without reference to global heating, remain silent as the Arctic burns and the permafrost melts, and pay no attention to the overwhelming scientific consensus that without swift and radical action we face climate catastrophe here in the UK and across the world. Many climate scientists talk of a Sixth Mass Extinction event. Yet these papers’ narrow jingoistic focus fails to acknowledge the suffering and fear of those in the Global South who are already experiencing destructive extreme weather of the sort we don’t yet imagine here. Climate justice is racial and social justice, but the ‘news’ they report shows little interest in such fundamental justice. It is because of the press we targeted that in spite of climate scientists, the IPCC, UN and Paris Agreement, the UK government continues to pursue the very policies that hasten climate chaos, financing fossil fuels at home and abroad, building new roads, expanding airports and bailing out airlines while claiming world leadership. It is because of their lies, vocabulary and evasions that the public doesn’t vote out that government for ecocide shading into genocide. Because of their framing, those who have read the science and committed rationally and emotionally to raising the alarm are seen as the outliers, nutters, doom-mongers, extremists and even terrorists, threatening the ‘business as usual’ from which these barons profit, along with the fossil fuel industry. Business as usual will ensure the kind of horror no grandma wants her grandchild to know.

In Extinction Rebellion we speak the truth and act on it, in our lives and our activism, in the hope that civil disobedience can awaken the public taken in by the media’s climate denial or vacuum. Today’s blockade was an attempt to highlight the role of five billionaires in a conspiracy to lie to and mislead the British people, thus preventing the change that’s so urgent and essential if we are to survive. I am a Quaker determined to do what love requires of me, and serve the truth. It is my sacred duty to rebel.”