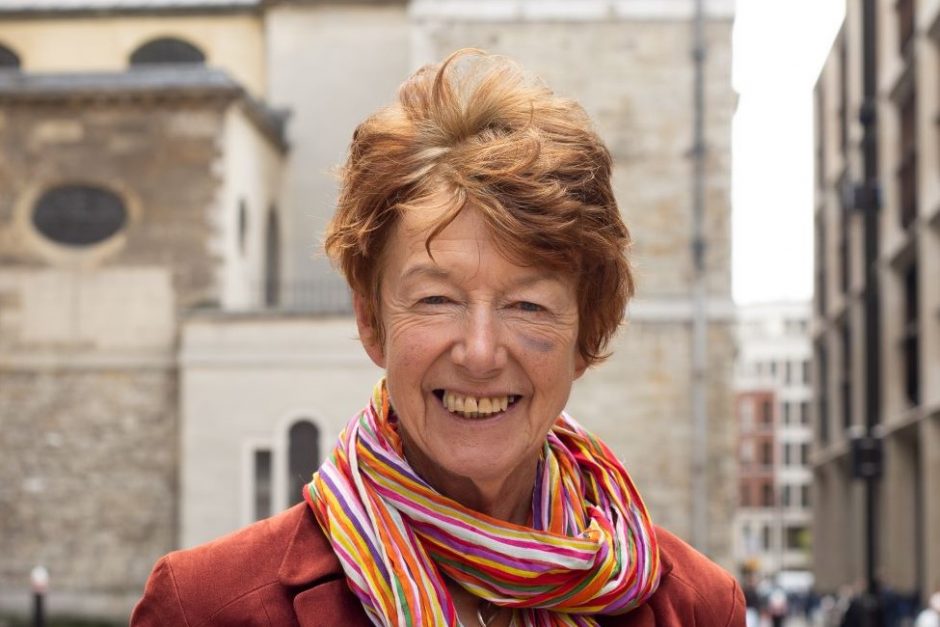 Heather was celebrating her 73rd birthday when she was arrested during the 2019 April Rebellion. She was sitting down to a picnic with her affinity group and had all their food and drink in a rucksack on her back. She pleaded guilty on 27th September 2019 at City of London Magistrates’ Court and was given a six months conditional discharge and £105 court costs. Heather was arrested again during the 2019 October Rebellion and charged with Obstruction of the Highway. This time she pleaded not guilty and stood trial in June 2021. Her conviction was overturned on appeal at the Old Bailey in February 2022.

I was arrested on 18th April, my 73rd birthday, for sitting on the road in Parliament square as part of Extinction Rebellion’s non violent protest. I appreciate the respect and thoughtfulness the police showed to me during the arrest and custody process. I am pleading guilty as I knew I was contravening Section 14 of the Public Order Act.

However, I don’t feel guilty. I chose to take part in the protest in support of Extinction Rebellion’s three demands, acting as a responsible citizen informed by the science of climate change and with compassion for those suffering from the effects of extreme adverse weather conditions due to global warming.

I feel a gross sense of injustice that those countries who have contributed least are most affected. I want our government to take responsibility for our country’s disproportionate contribution to greenhouse gas emissions, excess resource use and habitat destruction and act in ways that show world leadership in commitment to climate justice.

I am a retired child and clinical psychologist, a great aunt, foster parent and lover of nature. I was employed by Great Ormond Street Hospital for Sick Children as Principal Psychologist and then by Hackney and Sheffield NHS Trusts as Consultant Child Community Psychologist.

Today, 27th September is Earth Strike, an opportunity to see ourselves as part of one humanity in an inter-connected world. I am not alone in feeling enormous distress as we witness the suffering of the people whose whole communities have been destroyed by flood, drought and fierce hurricanes like Hurricane Dorian wreaking devastation in the Bahamas.

In March this year, floods engulfed Mozambique, extending into Zimbabwe. We heard about the loss of life, but nothing of the longer term impact such as massive soil loss making bare survival even harder for generations to come, or the 800 people still living in recovery shelters after the cyclone 19 years ago. No wonder increasing numbers of people seek refuge in less affected parts of the world.

I feel increasing discomfort and urgency to act to address the disconnection between our government’s policies, subsidising fossil fuels to the tune of £10.5 billion per anum, and the increasing likelihood of future devastation. Psychologists recognise this discomfort from contradictions as cognitive dissonance. The resolution is either to act, deny the evidence or numb human feelings of compassion. I have chosen to act.

In my 28 years of work in the NHS, the speciality I developed was early intervention and prevention with children, families and communities facing adversity – working out how to hear their stories, build resilience, enhance social support, and address damaged relationships. A key component is understanding how power operates: in society and in relationships and the psychological feelings of powerlessness. I consider the climate and ecological breakdown has brought extreme adversity to many children and communities in the world now and it is our responsibility as mature and responsible adults to listen and to take action to urge our government to act responsibly.

I don’t take lightly non violent action which disrupts the lives of ordinary citizens, but I do consider it necessary. I have a long history of engaging politicians and the public to work for the change required, but the crisis accelerates. I stood as a parliamentary candidate for the Green Party in 1991, sharing platforms with Diane Abbott, and making climate change and sustainability a political issue; in 2004, I co-founded Sheffield Campaign against Climate Change, lobbying and meeting with local and national elected politicians; I participated in the parallel conferences at the international climate talks in Copenhagen in 2009 and in Paris in 2015.

Engaging the public, I trained with Joanna Macey, the eminent eco-psychologist, and delivered workshops highlighting our interdependence with nature and our shared humanity; I brought this work into the Peak District National Park Authority, developing educational programmes for children inspiring them to take action for the environment; I delivered eco-footprinting workshops in the community, developing awareness that while life-style changes can reduce our footprint to double what our planet can sustain, only structural change can reach equilibrium to within our planet’s resources. Now I am involved with local food growing and nature connection projects.

All these initiatives are relevant, but have not brought about the systemic change required, whereas XR is showing itself to be effective. Immediately after the Easter protest, Parliament declared a climate emergency and polling by YouGov indicated that climate change had risen to become the public’s third most pressing concern. Now more than 50% of the UK’s principal authorities have declared a climate emergency.

We are now at the point of damage limitation. My biggest fear is that the elites and powerful in the world, be they countries or billionaires, will continue to grab resources for themselves, with blind indifference to the suffering of those who contributed least. Inequalities are unhealthy for all. The solutions are there if humanity and those in power wake up to the emergency, and chose to act.

I will continue with campaigning, and activities that connect us with the natural world and our communities, and international solidarity. For whatever comes, we will need resilience and connection.

So, as the juggernaut of Business as Usual continues and greenhouse ice melts at 8,500 tonnes a second (4 times the expected rate) being part of an effective campaign to get the government to act for the benefit of all is my justification for sitting on the road as part of the XR blockade of Parliament Square.

Thank you for listening.”

The press reports on Heather’s successful appeal against conviction.