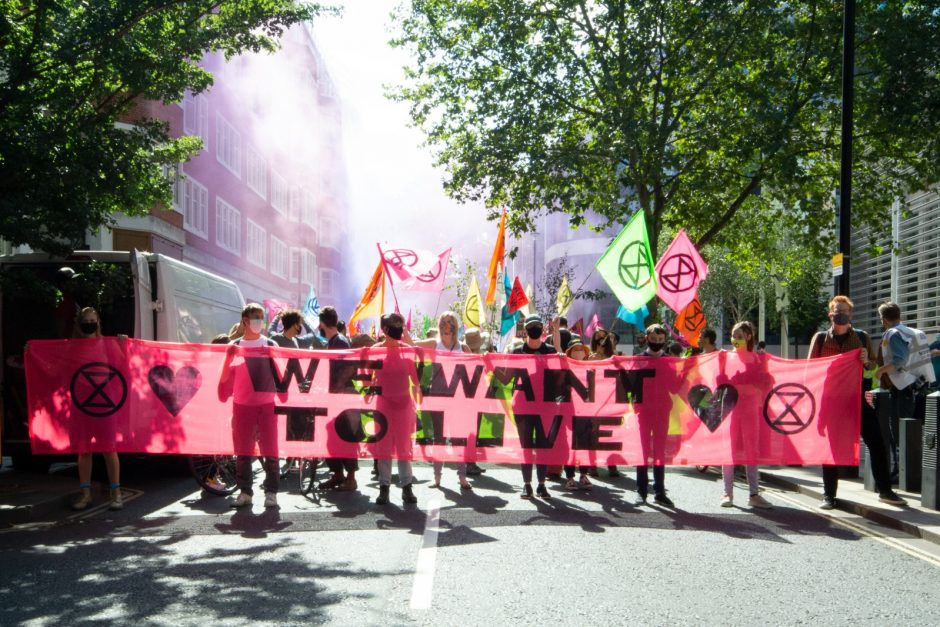 This phase is over – but the Rebellion doesn’t stop here!

With the sun setting on Thursday evening, marchers arriving at Parliament Square were welcomed by a sight for sore eyes. The return of the Pink Boat. Parked right outside Parliament, as a final defiant message to power. It was the perfect way to end weeks where actions around the country catapulted the Climate and Ecological Crisis back into the public consciousness.

We pulled off something quite incredible. We upped the ante, putting the government, mainstream media, think tanks and fossil fuel industry on notice. And we’ve truly rattled them.

The Rebellion in London kicked off with the presentation of the CEE Bill to Parliament. It’s a truly transformative piece of legislation, and now supported by 56 MPs across 7 parties and rising.

There was a carnival of corruption, Parliament blockades, protests at BBC HQ in Cardiff, HS2 rebels up trees, a walk of shame to highlight the financial sector’s colonial and ecocidal past, a march for the ocean, and we told the truth to Tufton Street think tanks. For more, see the brilliant round up video [Coming soon!].

Then there was last weekend, when we really shook the hornet’s nest. By blocking the printworks of several of the UK’s largest newspapers, we not only kick-started a national conversation about the lack of reporting on the true scale of the crisis, we shone a blinding light onto the control the billionaire-owned press has over our political system.

Unsurprisingly, the right wing media are hitting back with everything they have. They’re trying to say we’re weak, divided, and falling apart. But the opposite is true. This Rebellion has shown we are more united than ever. And that’s no mean feat, right? XR has had big growing pains – we’ve done a lot of listening and a lot of learning (and we’ve got loads more to do!), and the past few days have been a brilliantly diverse manifestation of how much we’ve grown up.

So, a huge thank you, and immense amounts of gratitude to every single person who made this Rebellion absolutely incredible.

But the work doesn’t stop here. Rebellion is a part of everything we do, and it’s vital we all carry on. Keep attending and giving the talks and training, keep planning the actions and protests, stay focussed on building up your local group. And remember we all have a crucial part to play in keeping the public informed and continuing the pressure for urgent action. Our canary voices need to be as loud as ever.

Find a volunteer role and jump straight in!

If you don’t have a local group, join one. And if there isn’t a local group, start one! Get to know people in your area, and keep the momentum going.

Keep up to date and join actions, talks and trainings.

Please, keep putting pressure on your MP to back the CEE Bill and join Digital Rebellion to rebel from home.

If you are able to, a small monthly donation will help support everything we do.

The full effects of what we have just done around the country, and on the streets of Cardiff, Manchester and London will probably not become clear for some time – but what we do know for sure is that after the weird months of lockdown (and the even weirder post-October Rebellion analysis) Extinction Rebellion are back!

You beautiful, brave, kind souls. As the Californian skies burn orange, and here in the UK we head into 30 degree September temperatures, we are needed more than ever.

WE ARE THE BOAT