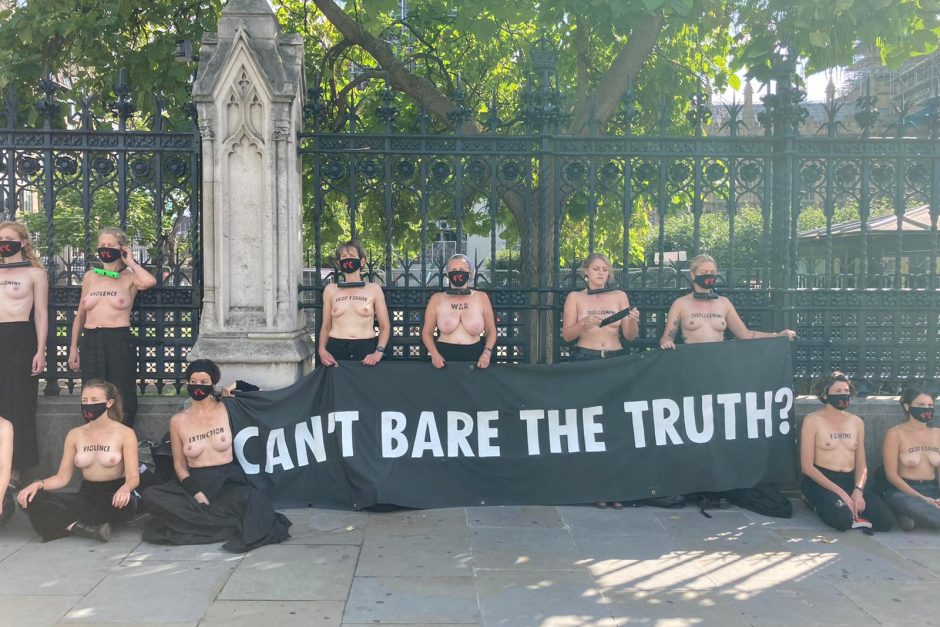 Can’t Bare the Truth? Extinction Rebellion call on Government to communicate the risks of a 4°C world

At 9:30am on 10 September a group of 24 women from Extinction Rebellion have locked-on to Parliament railings using D-locks around their necks, with a banner reading ‘Can’t Bare the Truth?’ and wearing face masks branded with ‘4°C’. Across their bare chests they have exposed the near-term consequences of a 4°C hotter world, including ‘war’, ‘drought’, ‘starvation’, ‘wild-fires’, ‘violence’ and ‘famine’.

The risk is here and the consequences laid bare are immediate threats, already facing many in the global south and the UK this century. Speakers from a variety of groups will be talking about the threats we face as we head towards 4°C of warming and the steps we, our Government and our media, need to take to mitigate the worst effects.

Speeches were given by representatives of the following groups:

The women have taken action to highlight government failure to communicate the severity of the climate and ecological crisis to the public. In June this year Committee on Climate Change, the Government’s official climate advisors, released their report detailing what progress has been made one year on from the adoption of the target to reach net zero emissions by 2050. The report reveals a staggering lack of progress, with only four of the 21 indicators on track and two of 31 milestones reached on the road to net zero emissions. [1]

The report maps the range of climate risks for the UK using 2˚C to 4˚C scenarios with little practical reference to the Paris Climate Agreement’s advised temperature limit of 1.5˚C, advising all departments to plan for “a minimum 2°C rise in global temperature with consideration of 4°C.”

This comes on the day that the UK Climate Assembly, made up of a representative proportion of the UK public, placed ‘education and information about climate change and the steps needed to tackle it’ as the top priority for government, businesses and individuals in the path to net zero. [2]

Teacher and member of Extinction Rebellion Sarah Mintram, who took part in the action, said: “Now we’ve got your attention… By neglecting to communicate the consequences of a 4˚C world – war, famine, drought, displacement – the Government are failing to protect us. Preparing for a 4˚C increase in temperatures is failing the next generation and those in the global south already suffering the most dire consequences.

“We saw last night that the Climate Assembly UK is calling for ‘more education and information about climate change and the steps needed to tackle it’. The UK people are asking for information, so why is the Government staying silent? Why is Boris, his Government and Murdoch’s press empire ignoring the gravity of the greatest threat life has ever faced? This is the truth laid bare. Why don’t they care?”