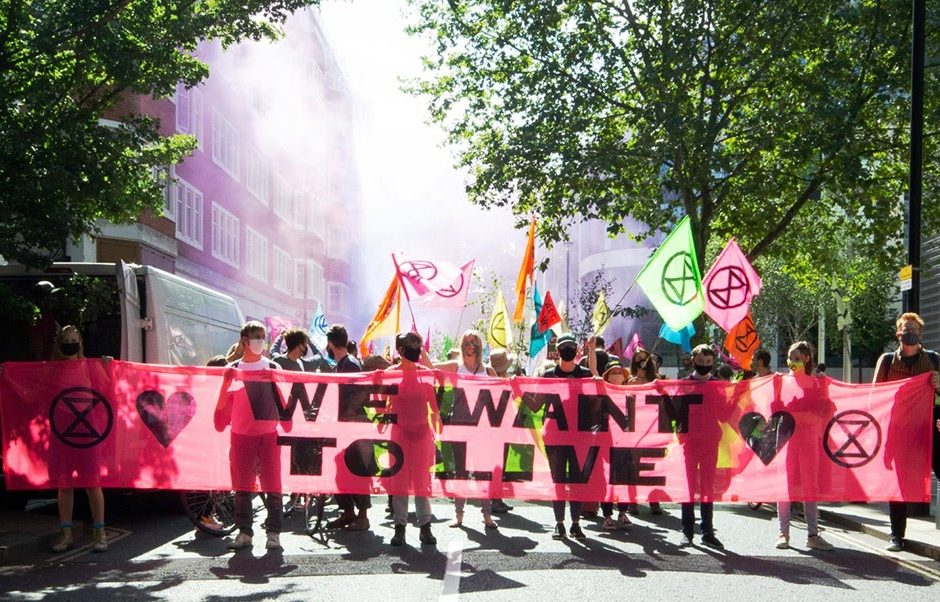 Rebel Daily 1: Boats, Bills and and Boris the Bank Engine 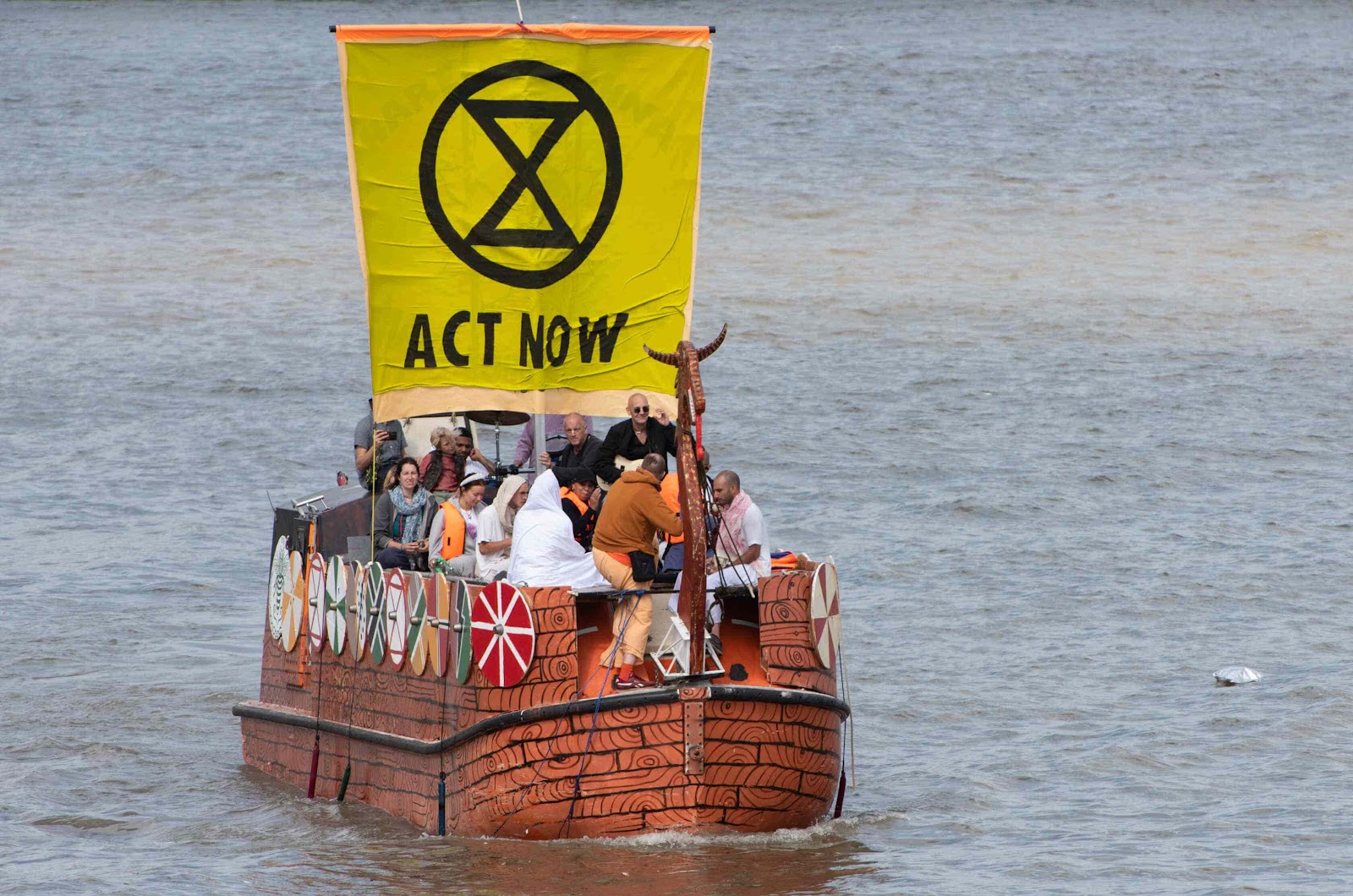 You wouldn’t think we’re out of practice!

Across three cities yesterday, rebels poured onto the roads in carnivals of creativity and disobedience. We’ve only just begun, but what matters is we’ve found the magic once again: parents and their children, teens and retirees, so many people, beliefs and backgrounds, all coming together in a sea of colour, love and empathy.

In Cardiff, things went vertical with climbers on Welsh government roofs opening proceedings for a day of drums and flags.

In London, rebels occupied Parliament Square for a day of disruption, education and dance. Significantly, the day ended on newly agile terms: no site-defending, but an organised dissipation. We’re sure the Met are just as curious as we are to find out what happens next! 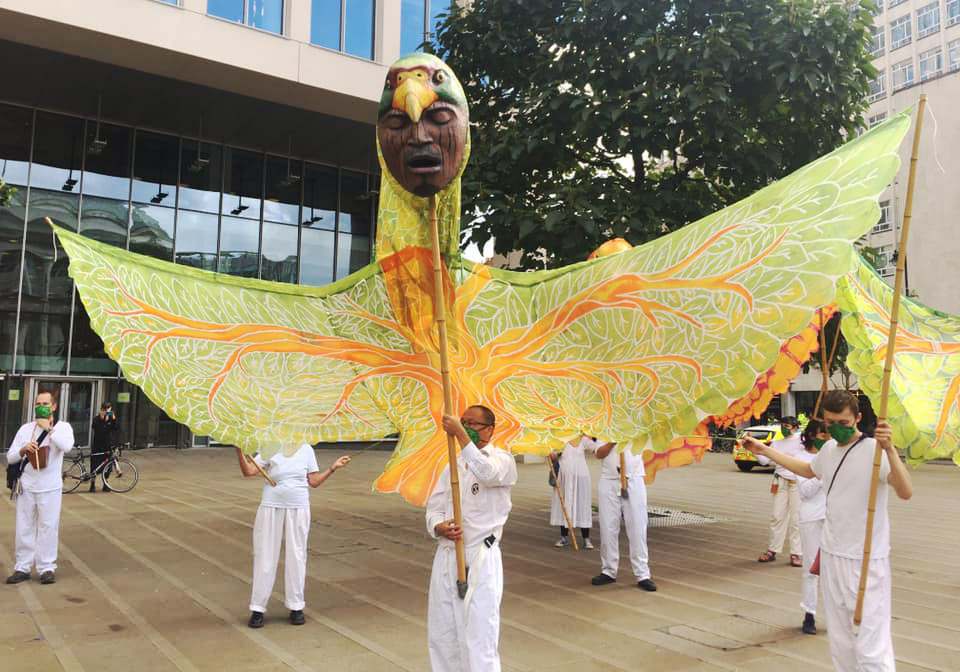 And in Manchester, we can’t begin to list the number and extent of disobediences that went down, from discobedience to die-ins to the Daily Mail.

The beauty and empowering nature of these scenes cannot be separated from the courage and sacrifices that make them possible. London alone has seen 252 arrests (one of 92-year-old John Lynes) so far, with many more undoubtedly to come across the country.

The writers of these words are humbled and inspired by the countless people from all over the UK giving so much for their love of the planet. Whether it’s risking your liberty, giving your time, or supporting others: we salute you. 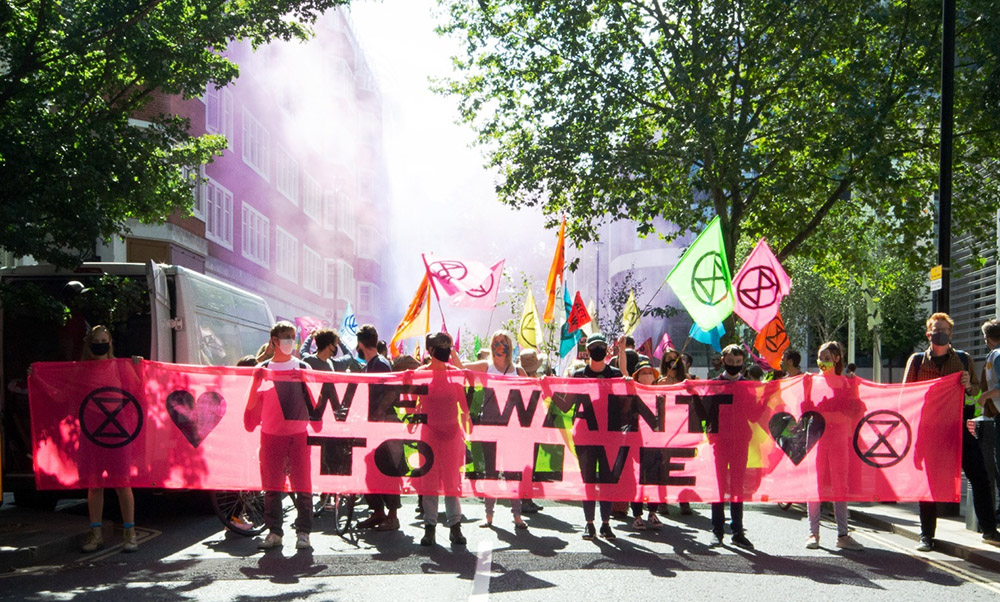 Our work is paying off: our positive, desperate message is already being picked up and amplified, by the likes of the BBC and Margaret Atwood. And this is just the start! Today, our message will echo in Parliament, as the CEE Bill is taken to the House. More to follow!

Speaking of legal matters, fans of the Met’s illegal antics last October may appreciate our legal team’s announcement that they’ve successfully challenged a move to “ban our protests across London” (see announcements for details). 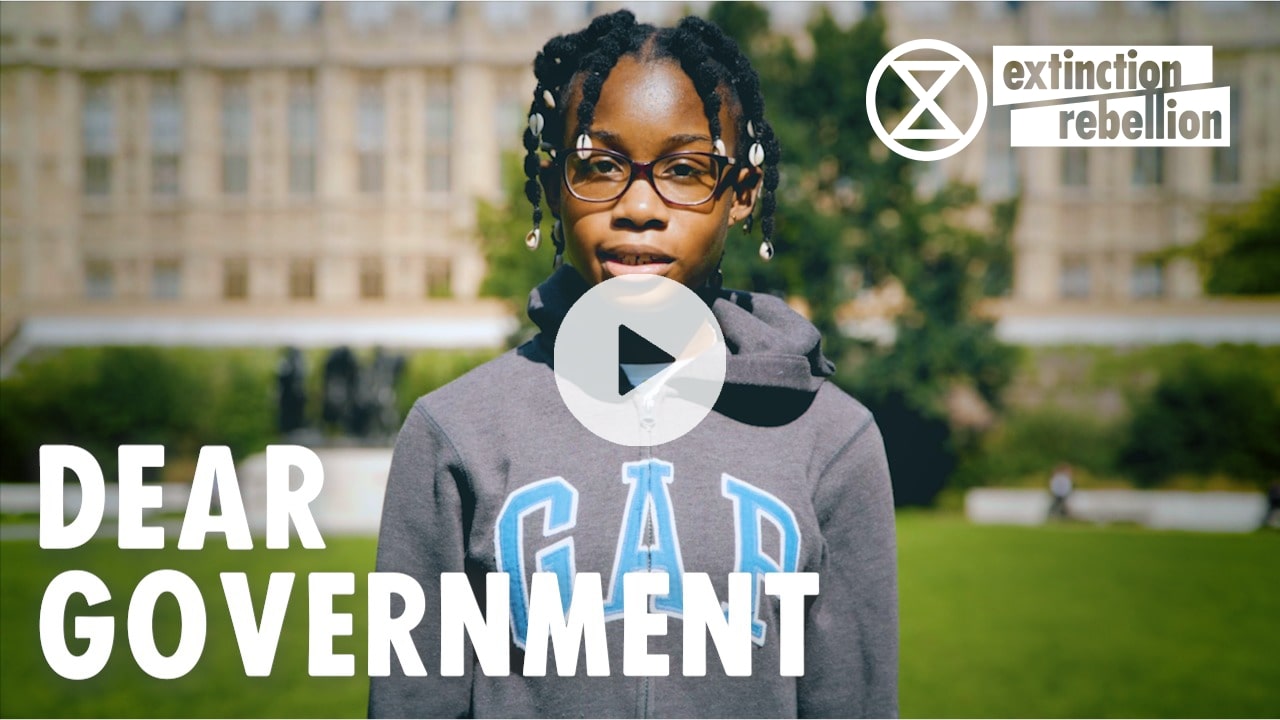 And last but not least, we’re excited to present the first dispatches from the Digital Rebellion, which started at the top with Dominic Cummings and Boris Johnson – and building a warm online community along the way (see below for more).

For a tightly-edited video of the first day’s events, see here. For a photo selection, see here. And if you’re still hungry for more after the stories below, check out today’s XR Unchained, featuring even more local actions from the weekend. 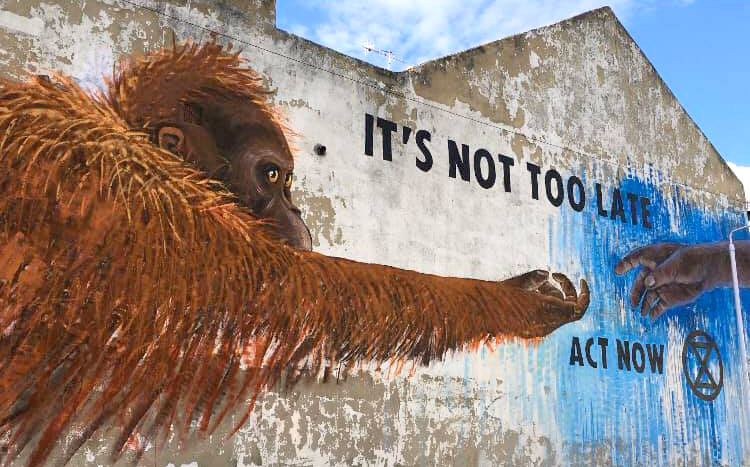 
If you’d like to help, please check out our guide and learn more about XR.

This Rebellion needs your support. Anything you can give is appreciated.

London Launches: Back The Bill! 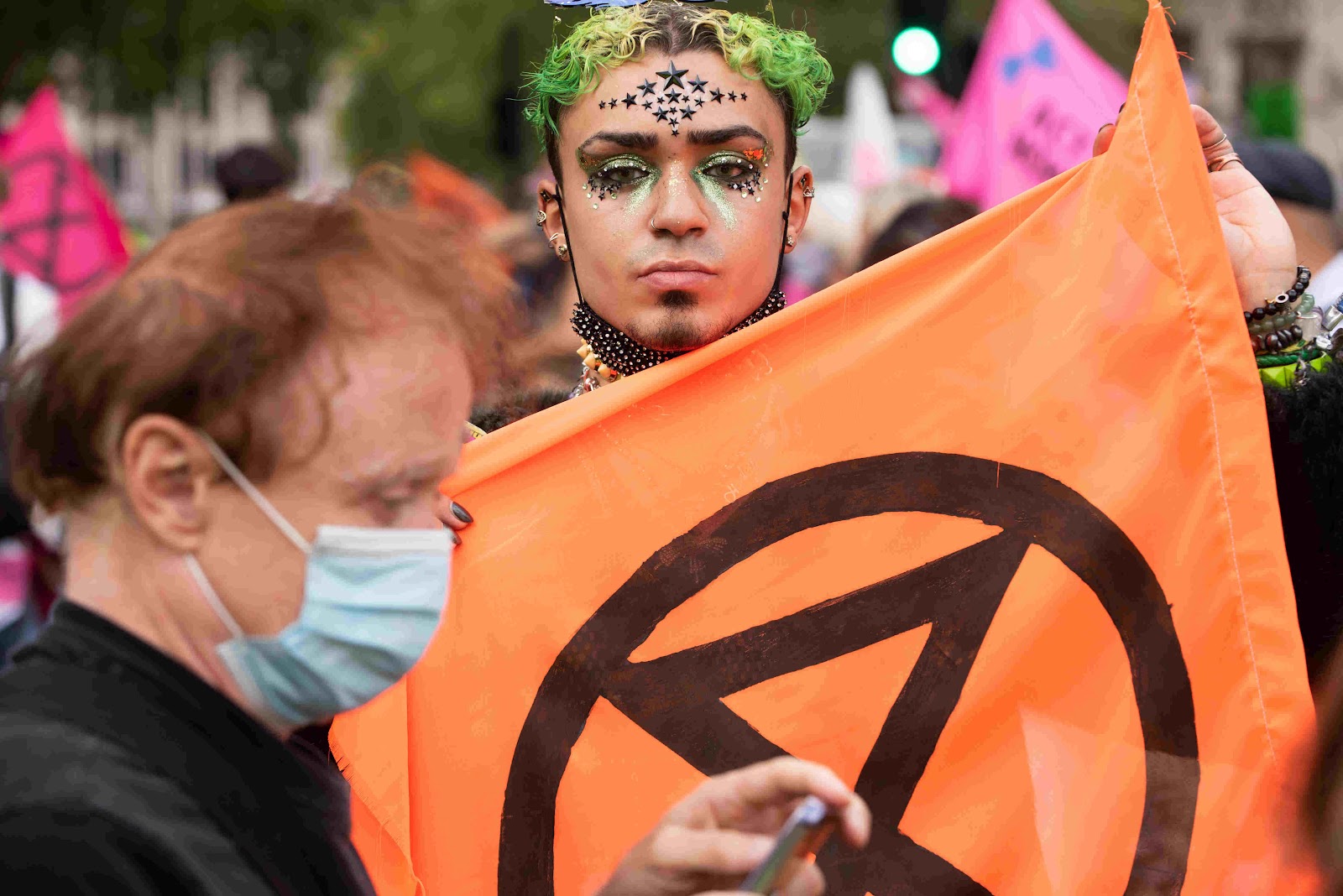 Thousands of rebels descended on the capital for Day 1 of full-blown city-based Rebellion. From 4 starting points, we converged on Parliament Square in an explosion of colour, exuberance and courage. The police didn’t waste any time, and made over 250 arrests before the day was out.

Young and not-as-young sat in the road together, listening to speeches, celebrating our return to the streets and to each other. The CEE Bill took centre-stage, and one brave 11-year-old hand-delivered the bill to MP Alex Sobel in a poignant symbolic gesture. 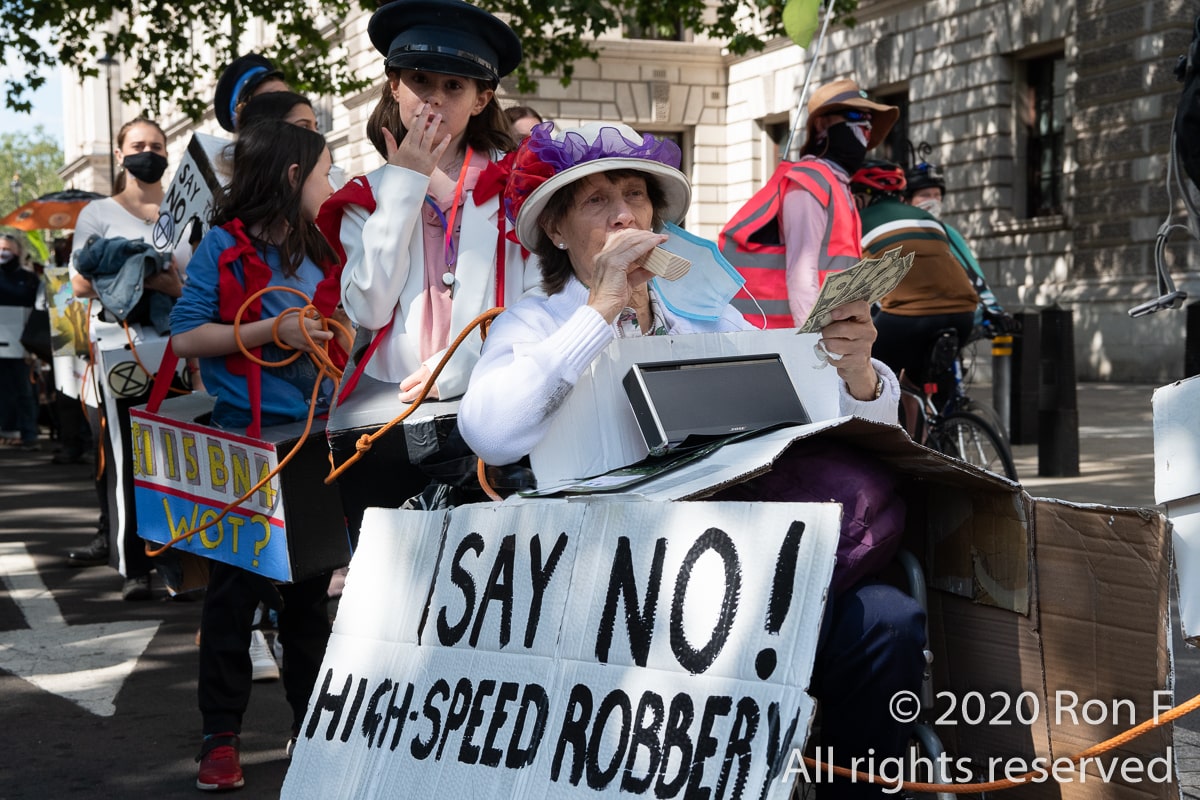 Lucky this engine is powered by pure sass.

HS2 Rebellion turned up in force to demand an end to the mind-bogglingly costly and ecocidal project. A human train of linked carriages made its way through the crowds, as ‘Boris the Bank Engine’ played pantomime villain.

If energy had dipped at all during the afternoon, Animal Rebellion’s arrival to the Square raised spirits and decibel levels. Their march from Smithfield’s market brought another couple of hundred rebels into the mix, boldly demanding a transition to a plant-based food system that treats all beings with fairness and respect. One sign, bearing a drawing of a cow’s face, read, ‘Not your mum, not your milk!’ 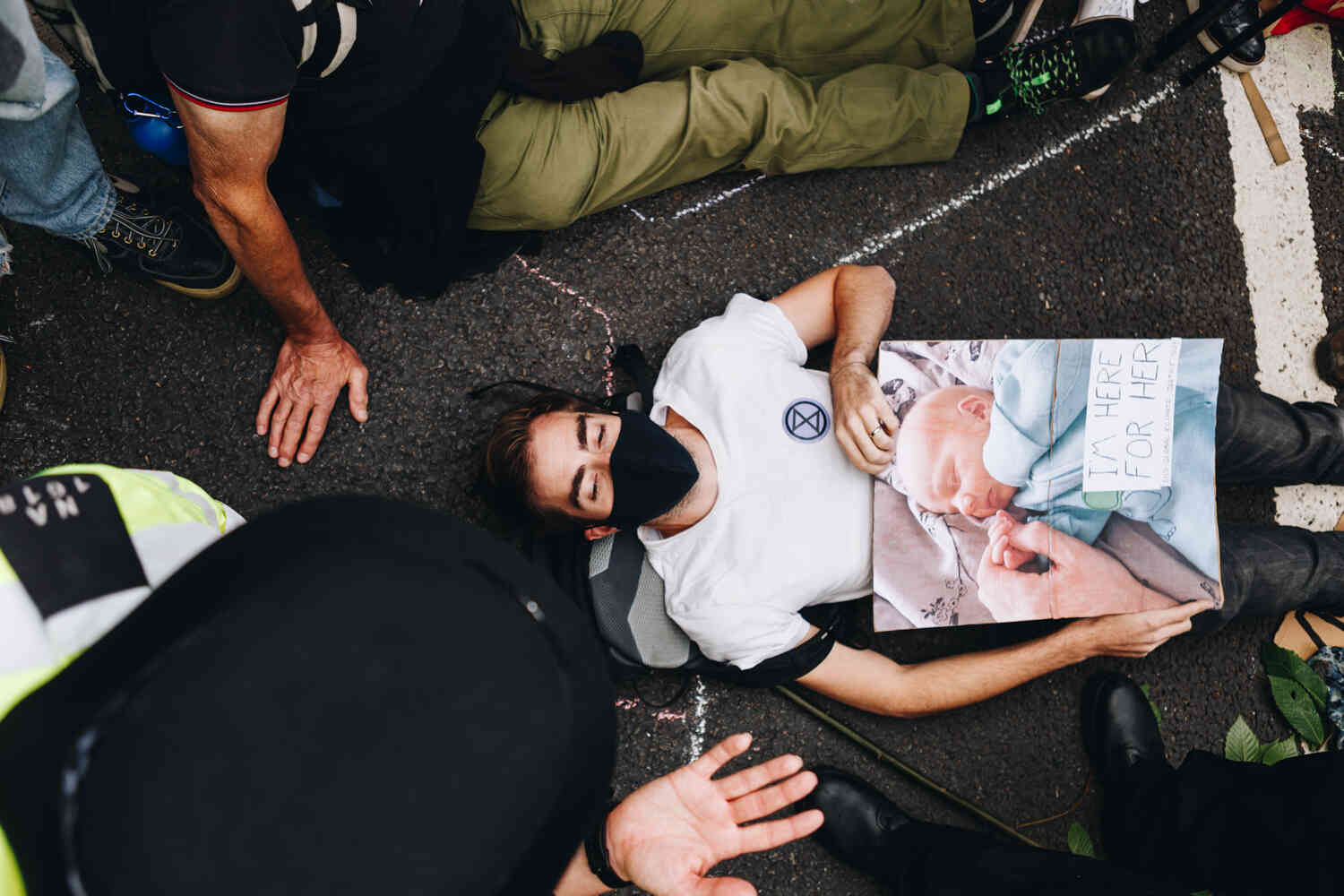 Underneath the funk and tie-dye was a bold, no-nonsense resolve that sent a clear message to the seat of government: We’re back, determined as ever, and we’re not going anywhere.

Cardiff rebels rise up (a building) 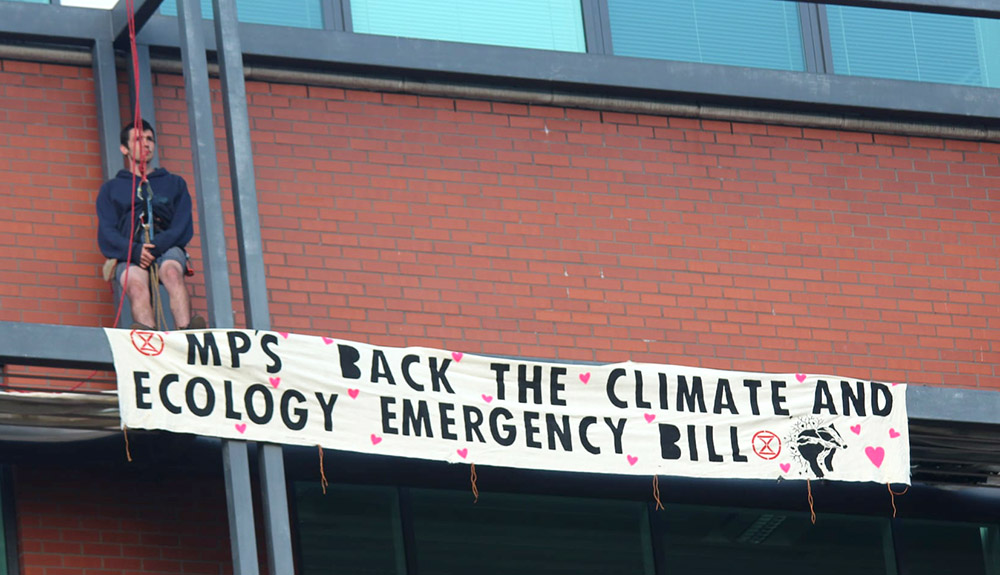 A rebel climber surveys the scene. Their other banner was so big, we couldn’t fit it in this email – check out XR Unchained to bask in its majesty!

4 intrepid climbers kicked off the Welsh Rebellion at 5am, when they scaled the Office of the Secretary of State for Wales: the building’s useful exoskeleton made it a swift job.

They hung a banner calling on the government to pass the CEE Bill, and another huge one covering 5 storeys of the building. See here for glorious drone footage of the scene!

The climbers stayed on for around 11 hours until a fire engine with an aerial platform arrived, and they agreed to come down without being arrested. 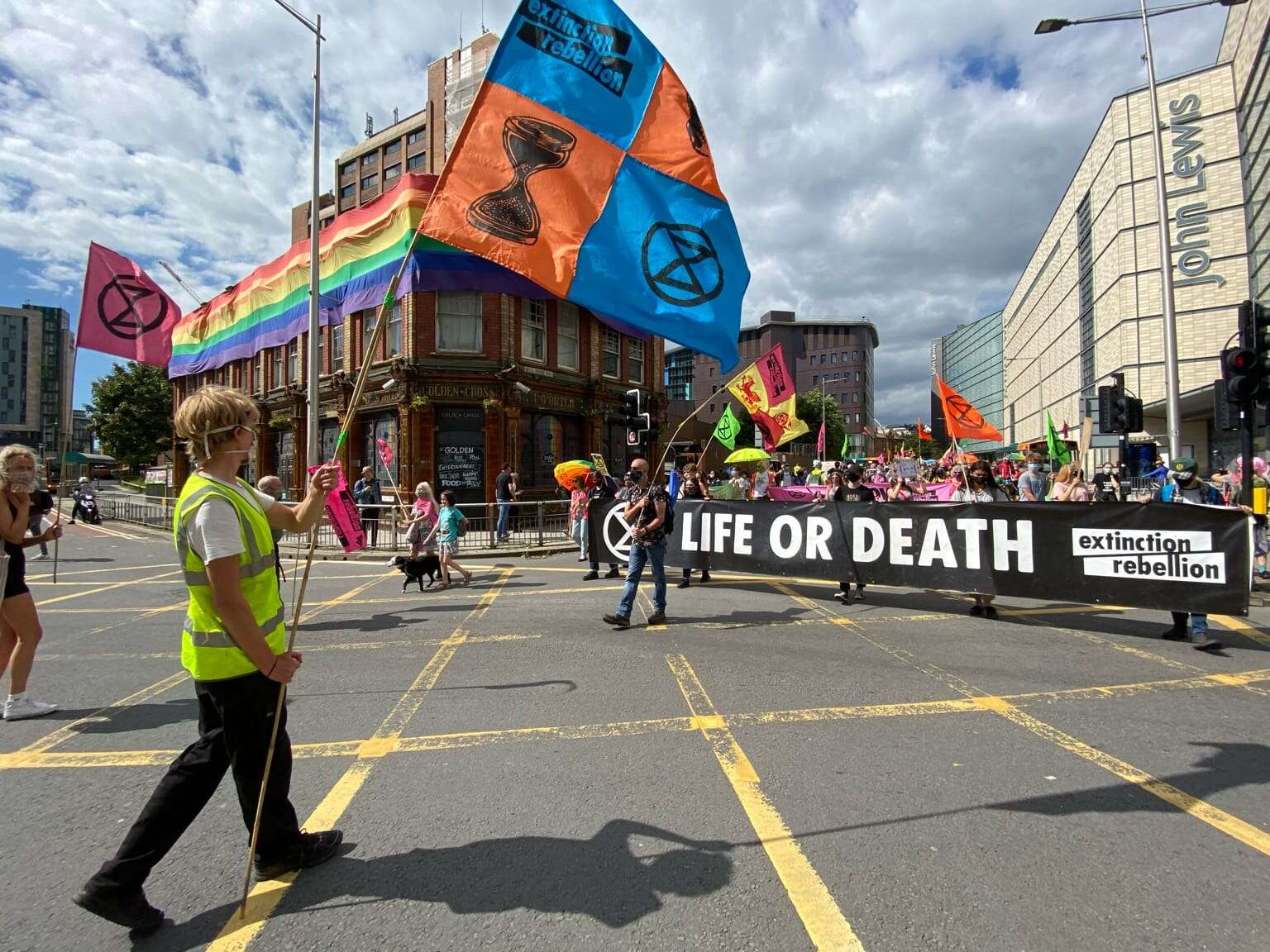 The main rebellion gathered in Bute Park where samba bands from Wales, Bristol, and the South-West noisily led hundreds of flag-waving rebels through the city. They stopped at the Senedd, the Welsh Parliament, where rebels chalked up messages calling on their MPs to support the CEE Bill, before marching on to support the climbers. 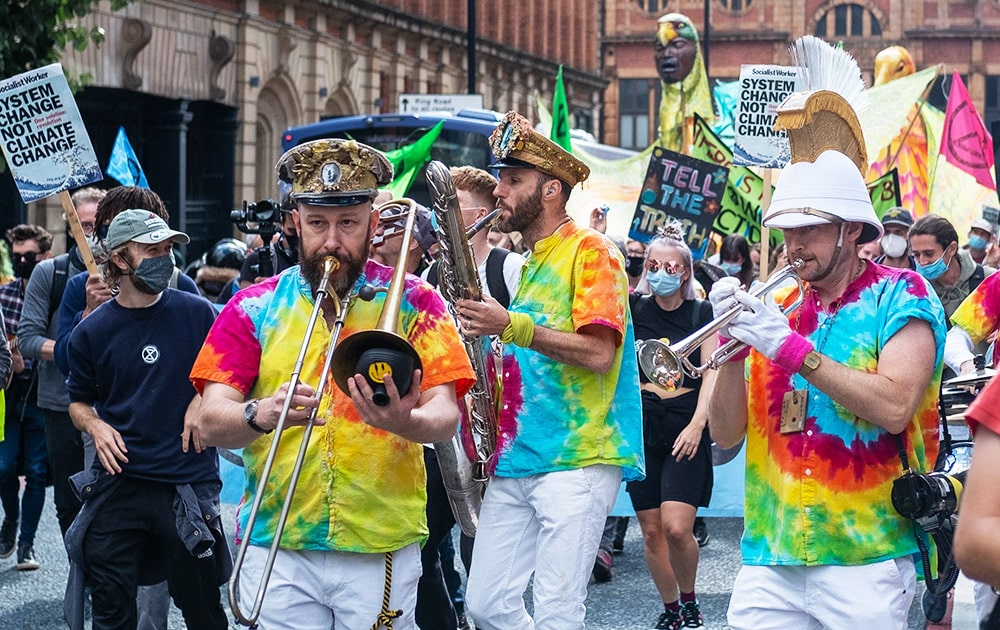 The Daily Mail’s offices also got a bright pink chalk paint makeover to highlight the suffering caused by their divisive journalism.

Speakers from XR Youth, Black Lives Matter and Trade Unions brought together the movement or movements needed to stop climate breakdown and enable a just transition.

A die-in also took place outside of the Department of Work and Pensions, with support of the Red Rebels and Emmeline’s Pankhurst’s statue, which looked on with approval. 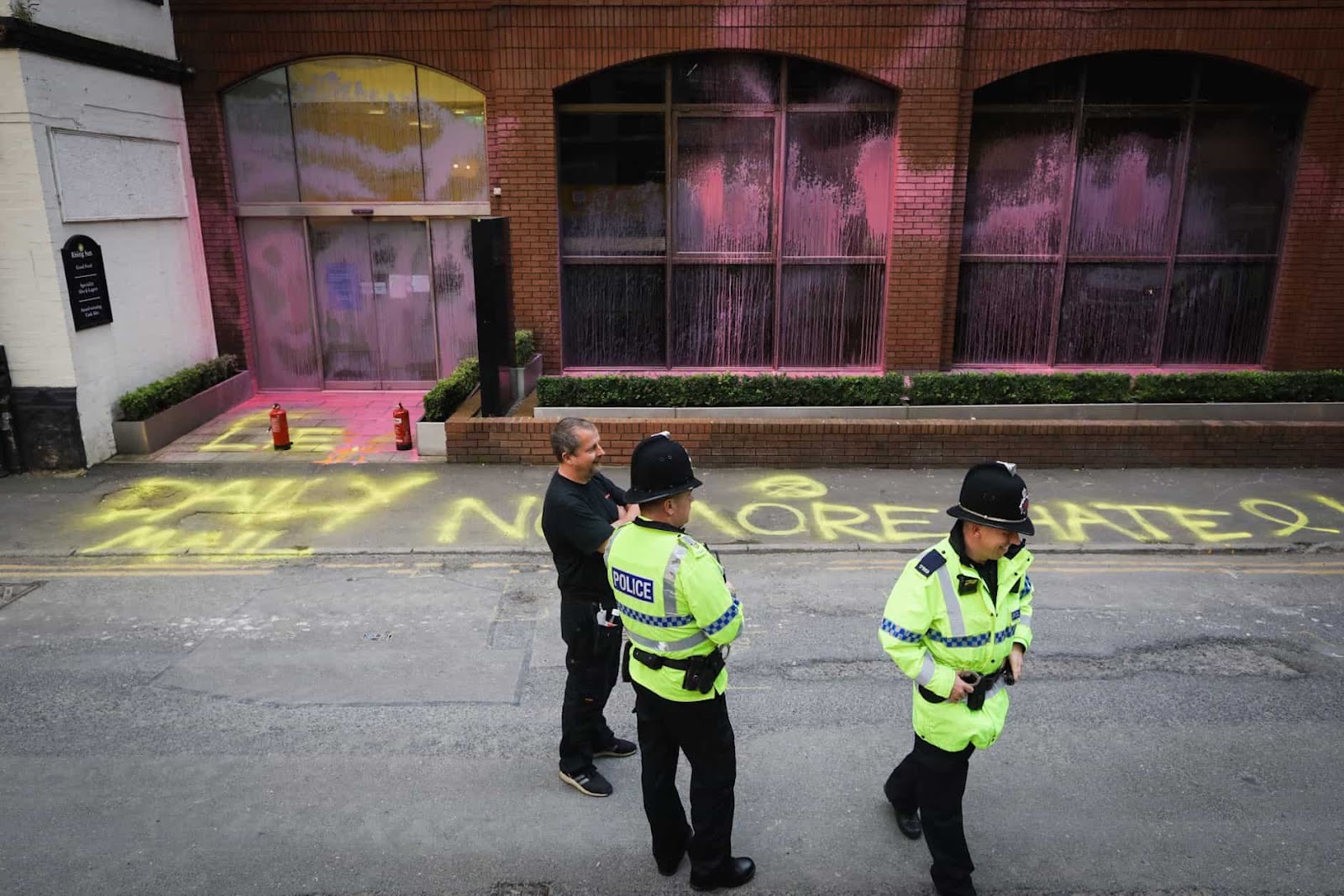 Rebels report that Mancunians were curious about the Rebellion and that fruitful outreach conversations took place. A great first day to kick off the Northern Rebellion!

Even as roads were being blocked and samba bands were playing, another quieter Rebellion was brewing: an online one.

Every day, swarms of rebels will be disrupting powers online in the Digital Rebellion, with a new focus each day. Today’s focus was the insane discrepancy between the government’s official carbon-neutral plans and its continued investment in fossil fuels.

Digital rebels weren’t messing around: they managed to get hold of personal email addresses for Dominic Cummings and Boris Johnson himself, inundating both statesmen – along with Downing Street, the Treasury and all kinds of MPs – with conscientious and well-argued messages drawing attention to the ecological emergency. 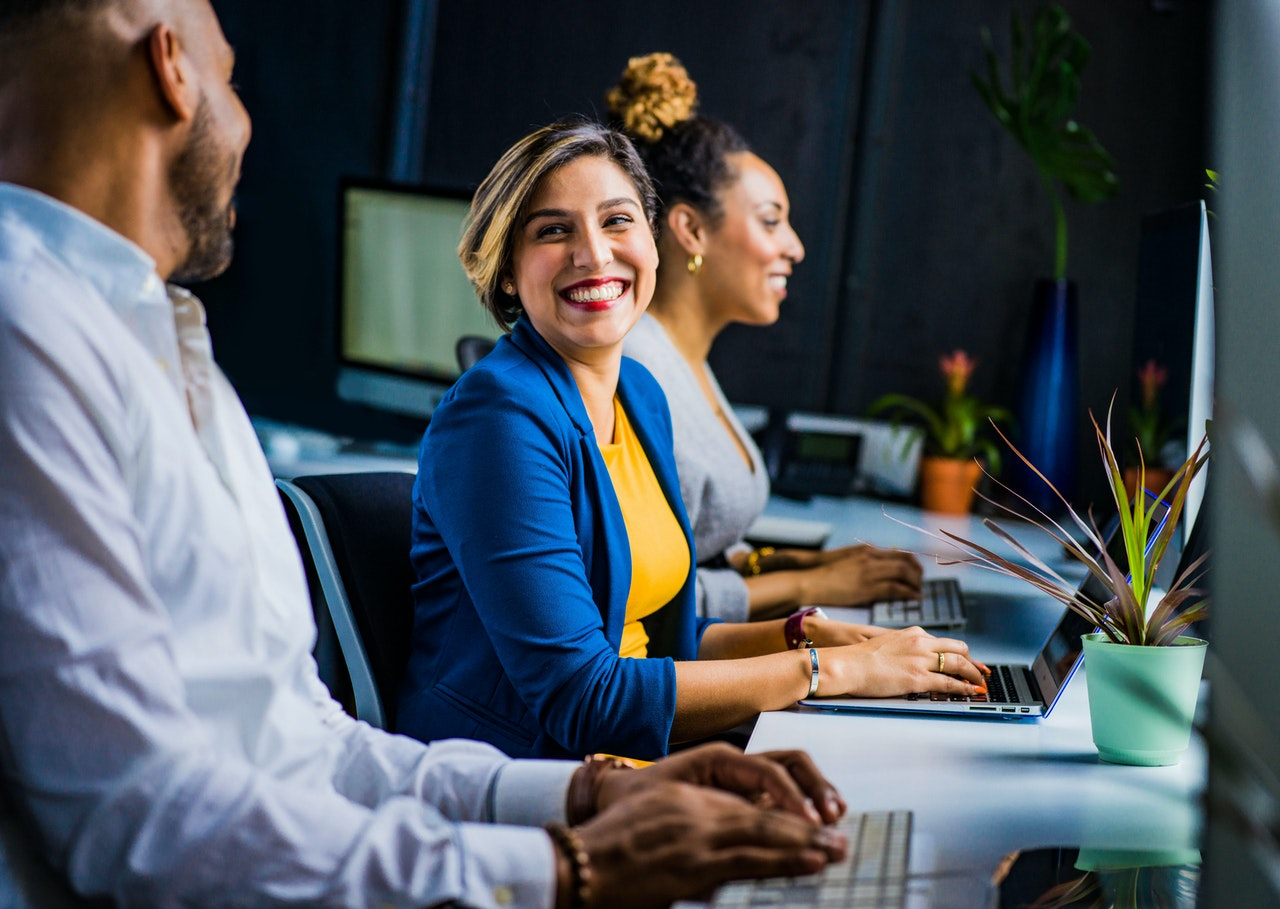 Our impression of the online actions from yesterday.

The online activity is just warming up (rumour has it that a ‘Twitterstorm’ is forecast), but in the most important ways it’s already a runaway success: the Telegram chat has become a warm and supportive community of over 500 rebels.

In the words of one member, “Joining this channel has made my day (and helped to tackle that frustration, anxieties and head goblins about not being there to sit alongside my rebel comrades!!)”. Another described the group’s effusive creativity, with rebels writing and sharing anything from elegantly-worded emails to a one-page digest of the CEE Bill.

To join a rebellious take on working from home from anywhere at all, click here. Digital rebels are welcome to a daily Zoom call, along with an open Telegram group.

It’s Rebellion time – which means there’s too much happening for one newsletter to handle! Feast your eyes on the finest photos from yet more Rebellion actions in XR Unchained. 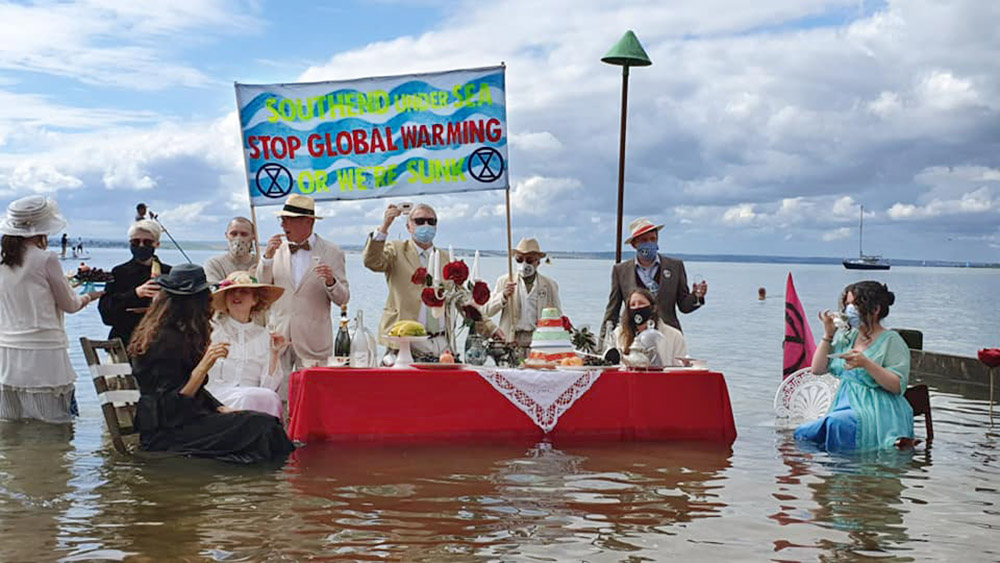 Covering some stirring shots of the Regional Rebellion, with tea parties from Gatwick to Southend-under-Sea, and more snaps from our first day of action in Manchester, Cardiff and London. 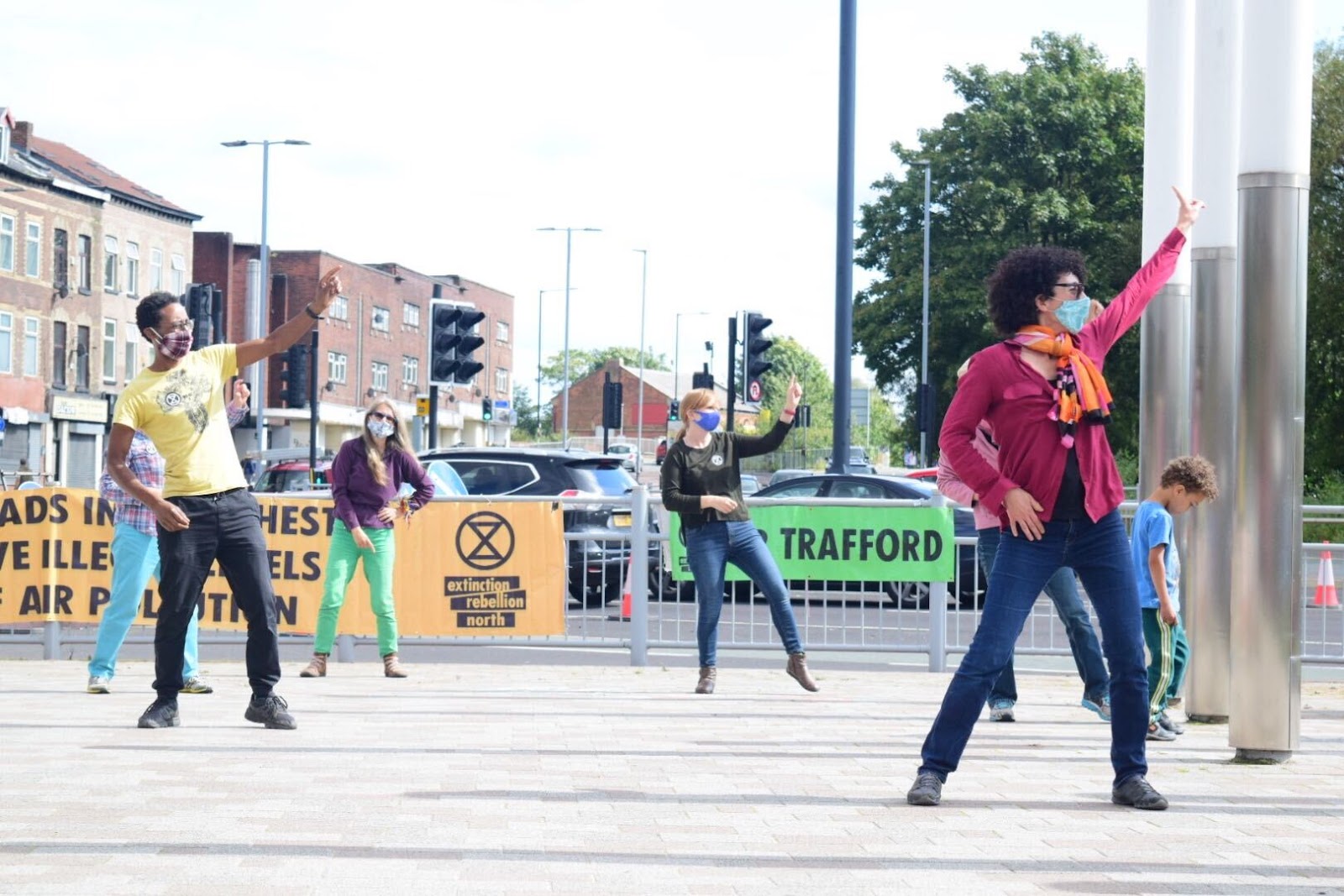 Distance Disco-bedience. Swagger and safety rolled into one. Boogie on, XR Trafford! 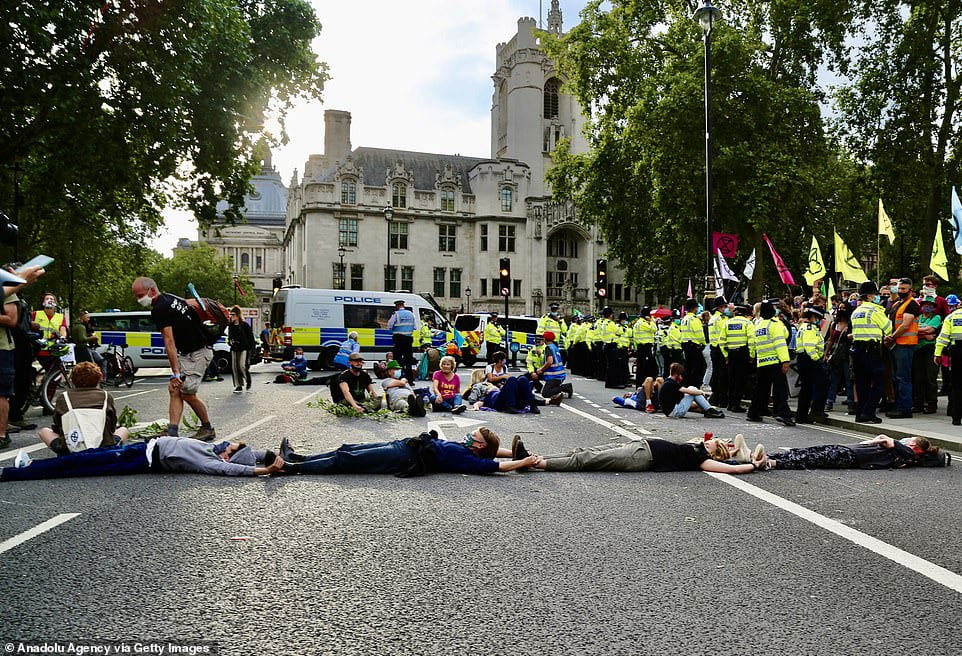 Rebels link up to hold the Square, as the evening light ushers in the end of a long day.

Including, a powerful speech by a rebel from XR Muslims at the opening ceremony of the XR Faith Bridge Vigil. 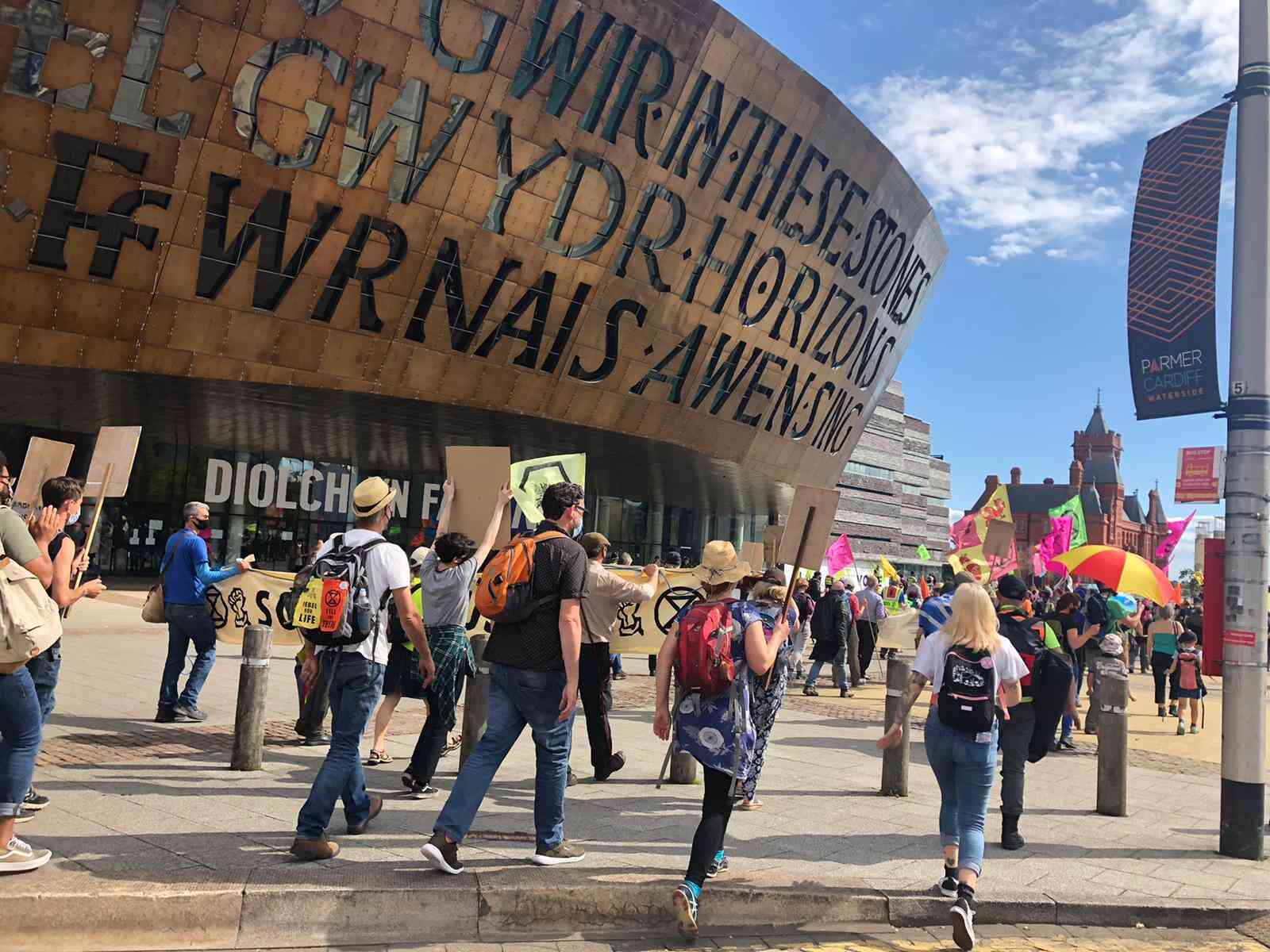 And you don’t want to miss this action from Ocean Rebellion, who took to the sea to protest the pollution caused by cruise ships and motor yachts in Weymouth Bay and around the world. 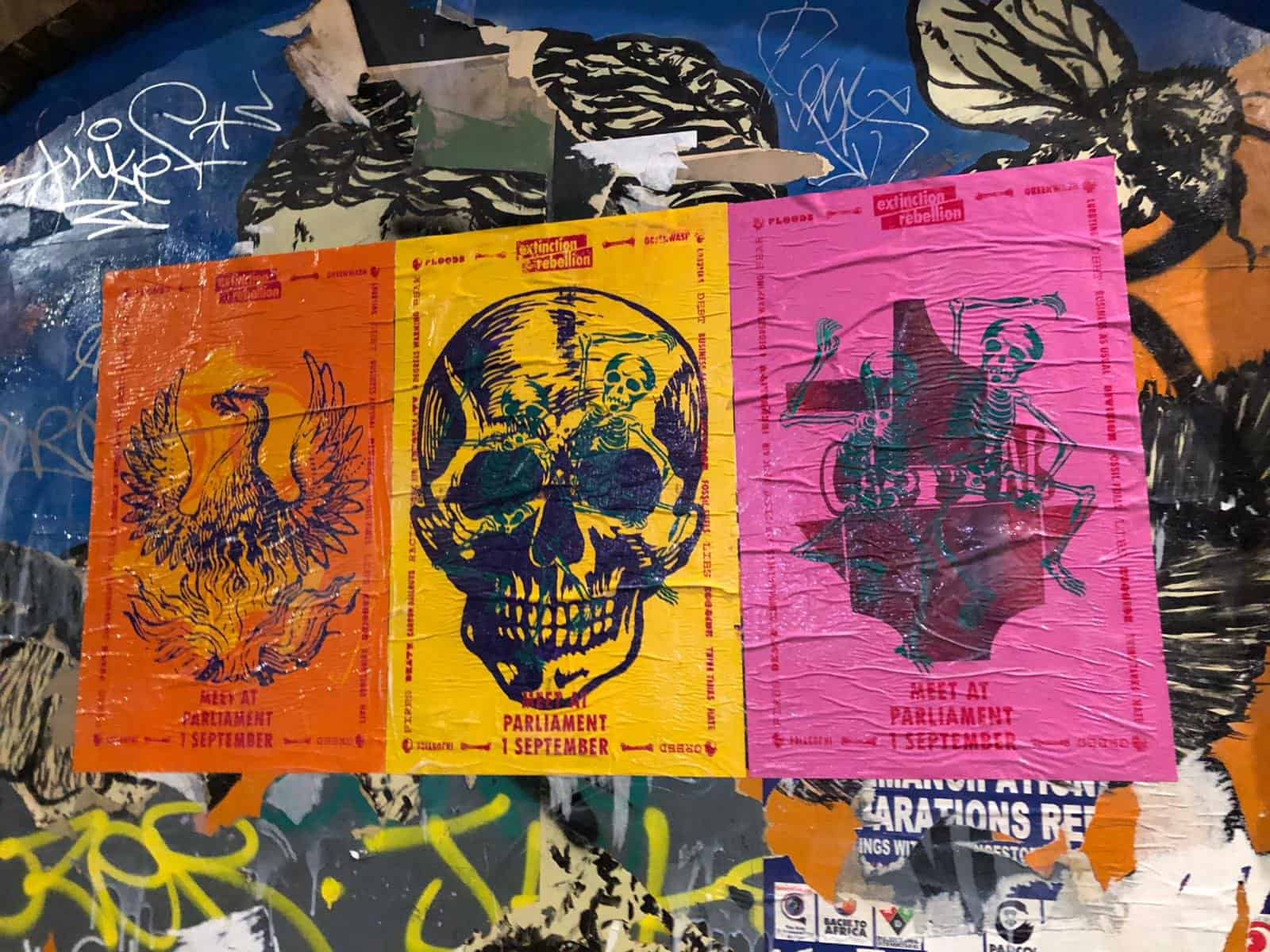 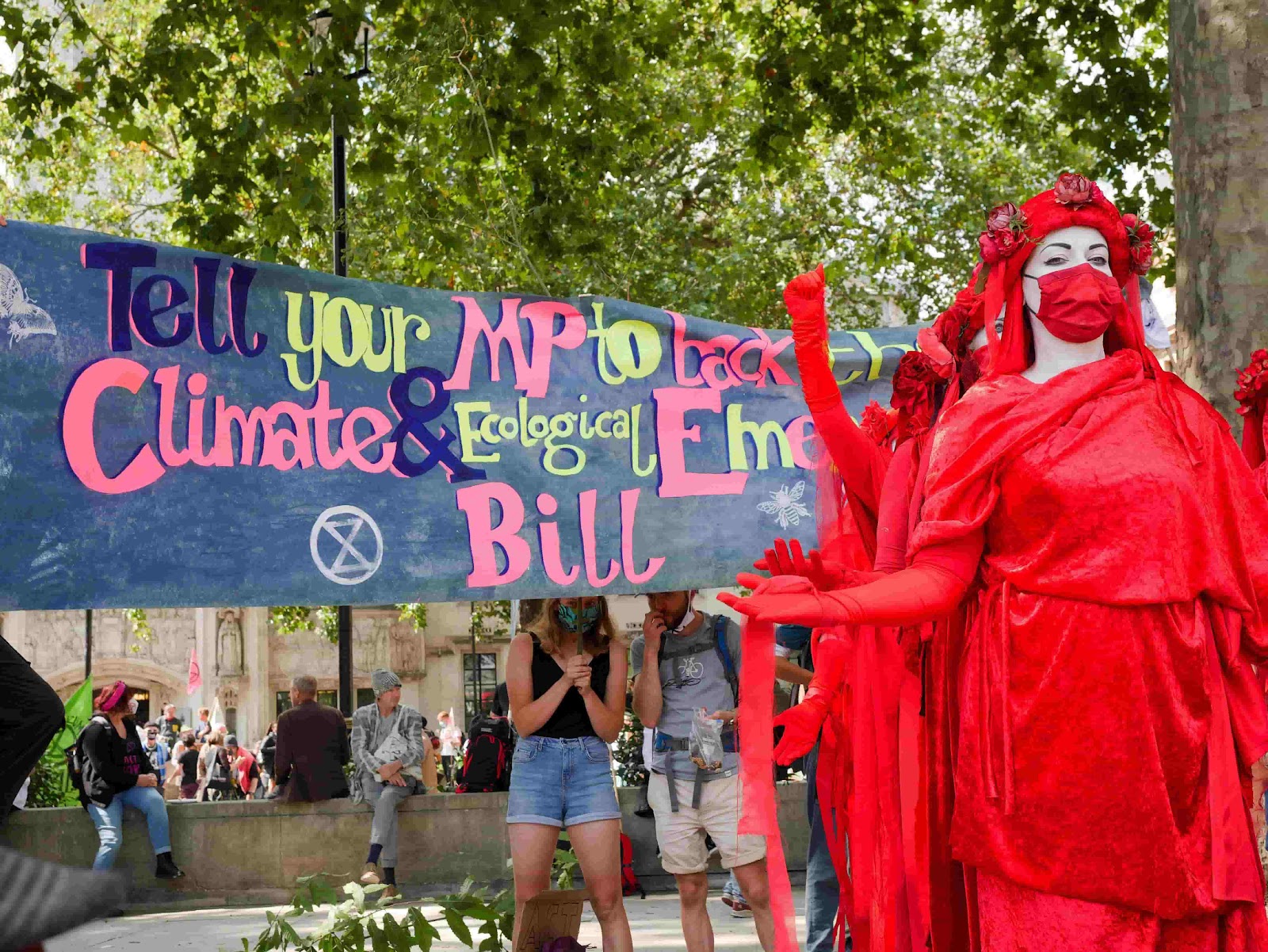 Thousands converged outside parliament yesterday to demand urgent action on the climate crisis. Today, new legislation will be tabled inside parliament that could deliver it.

Developed by a broad alliance of scientists, activists and rebels, the Climate and Ecological Emergency Bill will be introduced by Caroline Lucas MP this afternoon, and it could potentially turn our demands into UK law.

Thanks to the antiquated nature of our parliament, the introduction of the CEE Bill will simply involve reading its title. To debate its contents, MPs will have to wait for the second reading, usually 2 weeks later.

But if you think that means today’s political happenings will be trifling, you’d be flat-out wrong. This Bill is a key moment in our journey to seeing our government limit global heating to 1.5°C, conserve natural habitats, and establish a Citizens’ Assembly with real power. And people from across the House are waking up to how needed this kind of action is.

Help build the pressure, ask your MP to back the Bill. And check back here tomorrow for all the HP sauce on its formal launch! 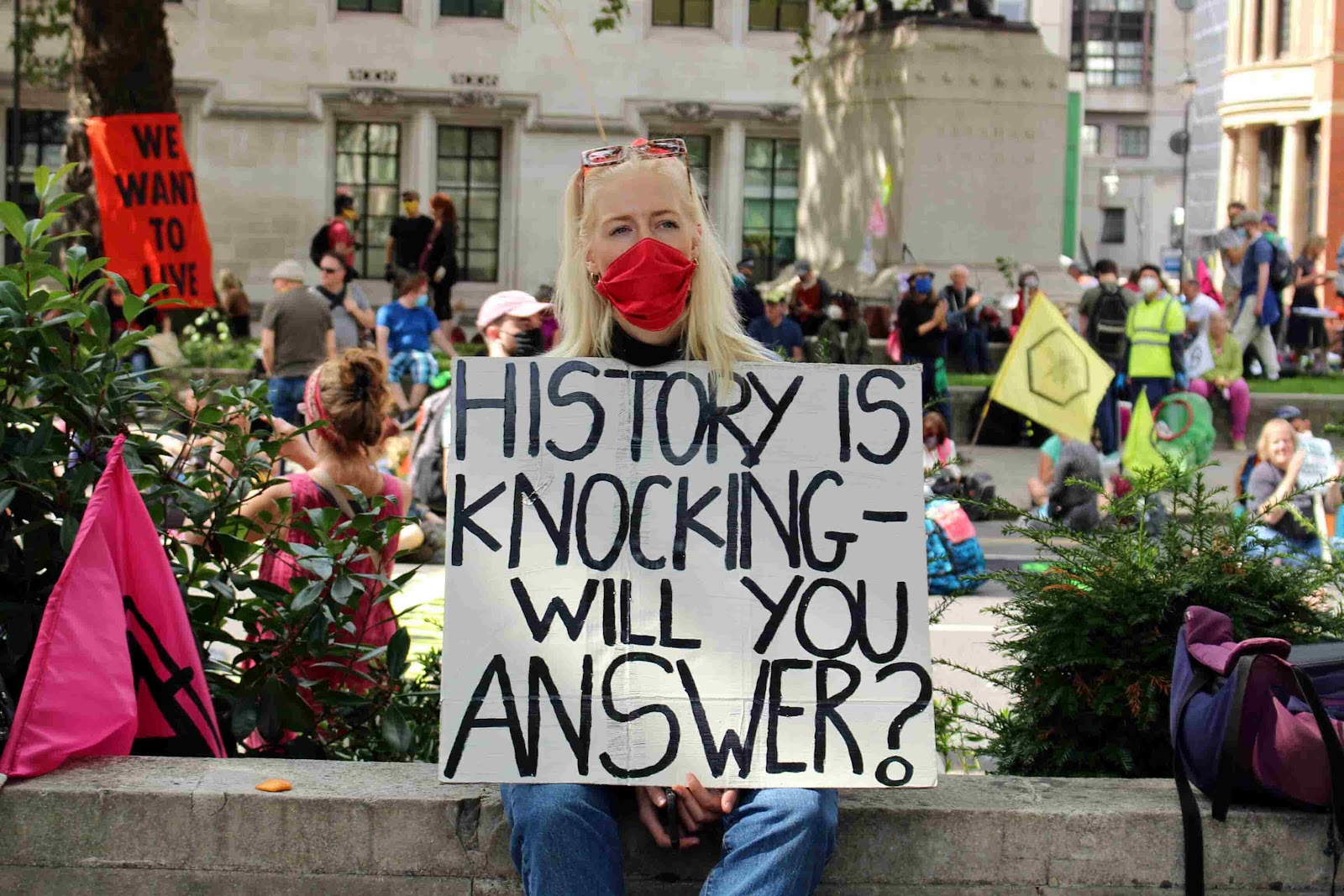 Last night, the Metropolitan Police made an attempt to ban our protests across London, a clearly unlawful move that constituted yet another attack on the right to protest, a fundamental human right in any democracy. Following a legal challenge by our lawyers, the Met has now backed down, blaming a misunderstanding.

We are currently considering whether to take further legal action.

This is the second attempt to undermine our protests and follows a written threat citing Coronavirus regulations that did not apply to our action. 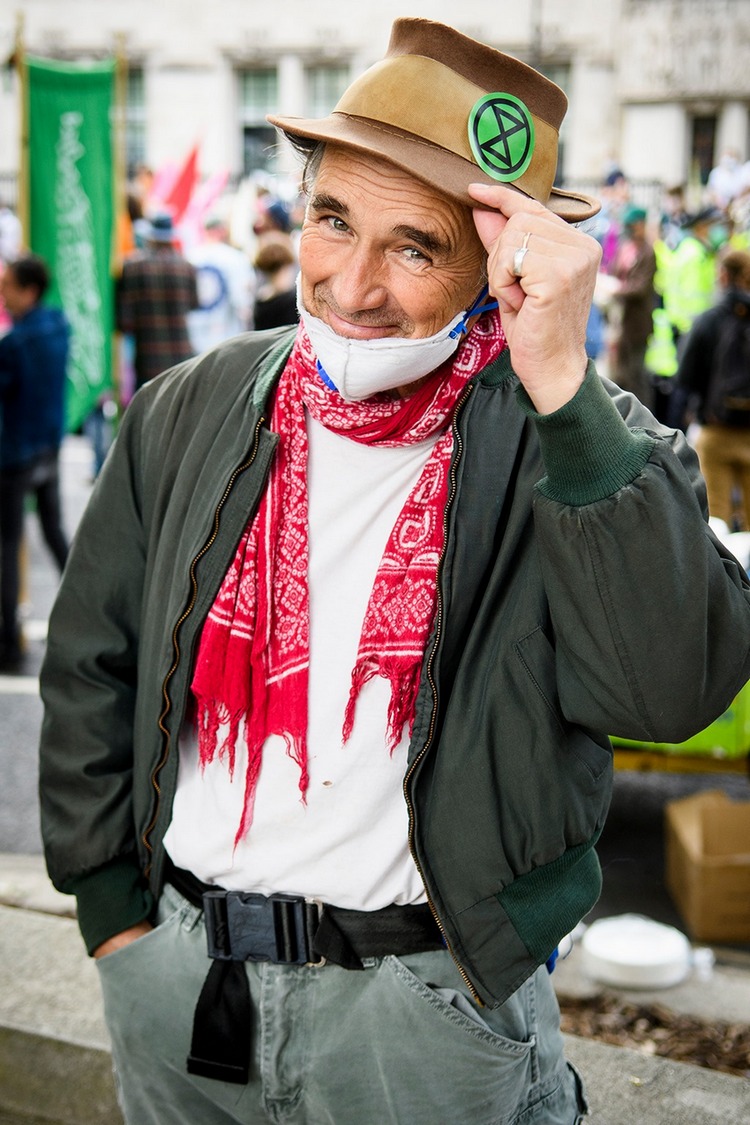 “I’m very disturbed by the situation we’re in. I don’t know what to do or where to go, so when I come out and join with other people who feel something similar I don’t feel quite so alone. It’s nice to be among people who are fucking awake!

I have great admiration for the beauty and the thoughtfulness with which XR is going about trying to awaken people to what is happening, and what is coming. I’m scared for those who don’t believe in what is coming and who are going to be hit very rapidly by a series of shocks.

As I get older, I fall more and more in love with all the facets of being alive here on Earth. I grieve for the hollowness of what we are told is a happy existence as human beings. But we’re capable of making rapid changes and we’re capable of living much more happily with a lot less, as the Covid thing has taught us, you know?” 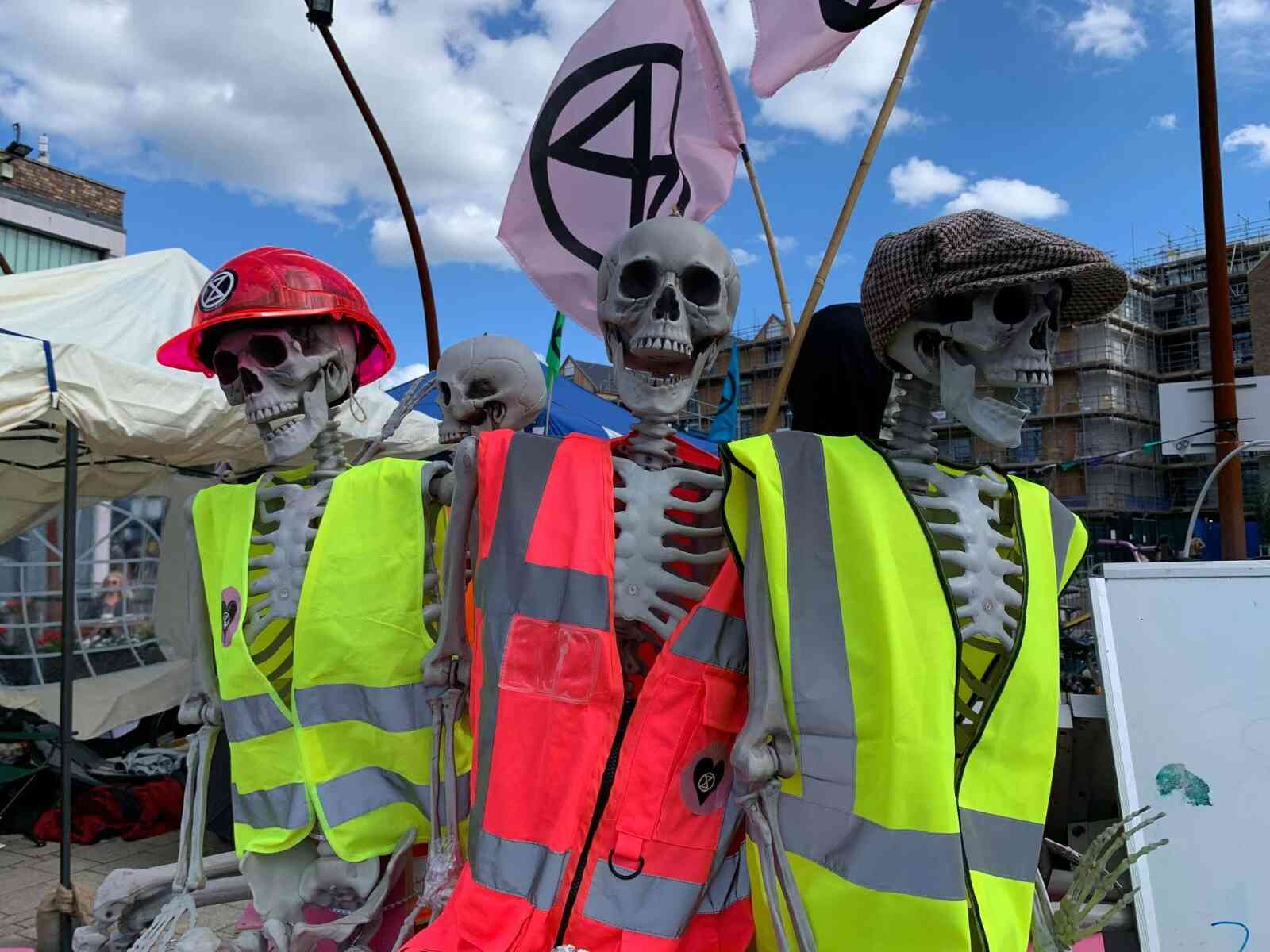 Thank you so much for reading! Even as we self-isolate, there’s so much exciting stuff going on in the movement that we barely have time to write this sign-off. Keep up the good work!

We are in a crucial phase of human history, and our Rebellion needs money to make sure our message is heard. Anything you can give is appreciated.