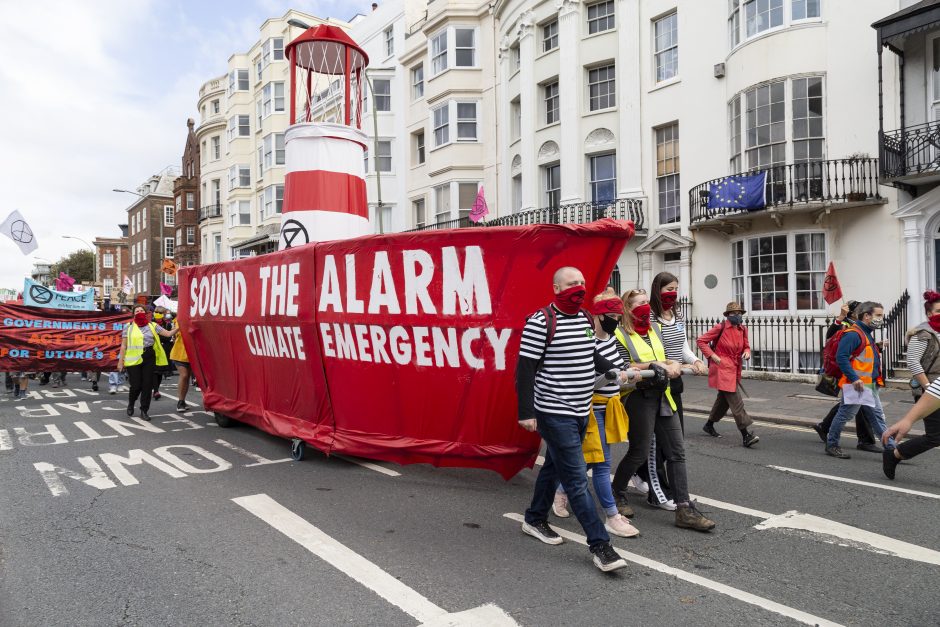 The Rebellion’s on the move: The Lightship Greta makes her way from Brighton to London

This morning, a crew from Extinction Rebellion Brighton have left Brighton with their 20ft bright red Lightship “Greta”, on an epic, week long, voyage destined for London, to join the September actions. They will be walking the entirety of the journey, with a bold and vibrant samba band in tow.

The Lightship Greta is named after climate activist, Greta Thunberg, whose bravery and passion has been an inspiration to so many around the world. Lightship Greta is the combination of a ship and a lighthouse and is handmade and hand-powered, with the words ‘Sound the alarm – Climate Emergency’ on her side. The crew will be covering about 10 miles a day, and stopping off in various locations along the way – including Henfield, Horsham, Crawley, Redhill, Sutton, Vauxhall and Hackney – so that they can engage with local people about the climate and ecological emergency, and raise awareness of the horrifying plight of climate refugees.

Claudia Fisher (58) of Extinction Rebellion Brighton said: “The United Nations estimated there are already 25 million climate refugees and this number is expected to double over the next five years. We must not standby as those in global South nations suffer from this crisis first and worst.

“The voyage of Lightship Greta aims to highlight the journey that many climate refugees are taking right now and many millions more will be forced to undertake. More of us will be displaced and have to leave our homes for each degree of heating of our earth. As the seawater rises and the fires burn, where would you go? This is a crisis that will impact us all – it is just a matter of time, and time is running out.”

It’s estimated that there will be 200 million climate refugees by 2050 – 10 times the amount of refugees that we have today. To put that in perspective, that means that by 2050, one in every 45 people in the world will be forced to become a climate refugee due to unprecedented levels of environmental degradation and global heating (cited in the IPCC).[2]

Faith Terry-Doyle, 26, of Extinction Rebellion Brighton, said: “Developing countries are the least responsible for emissions of greenhouse gases but they are being most impacted by climate breakdown, and will continue to be most negatively affected by this crisis. As people from high income countries, where the use of greenhouse gas is intensive, we have the responsibility to make a stand and put an end to this unsustainable and deeply unethical way of living. We have the responsibility to do this for our fellow humans on this earth, and for future generations to come. We ALL want to live.”

Brighton kicked things off yesterday with an action at Brighton Seafront, in collaboration with Black Lives Matter Brighton. Climate and social justice demonstrators kayaked to the burnt out West Pier in front of Brighton’s landmark i360 attraction and draped a 12-metre banner over it, reading “CLIMATE EMERGENCY – OUR HOUSE IS ON FIRE”. The protesters demanded the immediate government action to combat the climate crisis and to address racial justice.

Lightship Greta’s journey will symbolise that we can make change if we work together. Using nothing but the People Power of parents, key workers, students and many others to get there, Greta will be a voyage to raise awareness of the Climate and Ecological Emergency Bill, and all aspects of the climate crisis.