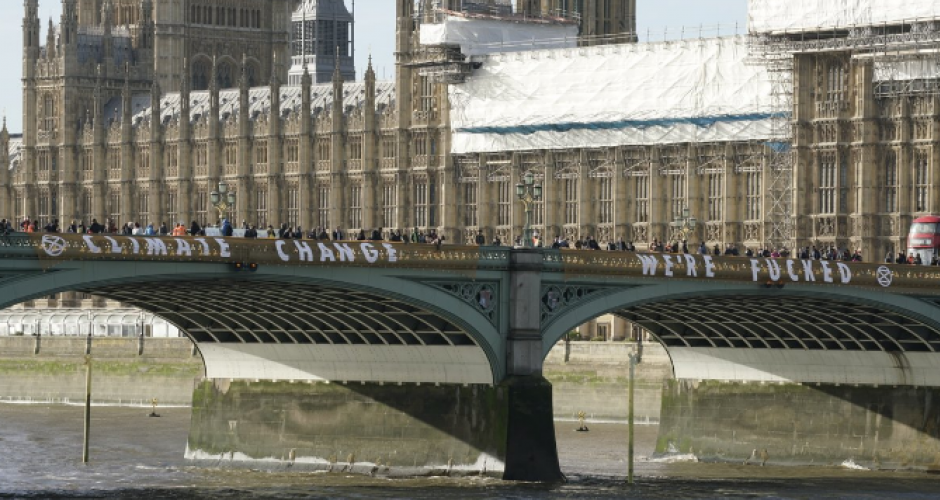 On the 24th of August five members of the Burning Pink Party (BPP), formally known as the Beyond Politics Party, including Roger Hallam, Blyth Brentnall, Diana Warner, Ferhat Ulusu and Anglican priest Steven Nunn, were arrested in their homes. They appeared in person at Highbury and Islington Magistrates court at 12 noon on Tuesday, charged with conspiracy to commit public nuisance and criminal damage, as well as breaking bail conditions. They are being held on remand until their plea hearing at the end of September. Four of the five arrested have also worked with Extinction Rebellion.

Roger Hallam, co-founder of Extinction Rebellion who currently holds no formal role in the movement, along with Blythe Brentnall, a 28 year-old-journalist, Ferhat Ulusu, Steven Nunn and retired GP Diana Warner, have gone on indefinite hunger strike.

We know these people and we’re worried about them. We know they find standing by as the world continues on a deadly path completely intolerable. We do too.

Civil disobedience is always more popular in retrospect. Most of us are pleased the suffragettes got in people’s way and look back on their hunger strikes as the brave actions of far-sighted women. We’re grateful for their sacrifice, but people passionately hated them at the time.

Starving yourself is not a flippant decision, it’s the last tool in the box. Especially considering some of these folks are new to activism.

It’s devastating that it has come to this, that people feel the desperate need to take these risks to raise the alarm about this climate emergency. We’ve known for some time now that this government will not make the necessary changes in time to avert disaster but in June this year it was confirmed by their own advisers, the Committee on Climate Change (The CCC), that they are neglecting even their own inadequate targets.

The CCC advised the government to prepare for two degrees of warming above pre-industrial levels, with a possibility of four. You cannot prepare for a four degree increase in temperature.

Between 2 and 4 degrees temperature increase there is a huge difference in impacts, but it is perverse to question whether a billion people will die, or up to 6 billion as some scientists predict. We know mass deaths will be from starvation, being burned alive in wildfires, drowned at sea or in floods and killed in conflict as global resources become scarce. Our governments are knowingly making policy decisions that will lead to these outcomes within the rest of this century, in the lifetimes of kids alive today. Equatorial regions uninhabitable, the world’s rainforests burning down becoming carbon producers not sinks. Island nations and coastal cities drowned in rising seas. This is happening and we won’t suffer first but there is no escape from the changes to our planet’s biosphere.

There are real criminals in the story of our global emergency and it is not these people who were arrested on Monday. Exxon, Shell, BP and their like have all been proven to have known for at least 50 years to be doing business in bad faith and paying billions to corporate lobbyists.

The actions of BPP have not been comfortable for many of us in Extinction Rebellion but we do understand it takes a rich landscape of campaigners and activists to cook up big social change.

We are grateful for their efforts and hope their desperation speaks loudly.

Though many members of BPP are also part of Extinction Rebellion, the two groups are separate, as we have made clear in previous statements, here and here.