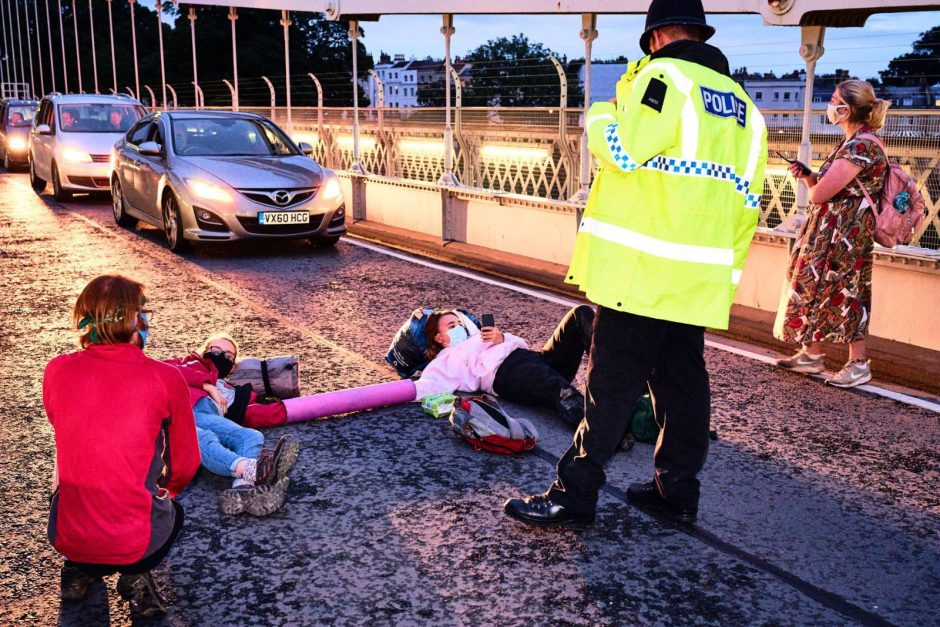 Two members of Extinction Rebellion Youth (XR Youth) – Charlie Siret, 19, who is studying at the University of Bristol and Fern, 18, who has just completed her A-Levels and did not wish to give her surname – have blocked the iconic Bristol landmark. The two young women are locked together with an ‘arm lock’ and are lying in the road on the bridge. They expect to spend the night there and will be joined by more members of XR Youth in the morning. This comes during the leadup to a two week rebellion in Cardiff, London and Manchester starting on the 1st of September. [1]

XR Youth – a direct action group of under 30s focussed on the climate and ecological crisis as well as social justice – say their occupation of the iconic bridge is out of desperation to be heard.

Poppy Silk,19, Bristol University student and member of XR Youth, said: “During the pandemic, the government has proved that they are unable to keep us safe in the face of emergency. Now is the time for adults to listen to and join the youth in demanding the government address the climate and ecological crisis in a way that also addresses deepening inequality in our society.

“We have signed petitions, striked from school for two years and still they refuse to care about our futures. As Greta Thunburg says, when it comes to action the world’s leaders are still in a state of denial.

“In blocking this iconic landmark, we are asking: ‘Will you listen to us now?’.”

Leo Israel-Governale, 19, of XR Youth, said: “In closing the bridge we are raising awareness about the greatest existential threat [2] to humankind by targeting the most iconic landmark in Bristol – recognised around the UK and internationally. British media have a vested interest in distracting the population from the crisis for the sake of preserving their own wealth.  At a time when a third of Bangladesh is flooded, the climate crisis isn’t coming, the climate crisis is here.

“Extinction Rebellion Youth are taking action today to call Bristol to attention, and ask that the government show the same revolutionary ingenuity shown in the bridge’s construction, and build a Britain capable of tackling and reversing the ongoing crisis.”

0900 Leafleting, speaking to the public

1000 Chalking / creating art on the bridge

1200 Trainings on the bridge

All actions will be Covid-safe: The group says that they are taking into account the risks due to Covid-19, and have decided to encourage the use of masks and ensure the protest can spread to the park if needed.