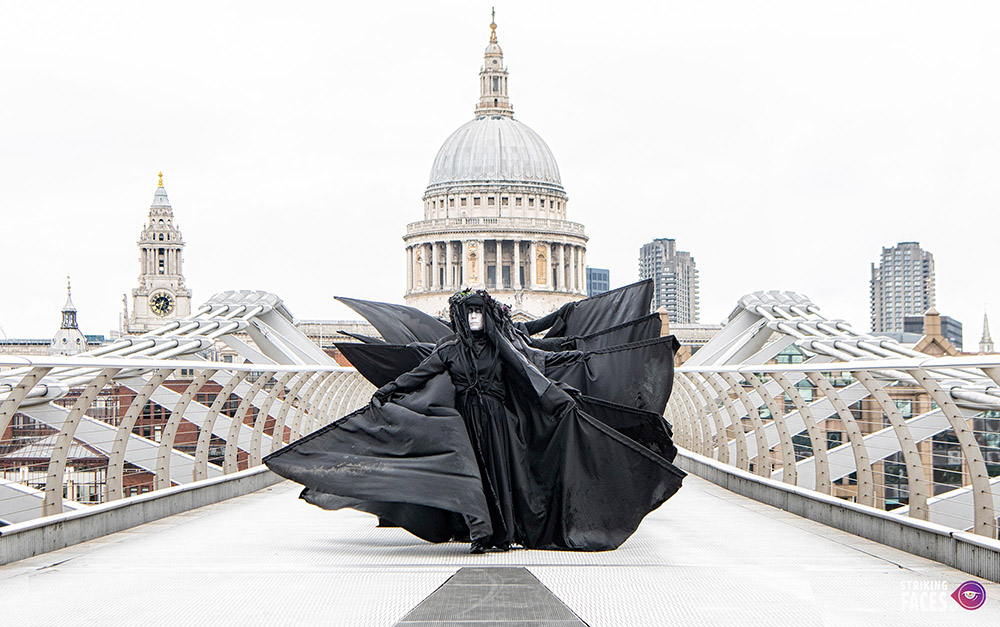 The Rebellion is just 3 weeks away!

Plans are being hatched as we write. Here’s the lowdown for now.

Local groups will kick off the Rebellion with action all over the UK in a civilly disobedient long weekend from 28-31 August. Join your local group now and start planning your action!

Rebels who can’t make it onto the streets this time, fear not! We need you to join the Digital Rebellion: together, we can build pressure on specific targets online and via telephone. We’ll be sharing details for this soon (along with plenty else!) on the UK Rebellion Broadcast. (Be sure to join your local Rebellion broadcast group, too: Manchester, Cardiff, London).

Get pumped with this video.

Find poster design templates here to Paint the Streets and let your town know the Rebellion is coming (there are options for funding printing costs – see here).

Check out this brand new handbook on how you can prepare to rebel, including useful trainings, checklists and at-home actions.

Want to help but not sure how? Take this quiz, then sign up for Rebellion roles here! 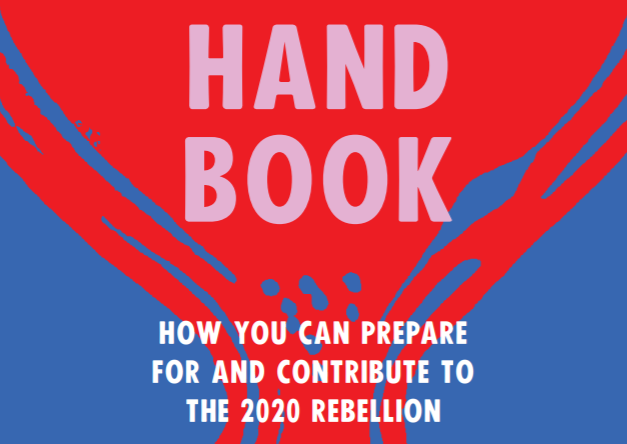 We’ve had a long and crazy year, but it’s time to remind our government that it cannot – must not – lose sight of the future. Whether the virus spreads or shrinks, without action our world will continue to burn. We need to keep confronting a self-destructive system that is spiraling out of control.

To stay up to date with Rebellion news, plans and resources:

This issue is jam-packed with tidings of rebellious joy and excitement for the weeks ahead. Highlights include rebels helping to block an arms factory near Derby, the eye-catching Oil Slicks at the Bank of England, and the Reparations Rebellion in Brixton. Oh, and some umbrellas with a point to make.

Read on to find out about the upcoming Rebellion and lots more opportunities to train and prepare ourselves for the action ahead, including an online Empathy Cafe, an online action in solidarity with Indigenous peoples in Brazil, and a brand new podcast! 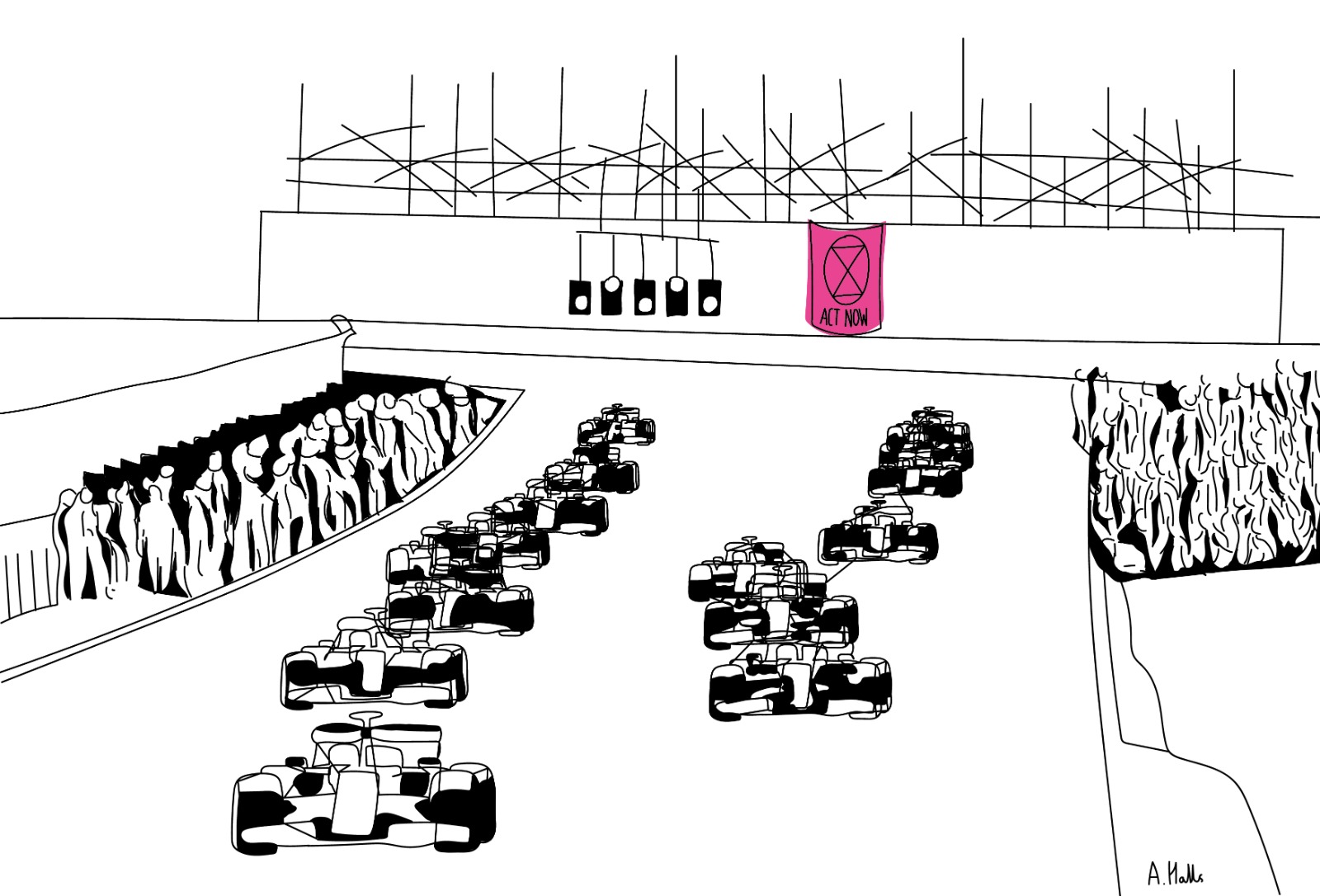 4 rebels were arrested after successfully completing a big banner drop at the start of the Grand Prix in Silverstone. Credit: @amsillustrator.

This Rebellion needs your support. Anything you can give is appreciated:

Rebels were busy at the Bank of England in July, with 3 linked actions against carbon-intensive Covid ‘recovery’ bailouts. 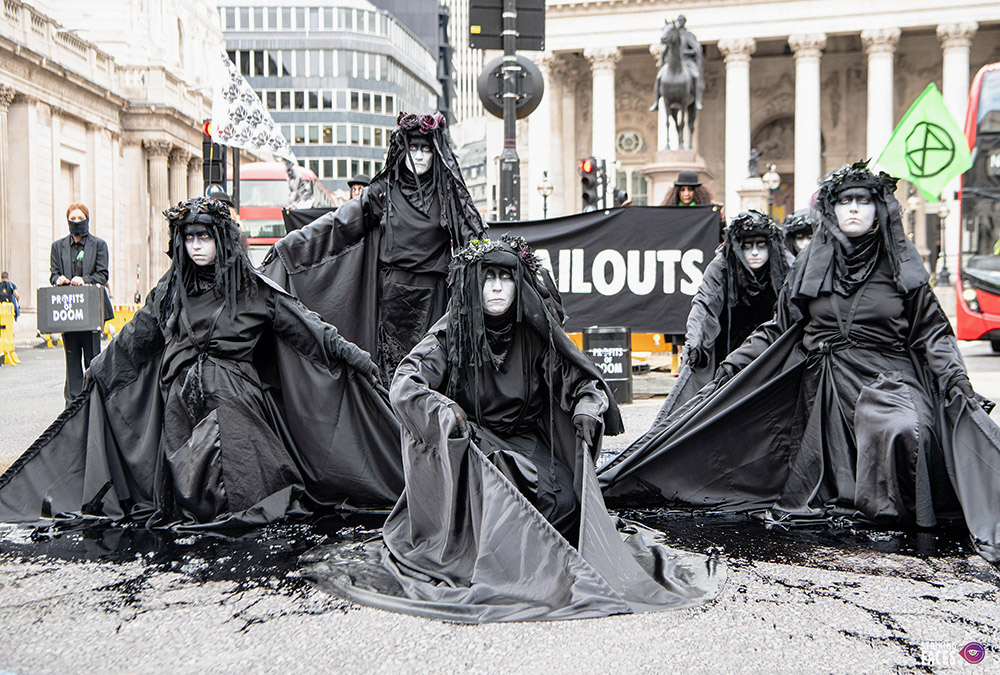 From temperatures hitting nearly 40℃ in the Arctic to nearly 3 billion animals harmed in the wildfires in Australia earlier this year, the urgent need to build a more resilient world post-Covid could not be more clear. But the Government and the Bank of England are continuing to prop up polluters instead of prioritising a green recovery.

On July 10, a dramatic series of actions involved pouring fake (plant based, biodegradable) oil over roads with the slogan No Dirty Bailouts emblazoned on banners. 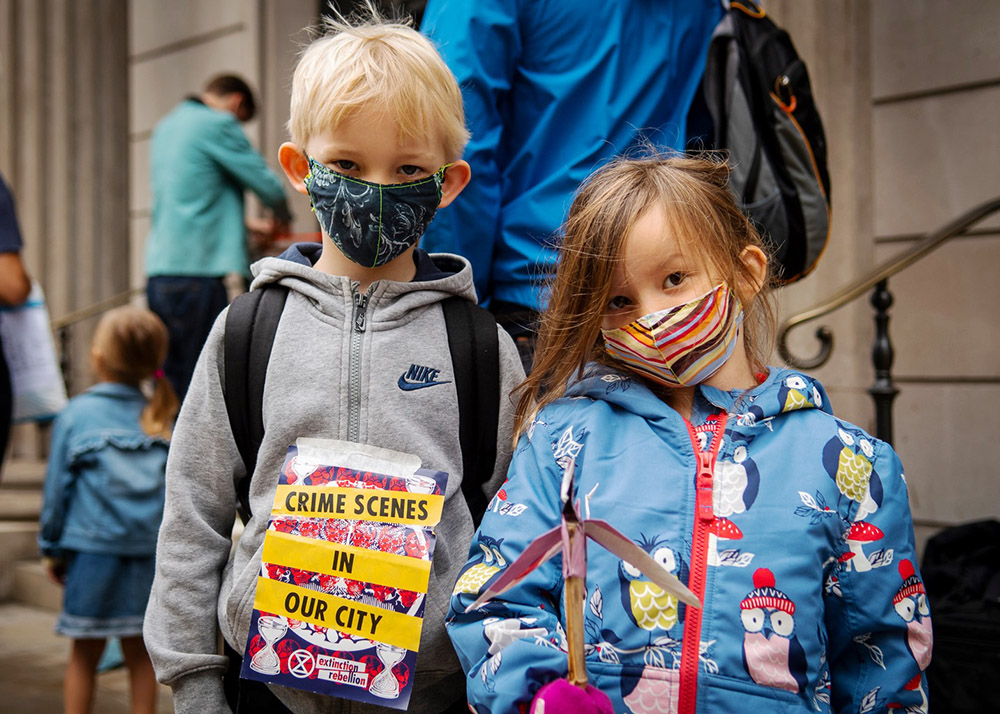 A further action on 27 July centred around a simple message: “Build Back Better: Another World is Possible.” Drawing inspiration from a Japanese tradition, in which the origami crane represents hope, the children of XR Families made 1000 paper cranes with wishes for their future.

The cranes decorated pillars of the bank with voices of mothers from all over the country singing hopeful words to their babies filling the air. 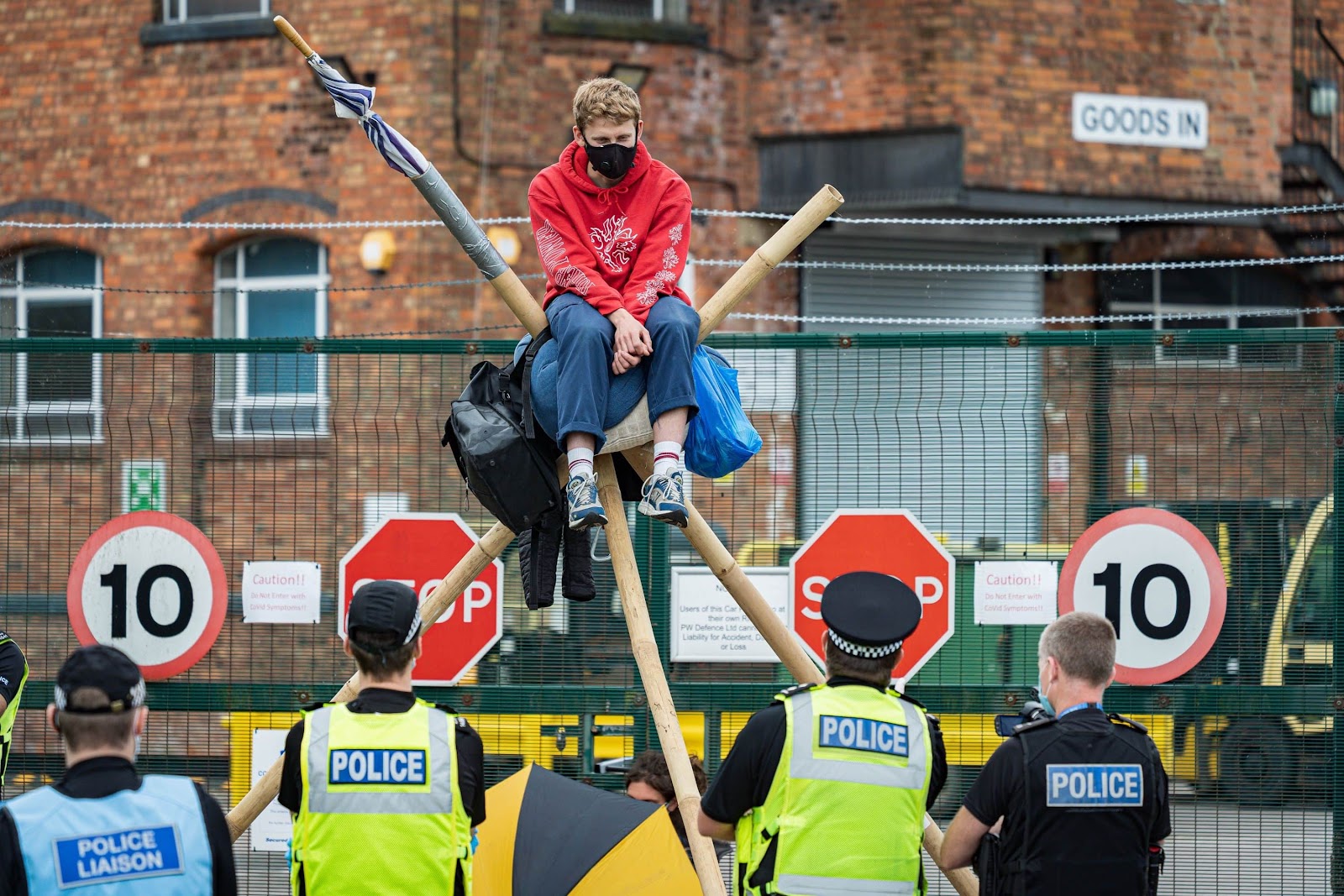 Too high up to be legally pulled down, the protestor atop the tripod requires a specialist police unit. Photo: Vladimir Morozov/akxmedia

Rebels joined forces with two allied groups to block access to an arms factory at Draycott, near Derby, and a government ministry in London.

A small team from XR, Women of Colour-Global Women’s Strike, and Global Justice Rebellion used umbrellas, bike locks, and a large bamboo tripod to close the factory for an entire day. The factory produces crowd-control weapons, including ones recently used against peaceful protestors in the US and Hong Kong.

Police arrested 3 team members, charged them with aggravated trespass, and released them in the early hours. 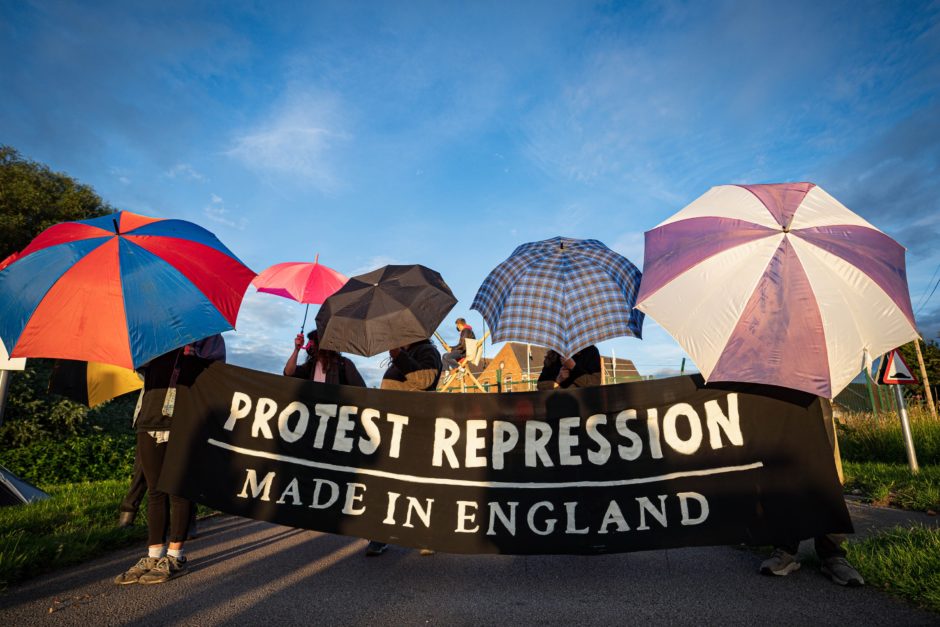 Meanwhile, another team in London used umbrellas to block the entrance to the Department for International Trade (which grants arms export licences) and made speeches calling for the UK to stop profiting from violence and repression abroad.

The use of umbrellas honors pro-democracy protestors in Hong Kong, who used umbrellas to shield against tear gas. XR Hong Kong has since sent messages of solidarity to the UK teams involved. 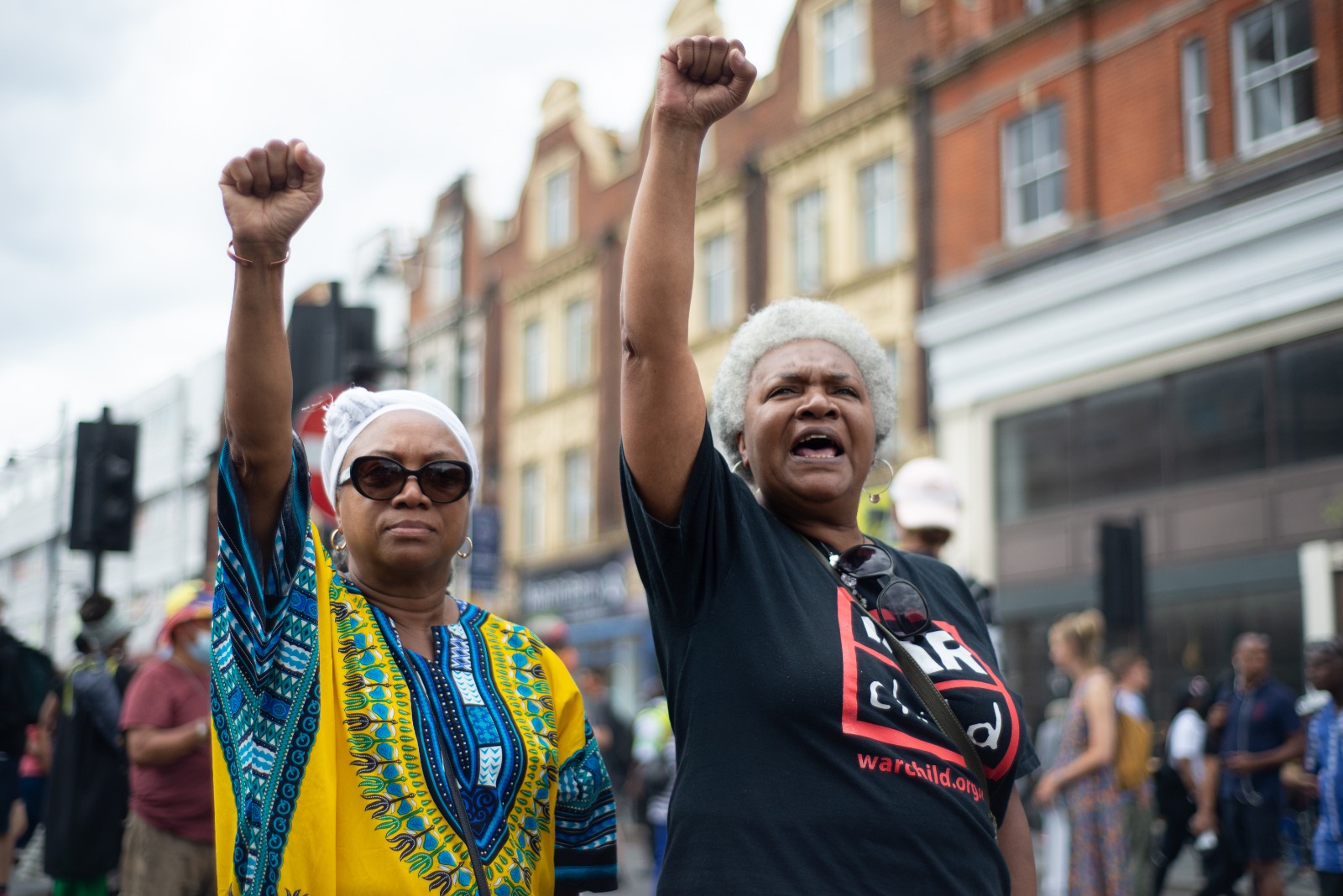 “We are the mothers and fathers of humanity and our repair will bring about the repair of the planet,” XRISN and Stop the Maangamizi spokesperson Esther Stanford-Xosei told the crowd. “The taking of us from our homeland was the beginning of our ecological crisis.”

Maangamizi, a term popularised here by the rapper Akala, derives from the Kiswahili verb -angamizi, meaning ‘to utterly destroy’. The enslavement of Africans shaped the trade routes that devastated entire cultures and ecosystems.

Under the 1837 Slave Compensation Act, the government borrowed £20m (over £2 billion in today’s terms) to pay off the families of slave-owners – rather than to the cultures despoiled. This borrowing was only paid off in 2015 by British taxpayers.

Rebellion in the Regions 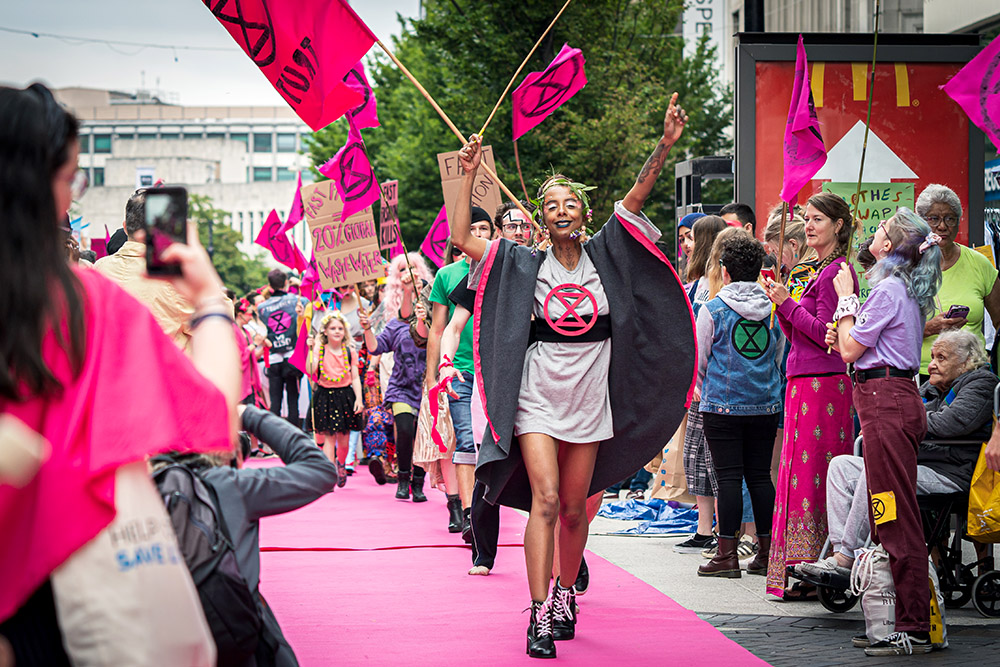 The September Rebellion will kick off with regional action on the 28-31 August bank holiday weekend. Local and regional groups across the UK are encouraged to hold their own local Rebellion with actions on these common themes:

Everyone is invited to get creative – start planning your own actions and events for these days. You can use this Action Guide to help plan your action.

The coronavirus pandemic isn’t over; we need to rebel safely. Find advice and guidance here on designing actions in the time of corona. We will be constantly reviewing and updating our plans and this guidance as the situation changes. 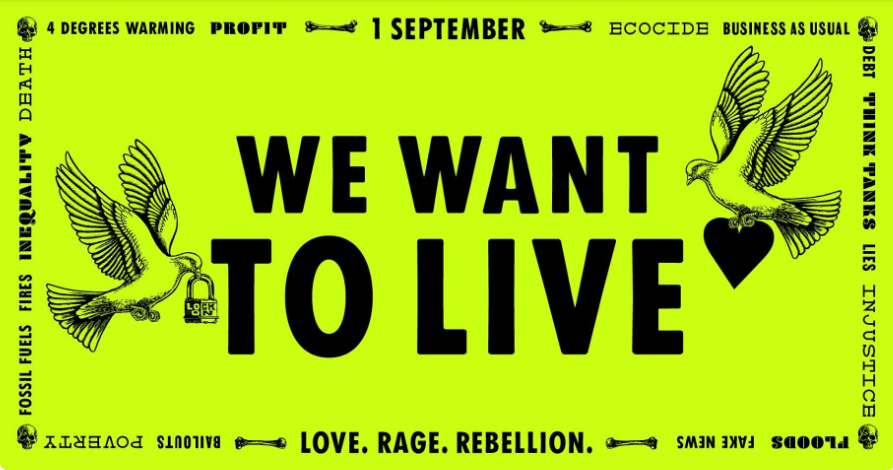 From 1 September, we’ll come together to rebel in London, Cardiff and Manchester.

We’ll keep the action going for as long as feels appropriate, so take two weeks off, if you can.

A lot has changed in the world since our last Rebellion, but the need to rebel has not gone away. The situation is as urgent as ever.

Invite all your friends and please donate to the crowdfunder if you can and share it! 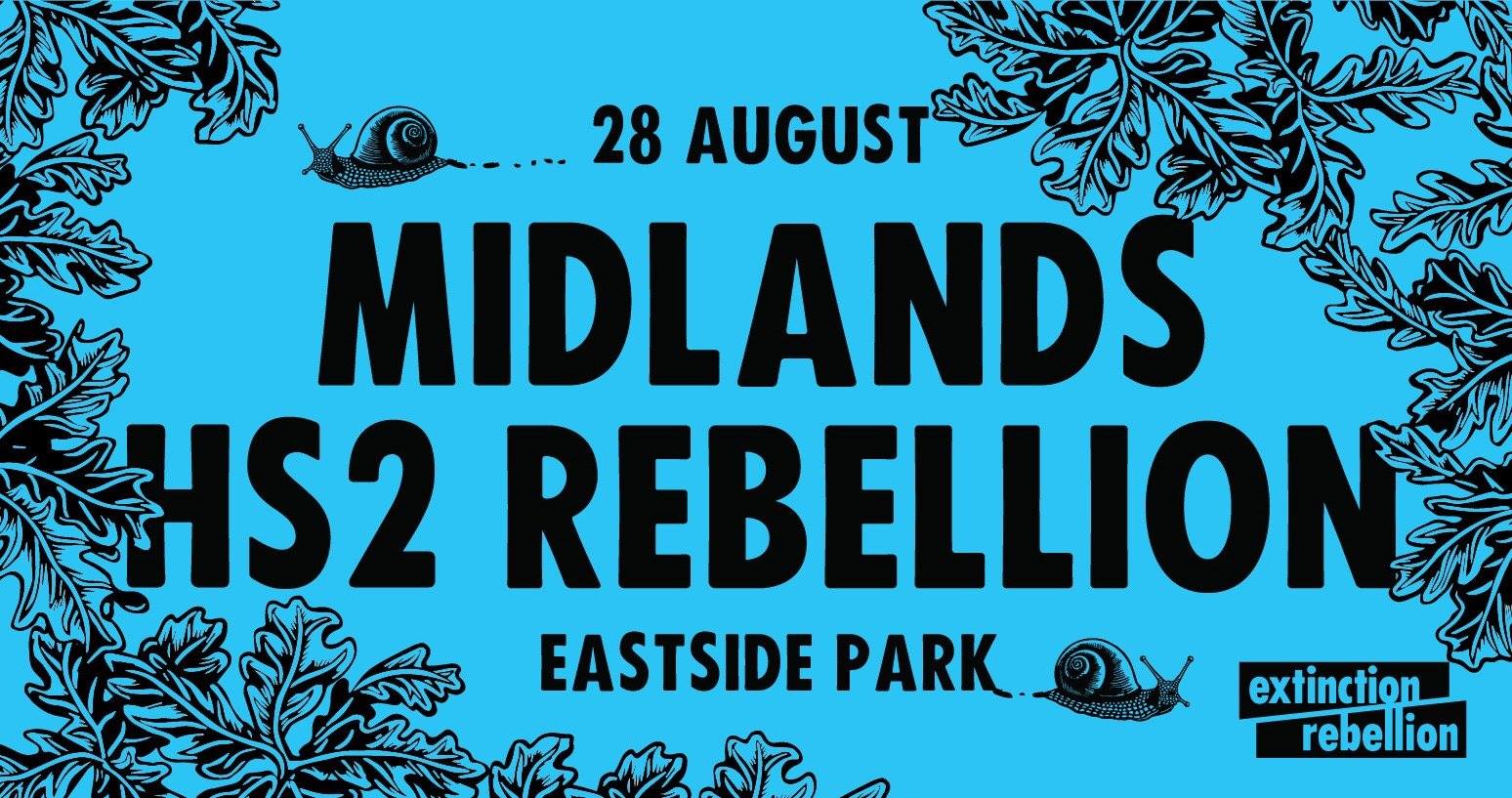 In September, the deforestation of the beautiful UK countryside is set to speed up to make way for the HS2 train line. In response, there will be a series of mass actions targeting HS2 and coinciding with the September Rebellion.

Support our protection camps along the line between Euston and Birmingham throughout August to connect, upskill and learn more about why HS2 has to stop! Beginning 28 August – join rebels from across the Midlands in Birmingham. 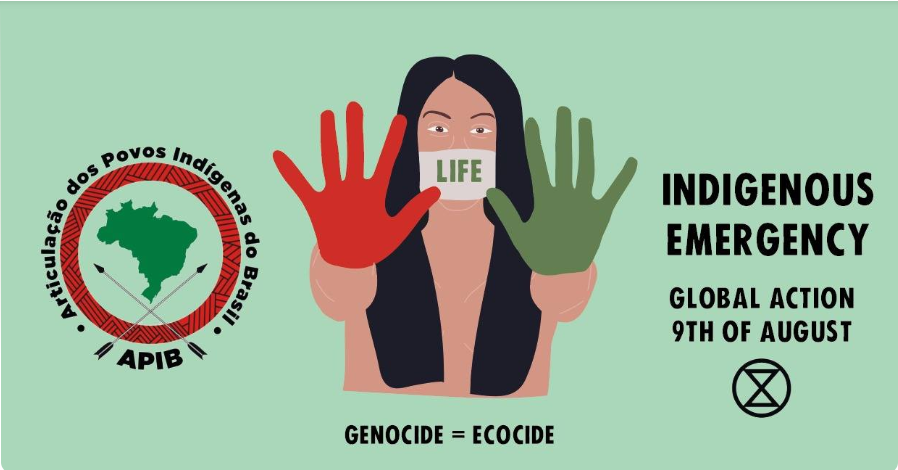 Join an urgent call to global action by Indigenous leaders from Brazil on Sunday 9 August. A day of rebellion to sound the alarm on the impact of Covid in indigenous communities.

“It’s not just a number. Each indigenous body holds an ancestral enchantment. For each indigenous person who dies, part of our collective history dies too.” Celia Xakriaba.

To show your solidarity, paint your hands: one red and one green to symbolise genocide and ecocide respectively and post a selfie on social media along with the crowdfunder for APIB who are supporting indigenous communities to access food and medical supplies. Or organise an action with your local or affinity group.

Find out more here and support or share the crowdfunder.

Join us for a cuppa and explore XR’s Ps and Vs! 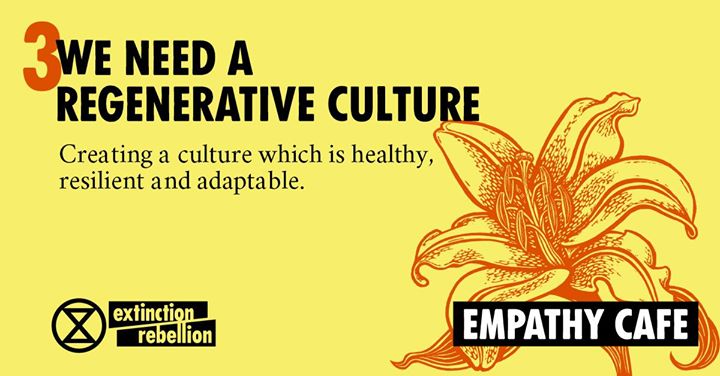 Join fellow rebels on Saturdays 8-10.30am to explore our 10 Principles & Values. As we prepare for Rebellion, this is a great opportunity to practice mutual active listening and experience XR’s regenerative culture. Upcoming sessions focus on: 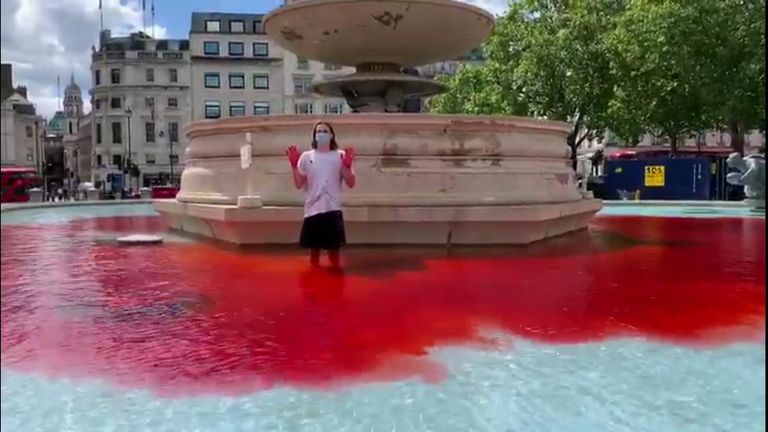 2 rebels were arrested when Animal Rebellion turned the fountains in Trafalgar Square bright red and painted their hands, symbolising how the Government has blood on their hands. Future pandemics can be prevented if we transition to plant-based food systems.

Find out more here, and sign up to their newsletter to receive all the latest from Animal Rebellion.

Do you bank with Barclays?

XR Money Circle is planning actions to tackle Europe’s biggest fossil fuel funder: Barclays! And would love to know how many rebels are customers. Email xrmoneycircle@protonmail.com if you bank with Barclays. 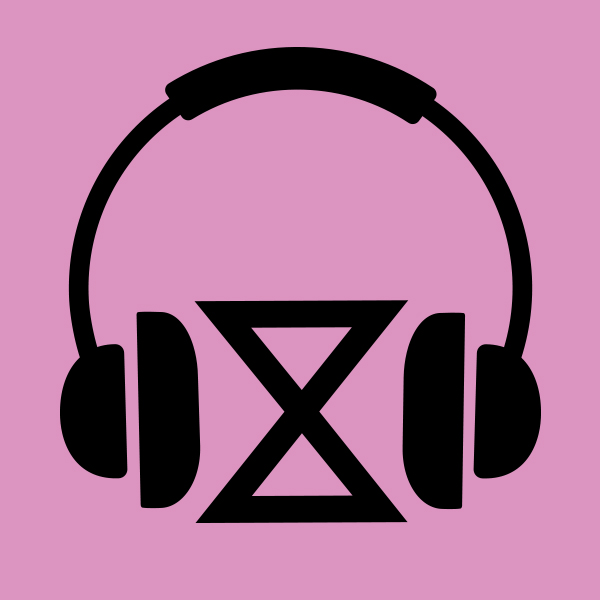 Ever wonder who the pink boat in Oxford Circus was named after?

This podcast focuses on Nina Lakhani’s new book ‘Who Killed Berta Caceres?’. A compelling thriller-like read, the story is based on the murder of a brave indigenous woman fighting the development of a World Bank funded dam in Honduras. Listen here.

Write your ‘Letter to Power’ 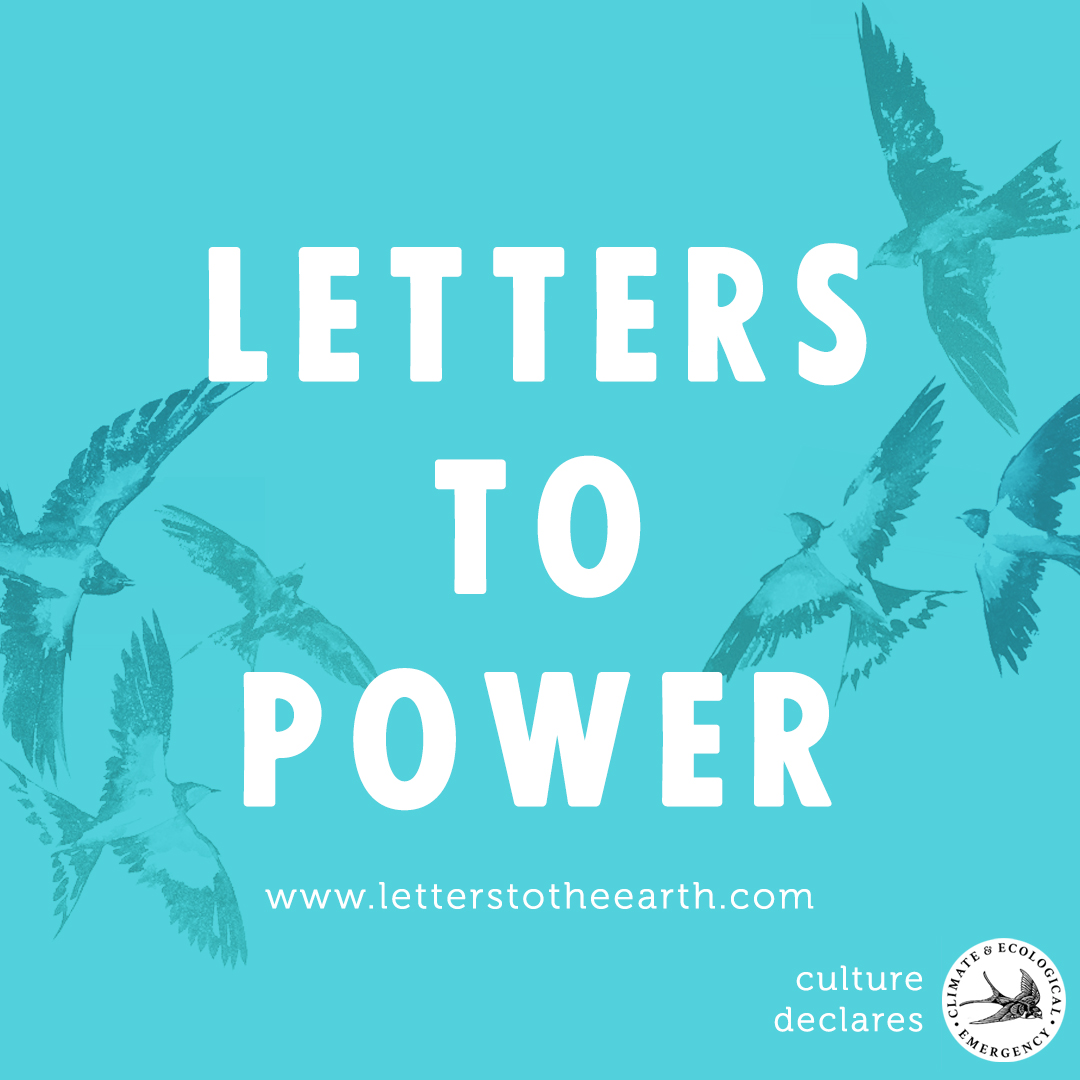 Letters to the Earth and Culture Declares Emergency invite you to write your Letter to Power. The toxic systems of oppression and exploitation driving us to extinction have never been as exposed as they are now.

What does power look like to you? What change do you want to see? A “letter” can be written, spoken word, a song, a piece of public art or performance.

Send your letters to those who have the power to influence. Post them, record them, stream them, publish them in newspapers or online from 1 September. Share your letter online with #LetterstotheEarth #LetterstoPower.

Thank you for reading!