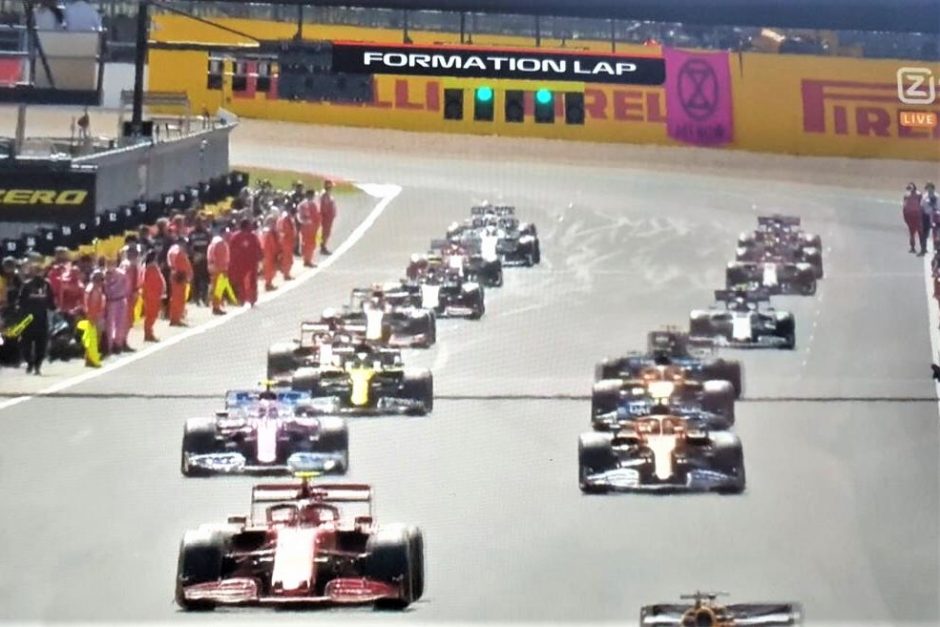 BREAKING: We’re way off track! Extinction Rebellion send a message to the world at today’s Formula 1

“Climate change is a serious threat: every one of us has the responsibility to protect our future and the future of the next generation,” – Lewis Hamilton

Four people from Extinction Rebellion UK have entered the Silverstone arena this morning and dropped a large banner that read ‘Act Now’ behind the start line of today’s Formula 1 Grand Prix right as cars were ready to set off.

Protestors say they were not there to interrupt today’s race, but to send a clear message to millions of viewers: that the world is way off track to stop the climate and ecological emergency and the 2050 net zero target from the EU and UK government is far too late. The protest hoped to encourage viewers to face the reality of our situation – that despite the industry itself taking leadership on the issue and pledging to go carbon net zero by 2030, global governments are taking the situation nowhere near seriously enough.[2]

Donald Bell from Extinction Rebellion Cambridge says: “Today was an opportunity to remind the world that the climate and ecological crisis hasn’t gone away and is intensifying every day. Although we applaud Formula 1 for taking the bold steps and pledging to go net zero by 2030, this strong leadership makes a mockery of the EU and UK governments’ own 2050 target. By the Grand Prix’s own standards, 2050 is far, far too late. It’s time the worlds’ governments show some leadership of their own.”

As nations begin to lift lockdown and get back to business as usual, world leaders have a duty to bring in measures to prevent future crises and create a world that prioritises people and the planet’s health and wellbeing. This is, after all, what people want, with 58% of people in the UK wanting a green recovery – and 80% in China, 81% in India.[3] Formula 1’s main audience comes from Brazil – with 115.2m viewers in 2018 – where forest fires have increased this July by 28% from last year, when devastating Amazon fires captured the world’s attention.[4]

With the world expected to pass 1.5 degrees of warming in the next 5 years, breaking Paris Climate Agreement pledges, it is clear this is the moment to seize the opportunity and rebuild with people and planet at the heart of the recovery.

Bells Davidson from Extinction Rebellion Lambeth says: “The Covid-19 recovery is the last best chance of making the radical changes needed to mitigate the worst of the climate and ecological crisis according to the executive director of the International Energy Agency, who said the next 6 months are crucial.[5] And what’s happening instead? The UK government specifically are bailing out carbon intensive industries and spending pennies on a green recovery, despite the majority of people in the UK supporting one.[6]

“We can’t just sit by and do nothing as black, brown and indigenous people in the Global South suffer and our coastal towns and villages here in the UK get swept away by storms. As Lewis Hamilton bravely said recently, ‘We all have a responsibility to tackle climate change.’”[7]

Some of the protestors wore Black Lives Matter armbands in solidarity with the protest for black lives held by Formula 1 before the race, with Extinction Rebellion organisers saying that the climate struggle and the anti-racist movement are deeply connected. It is historic and institutional racism that has enabled the destruction of people’s health, survival and ecosystems in the Global South, with the climate crisis disproportionately affecting people of colour.

Today’s banner drop comes a month before Extinction Rebellion UK returns to the streets, this time in London, Cardiff and Manchester, when they will protest day after day until MPs agree to debate their three demands.[8] The announcement was made as civil unrest surges and the world faces an intersection of global crises. Climate breakdown, Covid-19, racial injustice, economic inequality – all are symptoms of a toxic system propped up by corrupt politicians, that is driving us to extinction.

We invite everyone who is sick of the lies, injustice, inaction, to join us on 1st September.[9]