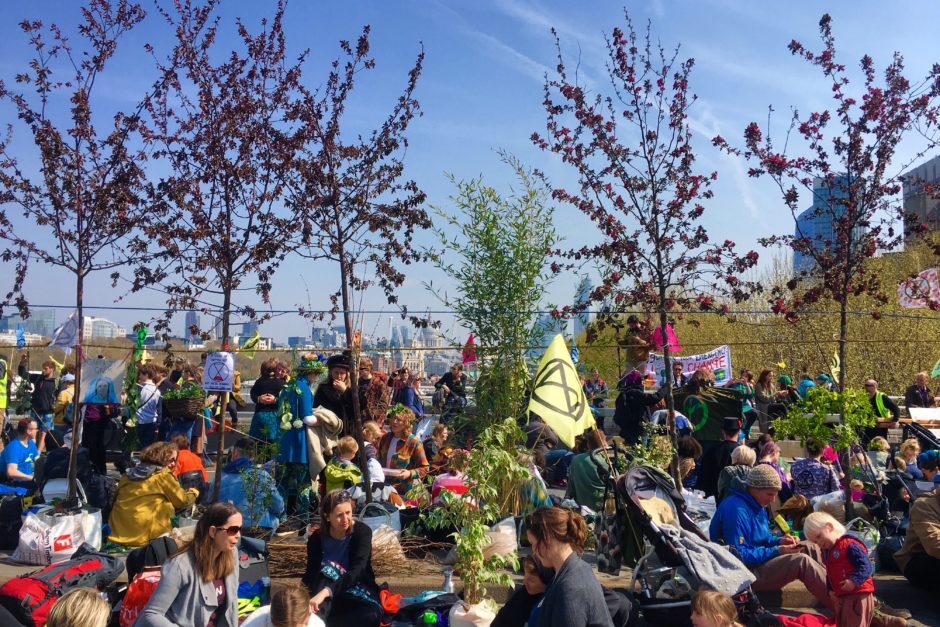 On the morning on April 15th, after months of planning, 47 trees were lifted onto Waterloo Bridge by XR rebel affinity groups. In the preceding weeks I had hand selected the trees for their ability to sequester CO2, for their visual impact and because some were about to burst into blossom.

Choosing 47 wasn’t deliberate, but as it turned out, wasn’t random either. On the bridge, the trees anchored the site and held the space. Some acted as ballasts for gazebos, others decorated the side of a skate ramp, many lined the central reservation with bees finding their blossoms in no time!

Hundreds of additional pot plants were donated over the week, creating a lush landscape, a Garden Bridge for the people, by the people. We handed out chalks for rebels to create a colourful tapestry on the road surface, and along with music, dancing, workshops and free food the space was completely transformed.

We reclaimed the streets. It was a joyous site to behold and experience.

After the action was over, I was entrusted in donating the rescued trees to community groups around London. In the process, I learned that over a century ago, 47 trees were planted by suffragettes in a commemorative arboretum. Seems to me, my selecting 47 trees was not a random at all. They represent horticulture as protest, the gentlest of non-violent civil disobedience.