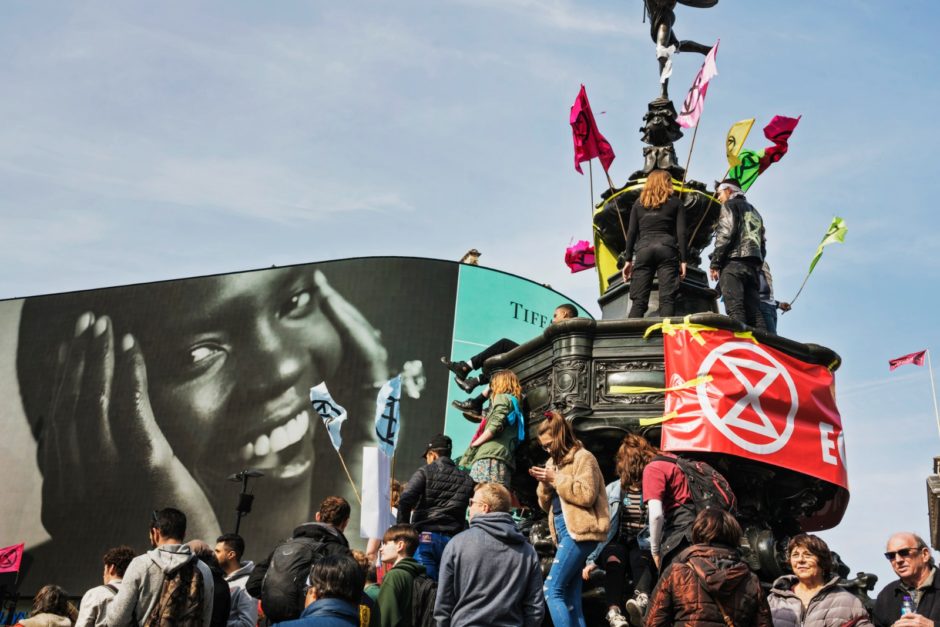 During the April rebellion, thousands of young activists joined XR on the streets of London to protest the government’s lack of action on the climate and ecological crisis.

As the generation that will be most affected by climate change, they brought love, rage, and everything in between to the April Rebellion. Below are 6 of these XR Youth rebels (for people born after 1990, with a focus on youth empowerment and climate justice) who share their stories from April.

“I remember this moment so clearly. A year later I still can’t process the emotions which were flowing through me that day. I felt everything and nothing all at the same time. At that moment I was still trying to process the chaos which was going on inside of me. The chaos which seemed to be me standing in a roundabout with lots of people, mainly young like me but also old. I was peeling an orange and was just about to eat it when this woman came up to me and asked if she could take my photo. I then never saw that photo again until I got sent it a couple of weeks ago and in that moment I stopped. Everything about this photo means much more to me now than it did at the time. There are many parts of my life I’ve lost because of being a climate activist. But other parts of my life have been created and even though it has changed everything so much, I would never change it back.”

“Imagining a new world isn’t easy for me. There are too many obstacles in the way, too many reasons to look away and crumble at reality. But after joining XR during the April Rebellion, I now know that a new world relies on us. It relies on us being an us. It relies on a collective. A we. A sense of togetherness and solidarity for those who aren’t within our reach. There was a moment in Oxford Circus where I felt at peace. I felt okay in all my fear and the few strands of hope I was clinging on to with my recent realisation that there is no going back from the impact that’s been made on our planet, our world and our futures. In this past year since the Rebellion, I’ve lived deeply but only because I’ve found people who have given me the space to do so.”

“The first day of the April Rebellion was one of the most hope-filled days of my life. The energy, the passion, the anger – but with the knowledge that we could do something with that anger – was infectious and exhilarating. It was the day, for me, that XR really became a guiding light to ease the fear of impending disaster and government apathy. It turned fearful anger into hopeful anger, and that really is so important for our movement. It is that hopeful anger has seen us to where we are now, and that will carry us through our current challenge and all the challenges we will face in the future.”

“The rebellion was the time of my life. I made the extremely last minute decision to join instead of using the ticket I’d already spent the last of my semester’s student loan on to go home for Easter, despite never having heard of XR. I truly believe this was one of the best decisions I’ve ever made.I’d been scared about the climate crisis since I was 10, but suddenly I couldn’t do anything but stay in bed, completely disengaged from normal life. I used all the power I had to drag myself to the Youth Strike 4 Climate, where I was invited to join the rebellion. Blocking the road at Piccadilly Circus, I learned the phrase ‘climate anxiety’, and that every other person present was experiencing it with me. For the first time in my life, I felt like I was truly part of something that mattered.”

“Nothing is quite as surreal as standing in the middle of the Oxford Circus roundabout, sun beaming down, feet on soft soil, jumping around to the Prodigy Out of Space remix. There is no better way to get know somebody than a 4am morning shift on the barricades. It is was unimaginable to picture Waterloo Bridge completely covered in graffiti and plants, all traffic brought to a halt until we did it. For a brief moment in time the people took back central London and made it one of the most vibrant, alive and welcoming spaces I have ever experienced. I rebel for my children, I rebel because otherwise I would be left feeling anxious and powerless, I rebel because only two short weeks later Theresa May declared a climate emergency. I rebel because together we can change the future.”