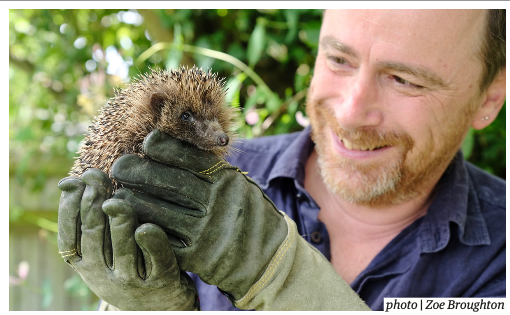 FIGHTING FOR CHANGE FOR HEDGEHOGS

When Change.org asked if I would like to launch a petition on their website I was a little sceptical, but then they pointed out that I could make a call for something that would help return hedgehogs back to their former glory.

My idea was simple: ‘This petition calls on the dismantling of industrial capitalism and the replacing of it with something kinder,’ but they said no.

We worked on it for a while until we came to a compromise. It was almost embarrassingly small – I launched a petition calling on all new housing developments to come with a hedgehog highway as standard. The new fences that come with the pocket handkerchief gardens need to have a small hole, just 13cm across, in the base. This allows hedgehogs to move freely from garden to garden.

Hedgehog numbers are down by 30% in urban areas and 50% in rural areas since the year 2000. There has probably been a population decline of 90 to 95% since the 1950s. A large part of this is the loss of food and shelter that comes with industrialised agriculture.

One of the biggest threats hedgehogs face is habitat fragmentation – the splitting of our landscape into small pieces. Our research has shown that hedgehogs can travel 2km a night in search of food, shelter and mates.

The new fences that come with the pocket handkerchief gardens need to have a small hole, just 13cm across, in the base. This allows hedgehogs to move freely from garden to garden

By the time the petition reached half a million signatures I was invited to a meeting with the housing Minister, and in July 2019 the National Planning Policy Framework was altered to include guidance calling for hedgehog highways to be included in new developments. Then in January this year Bovis (the fourth largest developer in the country) committed to creating hedgehog highways whenever feasible in all new developments, and to start a campaign to retrofit. This is not a full victory though – the teeth required to enforce the guidance have been removed.

When I sit in my shed and feel adrift in my campaign to change the way we treat nature I get a kick of joy from realising that I am not alone. So I persist, and I would love you to join me by signing and sharing the petition. We can make changes that may seem small to us – but these small changes mean the world to a hedgehog.

Hugh Warwick is an author, ecologist and spokesperson for the British Hedgehog Preservation Society.

Hugh’s petition can be found at: change.org/SaveOurHedgehogs