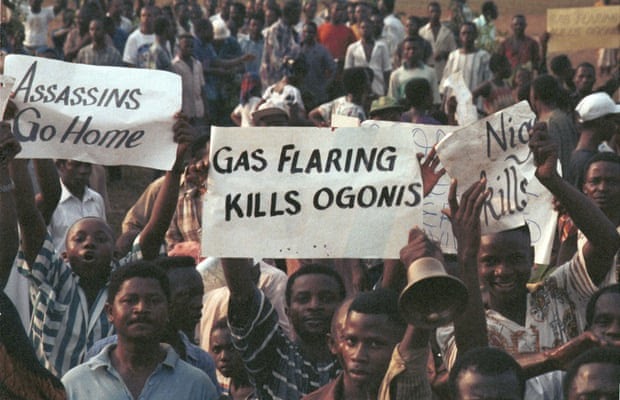 With the UK government’s pre-election declaration of a moratorium on fracking, now would be a good time to look at the situation of people around the world who haven’t been so lucky and continue to bear the brunt of the energy-intensive demands of western economies. Through the process of globalisation, industrial processes and the mining of natural resources have largely been exported to the global South. It’s no accident that the strongest modern resistance movements have also arisen in these regions. As the scramble for the planet’s remaining fossil fuels intensifies, the lessons of their struggles will become relevant to more and more people.

The first commercial oil well in the Niger Delta was drilled by Shell Darcy in 1956. Hundreds of billions of dollars in oil wealth have been extracted since then, siphoned off by transnational corporations or going to the central Nigerian government. The people in the delta region, around 31 million of them from over 40 different ethnic groups, have seen little of this money and suffer from poverty, disease and a lack of basic infrastructure and services.

It was this injustice, coupled with the environmental and health consequences of the millions of barrels of oil spills and gas flares contaminating the land, air and water, which led to the formation of the ‘Movement for the Survival of the Ogoni People’ (MOSOP). They staged numerous nonviolent protests in the face of lethal military reprisals, wrote a ‘Bill of Rights’ calling for political and economic self-determination, and the right to protect their local environment, and organised a democratic grass-roots opposition among a broad spectrum of the Ogoni people. They successfully drove Shell out of their lands in 1993, though pipelines remain and leaks continue to worsen the ecological damage.

In 1995 nine MOSOP activists including their leader, Ken Saro-Wiwa were arrested by the military and executed on trumped-up charges. Punitive raids on Ogoni villages killed thousands, and investigations by Amnesty International revealed that Shell were deeply implicated in the repression. Recently declassified documents show that in the wake of the killings the UK government opposed sanctions in order to protect Shell and other ‘investors’ in Nigeria.

With oil spills continuing and no discernable progress on a promised $1bn clean-up operation, paramilitary organisations like the ‘Movement for the Emancipation of the Niger Delta’ (MEND) formed in the 00s and began kidnapping oil workers, attacking military targets and sabotaging oil infrastructure, succeeding in their goal of lowering oil exports, sometimes up to 25%. As with MOSOP, the priority remains economic justice, as well as financial reparations and the environmental clean-up. They want a fair share of the oil wealth, not to do away with the industry entirely. It generally falls to NGOs to raise the issue of climate change and deeper problems with the whole fossil fuel economy, as when Nnimmo Bassey of the Oilwatch network put it to John Vidal of The Guardian that:

‘Before oil Nigeria was a rich country. Since oil began to be a major income earner Nigeria has become an impoverished country. Oil should be left in the soil[…] The oil-based civilisation has gone on for about two hundred years. It’s not going to take us to eternity. It’s time now for us all around the whole world, rich or poor, to move from this fossil-fuel production and consumption system and go the way of renewables.’  (interview near the end of this report)

Campaigners in the UK (the former colonial power in Nigeria) would do well to put pressure on the government and Shell in solidarity with those fighting the oil and gas industry in Nigeria and elsewhere in the global South, to avoid a kind of global NIMBYism where those who benefit most from the wealth generated pay the least of the human and environmental cost of the extraction.

For more on the struggle in the Niger Delta see this documentary on the life and work of Ken Saro-Wiwa and the films ‘Sweet Crude’ and ‘Delta Boys’.