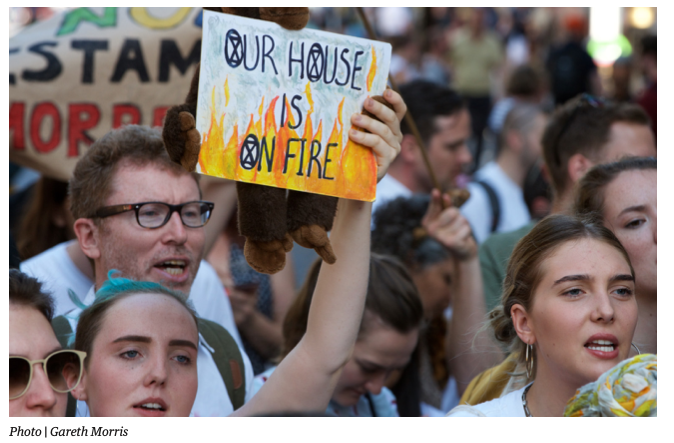 STAYING WARM IN A HOUSE ON FIRE

Paradoxically, global heating is likely to result in colder winters in Britain, as the temperate Gulf Stream falters, and disruption to the polar vortex unleashes the Beast from the East. At the same time, burning more fossil fuels to stay warm is the last thing we need. We can do a little to help reduce our fuel use (and bills) by putting on warmer clothes instead of turning up the thermostat, shutting doors and windows and blocking up draughts, but personal efforts can only help marginally. The big changes have to be made at government levels.

Heating consumes over half the energy we use in our homes, and about a third of what we use nationally, and most of it is fossil gas and oil. How can we decarbonise our heating?

New houses could – with improvements in building regulations – be built requiring practically no heating (or cooling) at all, but currently most of our housing is built to far poorer standards. Adding insulation and draught-proofing can make significant improvements, but nowhere near enough to eliminate the need for heating at all. Could we replace oil and gas boilers with electric heating – perhaps using heat pumps?

In France a lot of heating is electric, but they practically decarbonised their grid decades ago with cheap, low-carbon nuclear electricity, whereas in Britain we’re not even on course to replace our existing, ageing, nuclear power stations, let alone expand our fleet. Wind provides useful amounts of clean electricity (although solar is little use in the winter, when demand is highest), and we can also decarbonise our fossil- and biomass- fuelled power stations using carbon capture and storage, but we still have a huge job to even decarbonise our existing electricity supplies. Generating lots more clean electricity for heating (and upgrading the grid to handle the extra power) would add hugely to the challenge.

An approach being tested in the North of England is to decarbonise our gas network. Natural gas coming ashore from the North Sea will be split into hydrogen and carbon dioxide (CO2). The CO2 gets pumped back into depleted gas reservoirs deep underground, while the hydrogen is fed into our existing gas pipes to run modified cookers and boilers. It would require a massive conversion effort, but we did similar between 1968-1976 when we converted from town gas to “North Sea Gas”.

Whatever approaches this country chooses, it should be for a citizens’ assembly to decide, informed by the science, engineering and economics experts they call upon to advise them.

An extended version of this article, with references, can be found at is.gd/xrsfs

by SCIENCE FOR SUSTAINABILITY