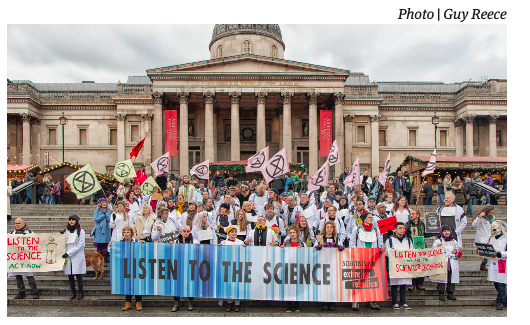 OVER 11,000 SCIENTISTS DECLARE A CLIMATE EMERGENCY

A team of scientists led by Professor William Ripple of Oregon State University have authored a letter relaying the moral obligation of scientists to ‘warn humanity of any catastrophic threat’. The letter has been signed by 11,258 scientists from 153 countries.

It declares ‘clearly and unequivocally that planet Earth is facing a climate emergency’. The letter lays out the key factors contributing to the climate crisis and criticises global society’s failure to address them, calling for the replacement of fossil fuels, cutting pollutants, conservation measures to protect ecosystems, plant-based diets, and converting the economy to one that is carbon-free.

The letter concludes: ‘We believe that the prospects will be greatest if decision-makers and all of humanity promptly respond to this warning and declaration of a climate emergency and act to sustain life on planet Earth, our only home.’