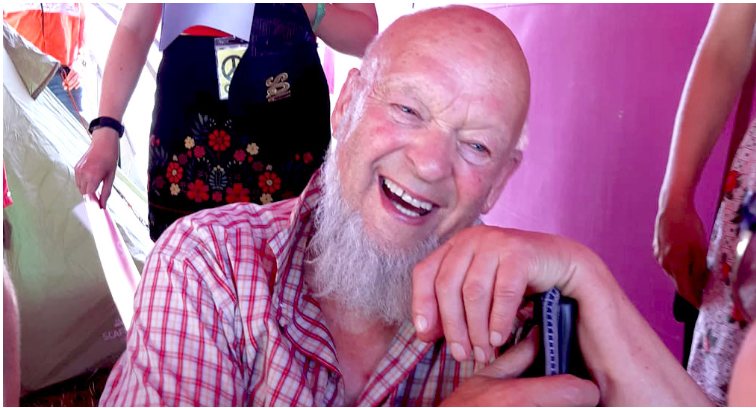 Michael Eavis – The Man Who Built A World

As action heroes go, Michael Eavis is one of the most amiable, non-threatening, well- loved you could find.

The Somerset dairy farmer who went to Bath Blues Festival in 1970 and loved the music so much he decided to set up his own festival on his family farm in Glastonbury, has created something so big, so special, and so well-loved, that even 49 years later he still seems surprised. This year, a quarter of a million people made the journey to Worthy Farm to enjoy a vast array of music, performances, talks and creativity at Glastonbury Festival. Covering Stormzy to The Cure, yoga classes to comedy, it’s one of the most loved and successful festivals on the planet.

Eavis’s favourite band in 1970 was the Kinks, who inspired him that day at Bath Festival. “I played their single ‘Lola’ to the cows every day through a sound system I’d rigged up through a sewer pipe wired into an amplifier with no knobs, just wires – it sounds crazy, doesn’t it? But to this
day I’d say there’s never been a better sound than that.”

John Martin in 1979 was his absolute favourite, though: “‘I Couldn’t Love You More’. Oh, it was a real tear jerker that one.”

I feel like I’ve got to do as much as I can do for humanity. That’s what keeps me going. I like to invest in society. I don’t want to be a moron.

Like any good action hero, Eavis is fearless, but in a gentle way. He loves telling the story that Michael Heseltine (nicknamed Tarzan at the time) evicted 30,000 people from Stonehenge in the 80s “because they were a threat to the nation – can you believe that? And he was Minister of Defence! Then they all promptly came down the road to Glastonbury Festival, made themselves incredibly useful, and helped me make the festival into the success it is today.

“So Tarzan turned it around for me really,” he laughs.

“The lesson from that is I had trust in people, and I’ve kept the Stonehenge people on ever since. And how much did that cost do you think? I don’t care. Because they’ve got the talent and can deliver and they were so skilled and so able. I learnt a lot from those kids actually. I owe them a huge debt.”

His love of, and faith in people comes through constantly. He reels off people who have worked with him through the years.

Arabella Churchill, granddaughter of Winston and a wild-child of the 70s, worked with him for 34 years managing the theatre field. “She brought all the hippies with her and left me with a footprint that’s lasted
all through the years which was the green, ecology message.”

Paul Charles was the only agent that phoned him back and he rewarded him with a life-long commitment to run the Acoustic stage. “He believed in me and got me Van Morrison and Jackson Browne on the same bill in 1982 – that was a real miracle for me.”

But the music, he says, “is the least important part of the festival – it’s
all the stuff that goes on around the edges.” Over 3 million people try to book to come here, he says, which is seven per cent of the entire UK population. People come to us because they trust us, plus they like what we do with the money.” [Glastonbury donates to numerous local and international charities every year.]

“I feel like I’ve got to do as much as I can do for humanity. That’s what keeps me going. I don’t want a new car or yacht or anything. My dear mother said the best thing I’d done was to buy 50 houses in Pilton village and make them into social housing, never mind the festival. They’ll never be sold, they’ll always be affordable. I like to invest in society – local clubs, Oxfam, WaterAid and Greenpeace. I don’t want to be a moron.”

This year, driven by his daughter Emily who now co-runs the festival with him – “We’re a dream team, we each do what the other doesn’t want to” – Glastonbury Festival threw itself behind the new movement campaigning on the climate and ecological emergency, Extinction Rebellion (XR). “All the best people I know are involved in it,” he says.

Environmentalism is in Eavis’s bones. I ask what he’s most proud of in terms of site management and he talks about simple things like letting the hedges grow into trees, or improving the drainage, but then divulges something much more exciting – that they’re turning 80kw of methane from the cow’s slurry into electricity every hour with a biodigester all day and night.

“That’s a lot of electric from the methane in the cow dung and it’s all going into the national grid. There’s a future there isn’t there? And it’s cut my electricity bills down from £3,000 a month to £21,” he laughs. This helps confront the elephant in the room: the impact of being a dairy farmer, but it can’t quite resolve it, given the contribution of livestock farming to the climate emergency.

“I don’t know what to do about that really. My family has been doing it for 200 years and we provide food to people in all corners of the Earth. We’re feeding millions of people with essential food – that’s got
to be a good thing right? But Emily’s not really into it, so it will probably die with me. People haven’t got long to go!”

When I tell him how many people have told me that he – and the festival – have inspired them into environmental activism, he takes the compliment happily.

“Yes, it does seem that way doesn’t it? I must have done something right!”