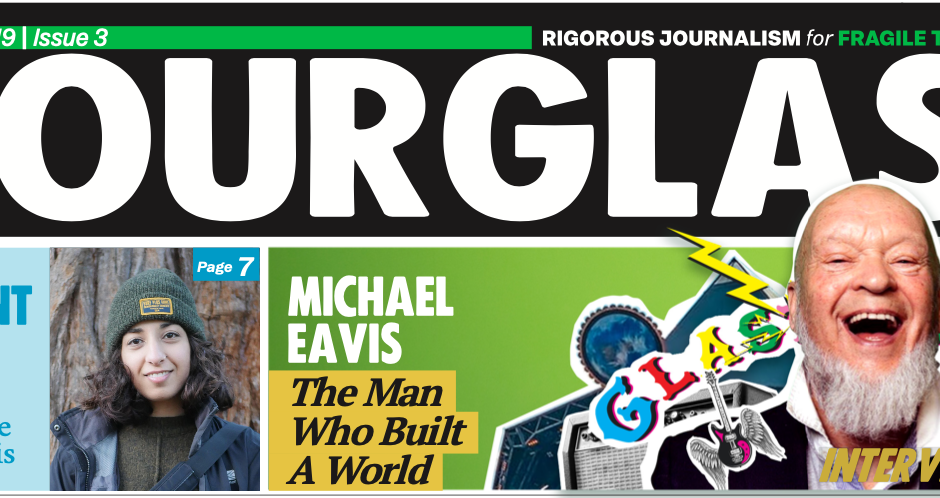 LETTER FROM THE EDITORS

Here at The Hourglass we are feeling reflective, as this will be the final issue of the newspaper for 2019. It’s been a spectacular year in many ways; although there has been a lot of bad news, there have also been
real shifts of positive change. Environment has become a top issue for the British public, and climate change is finally being discussed widely. These shifts have occurred over the course of a year, which shows how quickly things can progress when we push for them to. 2019 had many losses, but also many victories.

Still, many of us are feeling weary. People are feeling the burden of species decline, the grief of what we have done to the planet. There’s an election
on the horizon, and many of us are clinging to some small hope that something significant might happen. Extinction Rebellion is urging people to vote for climate- related policies – to ask politicians, #WhereIsYourPlan?

However, should climate not lead the way when the results are in, let’s not give up hope or the struggle. We’re in this for the long-run. We’re in it for all life on the planet, with no guarantee that things will get better. That can
get exhausting. So although real change will come from structural change, it’s good to get stuck in and feel like we’re doing our bit as well. As Simon Bramwell often says, “there’s no map for the situation we find ourselves in”; there are no easy solutions. There is no clear way forward. With that in mind, in this issue we look at things that ordinary people are doing to address the emergency situation we are in, from composting, to founding a festival, to growing your own food. We hope they bring you inspiration.

As the astrophysicist Carl Sagan said almost 30 years ago, “Our planet is a lonely speck in the great enveloping cosmic dark. In our obscurity – in all this vastness – there is no hint that help will come from elsewhere to save us from ourselves… Like it or not, for the moment the Earth is where we make our stand”.

We stand on the cusp of great change. Whatever happens next, let’s stand together.

See you in the New Year.

The Editorial Team of the Hourglass