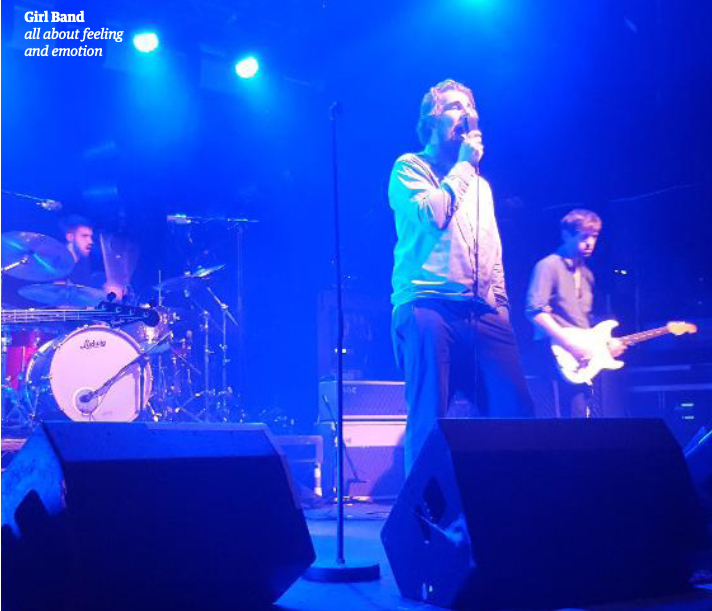 Dubliners Girl Band dropped in to Camden’s Electric Ballroom on Bonfire Night for a sold-out show on their first tour for two and a half years. They arrived on the music scene in 2015 with their remarkable debut album Holding Hands with Jamie, and I was lucky enough to see them perform one of the best gigs I have seen (supported by Goat Girl) at the Hare & Hounds in Birmingham.

Singer Dara Keily has suffered with his mental health during the writing of their debut album, and his health is the reason that the band have been dormant for two years. He is now recovered and has used his experiences to write the pronoun-free lyrics to their new album The Talkies, which
was launched unexpectedly in September. The band are keen to let the music do the talking now, although the music that they deliver doesn’t so much talk as scream in your face whilst grabbing your throat.

Girl Band look like a regular band, with guitar, drums and bass; but they don’t sound like one. There are no conventional song structures of verse and chorus; instead there are metronomic drums, wave-form bass produced with a beer bottle slide, and squalls of effects-laden guitar that sounds more like a demonic siren than a guitar. Over this aural assault, Dara Keily yelps his stream of consciousness vocals that initially sound like nonsense poetry, Lear-Like, but on repeated listens these words reveal layers of popular cultural references and speak of his experience of mental illness.

When I saw them three years ago, Keily was loquacious and witty, with much banter between songs. Tonight, he is almost silent, letting the lyrics do all the talking. It is an uneasy listen, but a brutal, primal experience to witness live. The packed crowd don’t care that there aren’t really any ‘tunes’; this is all about feeling and emotion, and the audience bounces along in a joyous sweaty mosh-pit. The whole thing is over in a tight hour
and a quarter, and there is no encore. The whole experience is so intense that there could be no more. There is no-one who makes music like Girl Band. They are utterly unique, and we are lucky to have them.