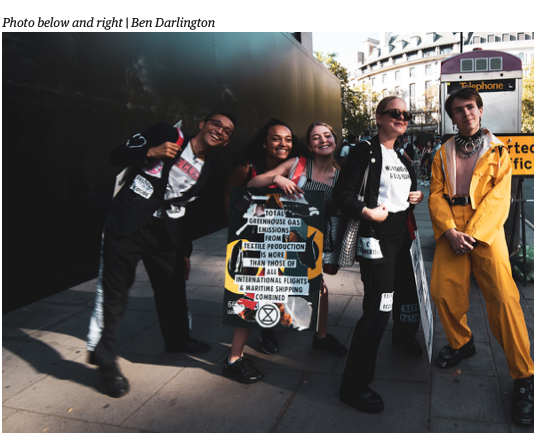 We are drowning in clothes, producing more than ever and using them
for much shorter amounts of time. While fashion companies send ‘surplus’ garments to incineration and consumers send tonnes of discarded clothes to landfill every year, most of us still do not consider the land,
water, pesticides, chemicals, emissions and human labour required to make our clothes.

‘The current fashion system is, at large, the embodiment of consumerism and built on the same grounds of exploitation ’

Built-in-obsolescence is at the core of the fashion industry, when the clothes are made less robustly so that they will be replaced, and when new trends are introduced to make what we already have seem undesirable.

The current fashion system is, at large, the embodiment of consumerism and built on the same grounds of exploitation that allows for capitalism to flourish.The planet is pushed beyond its limits while we spend planetary overdraft, and the workers are held hostage in a system of systematic exploitation, working long hours without safety regulations or a living wage overseas. Allowing this system to continue enables us to maintain high consumption and for CEOs to get richer but it is not in the interest of either the workers themselves or the health of this planet. In fact, it is sacrificing both.

The entire fashion industry is on hyper drive. Fast fashion no longer just refers to cheap mass-produced clothing, it highlights the speed
at which social media encourages and facilitates our consumption and disposal of all types of fashion. No sooner have we purchased something new than brands are ramming the next offering down our throats, allowing us no time to savour our style choices. Couple this with constant bombardment of celebrity and influencers in an ever revolving wardrobe of different looks, and the average ‘consumer’ is left with ‘Insta anxiety’. The result is a never ending stream of the purchase and disposal of clothing that is, in the end, both emotionally damaging to ourselves and environmentally harmful.

We are in an ecological emergency, and fashion – specifically the pattern of rapid production, consumption and disposal that wealthier countries have adopted in the last fifty years – is making the problem much worse. According to a report published by Oxfam this September, 53 per cent of British adults don’t have a clue about the destructive impact of fast fashion.

In the UK, we buy two tonnes of clothing every minute, producing more emissions over the course of a month than those from flying a plane around the world 900 times. Meanwhile, we have 11 years left of the UN deadline to mitigate against catastrophic climate disaster – to get to net zero carbon emissions. Yet fashion production is set to rise by 63 per cent by 2030. So that’s more pesticide use on conventional cotton, more water pollution, more desertification, more biodiversity loss, more worker poverty – and way more climate emissions. It’s crazy. We’re throwing away our futures and our children’s futures for the sake of a few pairs jeans. The present and future suffering is immeasurable. We are shopping our way over a cliff.