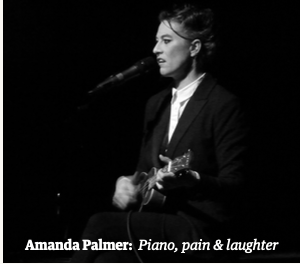 Amanda Palmer took her solo piano tour There Will Be No Intermission to
Cambridge on 20th October, performing a show for almost 4 hours with an intermission. This wasn’t so much a gig as a performance; part stand-up comedy, and part intimate confessional, interspersed with songs from both her solo career and her band The Dresden Dolls.

Palmer is brutally honest about her life; sharing far more than you would expect from an artist. Palmer’s gift is her honesty, openness, and her affinity with her devoted fan-base

The show was billed as an evening of piano, pain, and laughter, and
it didn’t disappoint. There was probably more talking than singing, and Palmer is brutally honest about her life; sharing far more than you would expect from an artist. Palmer’s gift is her honesty, openness, and her affinity with her devoted fan-base.

One song, A Mother’s Confession, which was about feeling guilty as a parent for various reasons, is one of the funniest songs I have ever heard. Other songs deal with internet hatred, abortion (this was the song that led to her being ‘uninvited’ from an Irish TV chat show recently), and of course, an old Dolls classic. Palmer explains the apparent dark nature of her material by saying that the duty of an artist is to lead their audience ‘into the darkness, but to provide some light’.

Palmer succeeds tonight, ending the show with the Disney ballad from the popular children’s animation, Frozen – Let it Go! It’s a clever way to end the performance, and appropriate to lighten the emotional load of the preceding four hours. Palmer will be back next year with her old band The Dresden Dolls and a new album. I can’t wait.