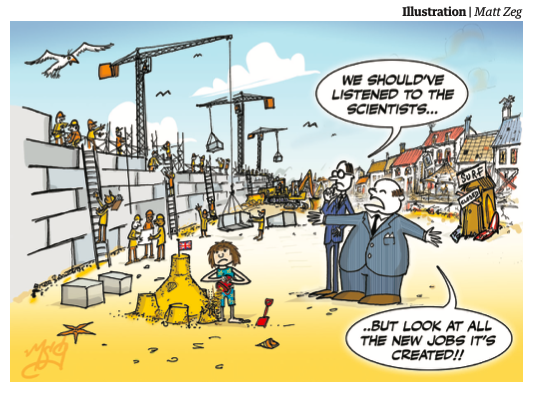 YOUR QUESTIONS AND THOUGHTS

Thank you for your many letters offering support
and suggestions for The Hourglass newspaper. Here’s a selection of some of the comments you’ve sent in.

Many thanks for the copy of The Hourglass newspaper. We don’t usually get “radical” communications through our letter boxes in Knowle Solihull, just advertising from care homes and financial advisors. Please include information on how we can pay for our future issues of Hourglass news sheet, as at last someone’s imparting information of real importance!

In this area people care very little about climate change, the heating is always on and the children get lifts to school in Range Rovers, so please lets spread the message in affluent areas and ask for contributions, we owe it to our future generations!

After reading this issue I turned off 19 lights and turned down the heating thermostat!

Flying must be rationed

George Monbiot’s proposal for a “frequent-flyer levy” (History will be kind to Heathrow climate protesters who stop us flying, 4 September) might have been radical 15 years ago, but is inadequate now considering the extreme lateness of the hour.

We need measures that produce huge and immediate and progressive reductions in aviation emissions, based on a philosophy that all sections of society must contribute to achieving those reductions. Money means little to rich people, so allowing them to pay to continue flying is inequitable but more importantly impractical.

In the 1960s, Richard Buckminster Fuller was warning of the very events that we see today worldwide. The very title of one of his many books ‘Operating Manual for Spaceship Earth’ (1968) indicates how forward-thinking he was.

A very few of us have been warning of the global trends for some years, but treated by most in the same contempt as shown today by President Trump and his acolytes. It has only been subsequent to the evident climatic changes which have wrought havoc to some that governments are beginning to wake up to their impending fate.

No matter what measures are taken, a time will come when much of central London is flooded. With each updating of climatic prediction, this time is getting closer. What measures have yet been considered to be taken when central parts of London become uninhabitable?

Extinction Rebellion is a very honourable cause, but I fear that, because of the complaisance of governments world-wide, the increase in global warming can only be slowed, not reversed as some seem to imagine. And even that can only happen if drastic measures are taken today, not in 25 years time.

This is a picture of my 61 year old dad reading The Hourglass newspaper, which I was given at Cambridge train station. This is important because my dad doesn’t have Facebook, Instagram, etc… He doesn’t consume news via any means except the TV and the newspaper. You don’t normally hear about the climate crisis, especially reported truthfully, on any of these things. So a giant THANK YOU to those people who are making this newspaper happen. You’re reaching people who otherwise wouldn’t be reached.

My name is Daisy Sage. I’m 10 years old and I drew this picture myself. It’s about cows farting and when they fart the methane gas goes into the atmosphere. It’s making the climate hotter which is the problem. There are so many cows in the world which is bad because that means so much more methane. There are so many cows because people like to eat lots of meat. So what I’m trying to say is that we need to stop eating meat.

EDITED BY THE HOURGLASS TEAM