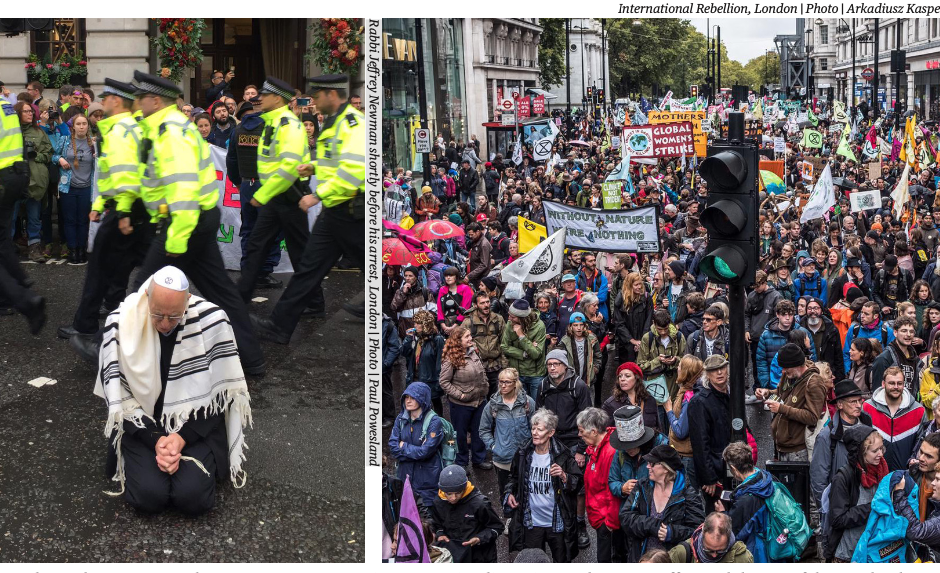 RABBIS AND ROYALS, SCIENTISTS AND STUDENTS, CRUSTIES AND CONSERVATIONISTS: All take to the streets for an unprecedented International Rebellion to call for radical action on the climate crisis

Two weeks of peaceful protesting saw tens of thousands of people in over 60 cities around the world take to the streets to demand that their respective governments act on the issue of climate breakdown.

“International Rebellion”, a global action mobilised by Extinction Rebellion, has inspired extraordinary unity across the globe, summoning people from New York City, London and Berlin, all the way to Sydney, Jakarta and Banjul (capital city of The Gambia). Sainey Gibba, 23, a student who was among the group that led the Extinction Rebellion actions in the country, told The Hourglass, “Deforestation in Gambia is increasing, I don’t want to lose my land because of the impact of rising sea levels and become a climate refugee, I am helping educate people in Gambia as the majority of Gambians don’t even know what climate change means.”

The Rebellion spread across multiple US cities with NYC being the largest, “for so long there has been a complete lack of movement and responsibility but finally people are realising that they have power,” said chef and NYC Coordinator Christina See, 35.

Despite 1,500 protesters being arrested globally and over 1,700 in London, people showed creativity, inventiveness and vigour in their approach to peaceful protest: a staged die-in in South Africa, hunger strikes in Rome, picnic protesters in Brussels (of which 453 people were brutally arrested and pelted with water cannons) and civil-diSCObedience flash mob dancing in Australia were among the stories that emerged over the past two weeks.

On 12 October over 30,000 Rebels joined a ‘Strength in Grief’ march across London to mourn the loss of nature and to mark the Day of Indigenous Resistance, which recognises the impact and burden of the climate and ecological crisis on people in the Global South.

Groups of people who you wouldn’t expect to collaborate protested side-by-side: 48-year-old farmer Dagan James who is leading XR Farmers in London had this to say about his Animal Rebellion counterparts: “we are in constructive discussions and our common priority is to concentrate on our core actions. There are things we disagree on but we are all being affected by climate change so we need to work together”.

People of different religions were working together as one, Christians, Muslims, Jews, Buddhists, and Earth Wisdom Tenders united, holding a “Faith Bridge” in London over the Rebellion. Mothiur Rahman, a 44-year-old lawyer from XR Muslims told The Hourglass, “I am praying for Rabbi Jeffrey and the rest of the people who were arrested today.” The 77-year-old Rabbi Emeritus of Finchley Reform Synagogue in north London, said “I see it as my religious and moral duty to stand up for what I believe in, and what I care about, for my grandchildren.”

Grandmothers, teachers, parents, doctors, scientists, lawyers, actors and artists protested alongside Royals and the terminally ill: 63-year-old Belgian Princess Esmeralda Dereth was arrested after she joined a sit-in protest
in Trafalgar Square, whilst Nick Hodgkinson who has a disability and requires a breathing ventilator travelled all the way from Leeds to join the protests in London. Even Stanley Johnson, the Prime Minister’s father joined the Rebellion and said he was proud to be an “uncooperative crusty,” a term Boris used to label the protesters.

Over 100 famous figures including Benedict Cumberbatch and Ruby Wax, who also attended the International Rebellion in London, signed an open letter acknowledging that their lifestyles and professions contribute to the climate emergency, and stating that “calling us climate hypocrites will not silence us”. Other signatories of the letter, calling on the media to “tell the public the truth about the climate crisis”, include Sir Mark Rylance, Sienna Miller, Peter Capaldi and Vanessa Kirby.

Despite all of these efforts, Extinction Rebellion’s demands have not yet been met. In the UK these are: that the government tells the truth about the severity of the situation by declaring a climate and ecological emergency; that the UK halt biodiversity loss and drastically cut its greenhouse gas emissions, aiming for net zero emissions by 2025; and that the government creates and is led by a Citizens’ Assembly that will make decisions on climate and ecological justice.

On 15 October the Met police in London banned Extinction Rebellion protests from the whole of London. At the time of writing, Rebels have condemned the police’s decision as draconian, applying to the High Court in order to challenge the public order. Various NGOs and politicians have also condemned the ban as unlawful.

Andrew Medhurst, an ex-trader with HSBC and Lloyds who quit his 30-year career to join Extinction Rebellion, says he will not give up: “As someone who used to manage risk when I worked in the bank, I would have never been allowed to take risks that will threaten the balance sheet and blow up the bank, but this is what the government is doing.”