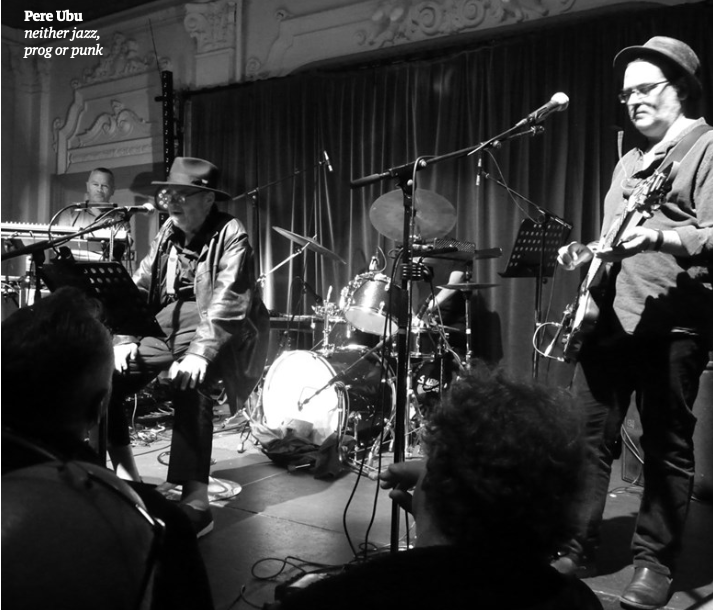 Pere Ubu, the avant-garage band founded in Cleveland, Ohio in 1975 from the ashes of proto-punk group Rocket From The Tombs, launched their latest album ‘The Long Goodbye’ at the beautiful art- deco ‘Bush Hall’ in West London on Friday 13th September.

Led by vocalist and sole surviving founder member David Thomas, the band have been pushing musical boundaries for forty-five years, and this latest album is possibly their most ambitious and challenging yet. Davis Thomas suffered serious health issues recently and was hospitalised during the US leg of touring their last album. His band mates were told that he was not likely to recover, but survive he did, and he immediately went into his studio to write and create ‘The Long Goodbye’, a record designed to tie up all the loose ends of Pere Ubu from the previous five decades, and to ‘close a chapter’ for the band.

Thomas himself is clearly not a well man. While his brain and voice are still pin-sharp, and his banter between songs is still as darkly funny as ever, his body is clearly failing him. He is wheeled into the venue in a chair, has to be carried onto stage, and performs seated. You have to give him credit for still putting on such a powerful performance while clearly in such perilous physical shape.

The band for this short tour is a stripped down version of Pere Ubu, similar to the ‘moon unit’ that often road tests new material, and consists of David Thomas on vocals; Keith Molinare on guitar, Gagarin on synths and electronics, and (returning to the band after 30 years) Chris Cutler on drums. The band perform ‘The Long Goodbye’ album in full, although not in order, and it is a powerful piece of work, veering considerably more towards experimental electronica than Ubu’s usual output.

The music is almost impossible to classify. It’s neither jazz, prog or punk, but a unique melding of all three; sitting as a backdrop to the lyrical stories that Thomas weaves about the journey to Bay City. It’s often an uncomfortable listen, but one that offers much reward if you allow it space to grow, and Thomas is still a consummate lyricist. Thomas jokes darkly about Pere Ubu’s protocol for his own death, and promises that ‘The Long Goodbye’ is not the end of the road for Pere Ubu, but the end of ‘a’ road. Let’s hope that there is more mileage in this most unconventional of bands still to come.