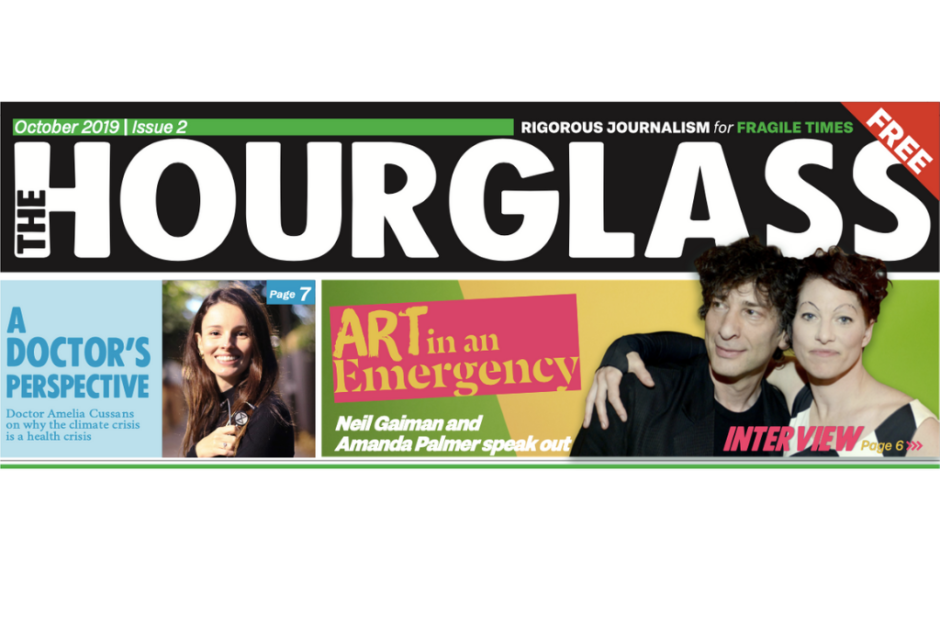 LETTER FROM THE EDITORS

We’ve had a fantastic response to Issue One of The Hourglass, which was widely distributed across the UK in September. Some of the responses can be seen on page 14. (Here) We’ve also had requests for copies of the newspaper from as far away as Western Norway, Finland, Amsterdam, New York and Canada. It’s almost as if people around the world are calling out for climate reporting…

With this in mind, we’ve also added more pages to this issue, and made the font bigger, which a few of you asked us to do.

We live in challenging and uncertain times. The war-type mobilisation needed to address the climate and ecological crisis is not yet underway, and there’s no knowing how the British public will respond to the coming societal breakdown that many experts are predicting.

As extreme weather continues to batter the world, and as natural disasters increase in their frequency and intensity, hectares of crops either dry out or sit underwater, and millions of people lose their homes and become displaced people, we look to each other. This is not a future scenario: it is happening right now around the world.

In many ways we in the UK are still protected from these extremes, but the climate and ecological crisis knows no borders and soon enough we will feel the impacts of a world that is rapidly heating up. Will we do what we can to bring down our emissions and transition to a low carbon economy, or will we continue with business as usual? Will we form supportive communities to help each other through the worst times, or will
we fight over tins of beans and descend into mob rule?

Will we attempt to salvage something for our children and future generations, or will we allow a small minority of people to continue to amass wealth at the expense of our planet?

The Editorial Team of The Hourglass