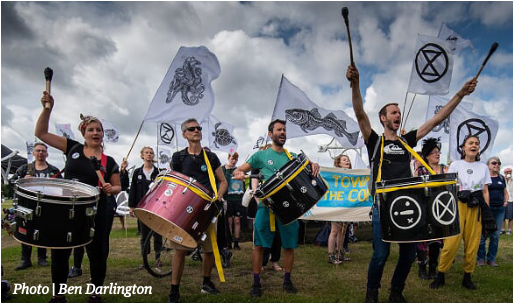 BUILD AT THE SPEED OF TRUST

It’s March 2019 and I’m helping Jake load four full drum kits out of his van and back into storage. He tells me, “Samba is definitely the way forward. I realised it after the last protest we both did playing those two djembes. It wasn’t enough. With Samba drums you can march. Everyone can hear you coming and they all want to join in.”

I’ll be honest, until I saw it for myself, I had no idea why marching drummers would be good at a protest. But I trusted Jake. I’d played with him for years, watched his effortless gift for bringing people together through music. By the time I met the April Rebellion band they were already a tight-knit group, rehearsed and ready. We marched together on the roads in place of cars, drumming with such energy, and it was then that I saw that Jake was right: standing on the shoulders of a tradition of Brazilian Carnival Music, we lifted people’s hearts. And why not, after all, celebrate the wonderful world we are fighting to protect?

Through the band, I saw the building blocks of a community. The drummers made decisions together, hearing every voice. We never asked people to join. We would just say: “There are plenty of spare drums if you want to come along.” The band didn’t issue requests, only invitations; offers of inclusion.

Jake used to say to me “build at the speed of trust”, and he was right; we needed strong bonds, which can only grow that way. Where would we have been without group trust when we arrived at Parliament Square and marched its four corners to take the ultimate stand against hundreds of police? When I saw the tidal wave of drummers storming down Regent’s Street to Oxford Circus to interrupt police taking the Pink Boat, it was loyalty that made me take up the whistle for the first time and lead alongside Jake.

What I did surprised me, because I realised I would not have done those things for myself, but I did them in a heartbeat for my community because they would for me. Since when have any of us mattered that much, been heard, considered, appreciated and defended? This is what democracy feels like.