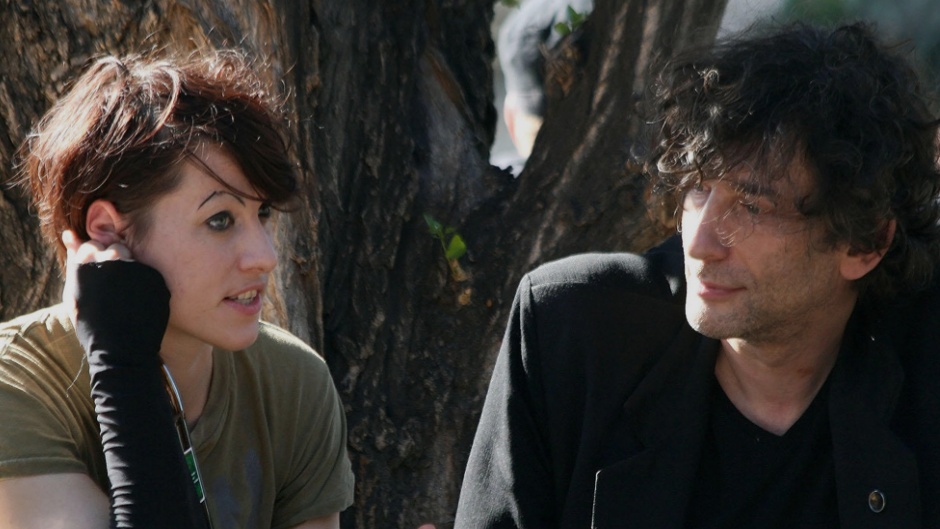 Art in an Emergency / An Interview with Neil Gaiman & Amanda Palmer

Like so many of us, writer Neil Gaiman and musician Amanda Palmer have been struggling to come to terms with the enormity of what is happening to our planet.

Anyone who has followed Neil’s writing and television work or Amanda’s music in recent years will have noticed environmental themes rising in prominence. There is the apocalyptic figure of Pollution in Neil’s Good Omens, and Amanda’s references to rising water and hotter summers in her new album There Will Be No Intermission. But as political instability and glacier melt worsen, the husband-and-wife team wanted to strip away the metaphors and discuss the climate directly. In a flat during the first week of the International Rebellion, I ask them – why did they contact The Hourglass?

“When I saw Extinction Rebellion was starting its own newspaper I was really excited,” answers Amanda, who has been banging a drum for independent media channels for years.

“I have been concerned with the climate crisis for a long time,” says Amanda. “But recently, thinking about our son Ash, I feel more heavily conflicted than I have before. Fighting for feminism and abortion rights is all well and good, but if there are no people around to make use of those rights then I wonder where my energy is best spent.”

In the past few weeks, Amanda has performed at two youth climate marches and brought school strikers up on stage to share her platform. Has she reached a personal tipping point?

“Fighting for feminism and abortion rights is all well and good, but if there are no people around to make use of those rights then I wonder where my energy is best spent.”

Neil has been quietly calling for greater action on the climate emergency for years, so I ask him where he thinks our energy is best spent. He has been adjusting his diet and has taken up amateur beekeeping, but he recognises that ultimately, individual actions are not enough.

“I’ve seen statistics saying that if every human did x, y, or z it would change very little, while if government and industry did just a fraction of that it would change things enormously. I think that civil disobedience gets attention, has worked many times in the past. It can change minds.”

It is Extinction Rebellion’s third demand – to set up Citizens’ Assembly, that animates Neil the most. “I don’t think that governments work currently. I don’t think systems solve problems, I think people solve problems. One of the things we know about juries is that sometimes they can get it wrong, but they actually have a remarkable tendency to work together to try and get their judgements right.”

What is the purpose of our work in a warming world? What, ultimately, is the value of art?

Neil and Amanda freely admit that they do not have all the answers. I ask them – when they talk about supporting climate action, does it extend to Extinction Rebellion’s specific strategy of disruption and arrest? Amanda hesitates, then says, “I mean, I’m about to write a blog to tens of thousands of people all over the UK, suggesting they come see me perform a ‘special event’ in London, and also suggesting that they take very very good care of themselves and read Extinction Rebellion’s guidelines so they understand how to keep safe.”

“Are you prepared to be arrested?” I ask. “Yes,” she replies, unhesitatingly, but: “I feel conflicted all the time. Should I never fly again, go home to America and devote myself to planting trees? Or does it still make sense to tour from city to city, using a lot of resources, talking to people about compassion and the climate? I can’t imagine that I am going to make choices going forward in the same manner as I did even a year ago.”

It’s a variant of the struggle facing us all. What is the purpose of our work in a warming world? How much carbon is justified to raise awareness of the UN’s refugee program, as Neil does? What, ultimately, is the value of art?

This question is central to Amanda’s current show, where she grapples with a sense of her own futility. “I wish I had an easy answer, but I don’t know what to do half the time. But I’ll be honest about it with anyone.” Her voice cracks as she adds: “anyway, soon we’re not going to have the option of any of this privilege.”

It’s a familiar moment in serious conversations about climate change, where we catch a glimpse of the terror many of us already feel.

They may not have answers, but they’re in it with the rest of us and committed to the first demand of Extinction Rebellion, which is to Tell the Truth.

“I know that I believe the science,” Amanda says, “and I also know that humankind has done extraordinary, revolutionary, magnificent, things fast before.”