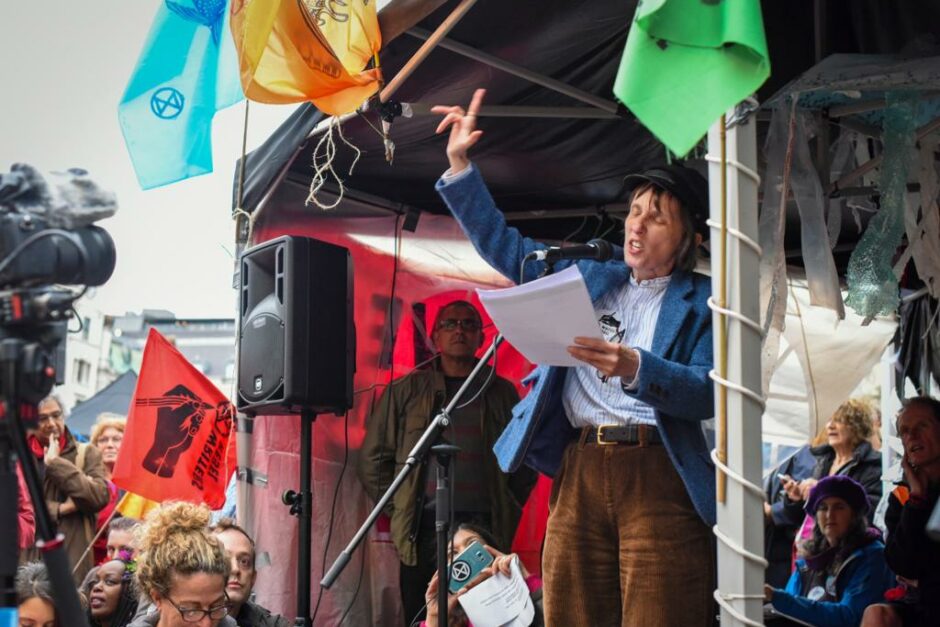 Public figures speak up for protesters in prison

Brian Eno, David Gilmour, Nick Hornby, A L Kennedy, Robert Macfarlane, Ben Okri, Chris Packham, Helen Pankhurst, Miranda Richardson, Sir Simon Schama, Kamila Shamsie, Lemn Sissay, Ali Smith, Juliet Stevenson and Dame Emma Thompson are among those who have signed a letter which begins: ‘We are writing in solidarity with all those in the UK who have recently been imprisoned for taking part in nonviolent protests.’

This letter – co-ordinated by Writers Rebel and published in the Guardian – is published after a year in which over 100 protesters have been imprisoned in Britain, and in which more punitive legislation against protest has been passed.

‘We are writing in solidarity with all those in the UK who have recently been imprisoned for taking part in nonviolent protests. Right now, many people who are deeply concerned about the climate and environment are turning to civil disobedience. While it is understandable that the state wishes to limit the disruption this may cause, it is vital that the right to protest is protected. Protest plays an essential part in our society in raising public awareness and enabling change. Let us not forget the urgency of the situation that environmental protesters are highlighting. The resilience and stability of our climate and our whole ecosystem are at risk. As António Guterres has said, ‘Climate activists are sometimes depicted as dangerous radicals. But the truly dangerous radicals are the countries that are increasing the production of fossil fuels.’ We stand with all those who are trying to sound the alarm and to protect our beautiful world.’

Here is a full list of the signatories, in alphabetical order:

A few of the signatories wanted to let us know why they signed.

AL Kennedy, writer, said: ‘In the chaos and ruin the pseudo-Conservative regime has created in the UK, we have seen many treasures and values dear to most Brits destroyed. Our NHS, our beaches and rivers, our inner cities and national monuments, our arts, our transport and education systems and so much more are all on the brink of collapse. While Brits maintain their empathy and humanity, they struggle against a government with neither. Perhaps worst of all is the dogged lawlessness of those who rule us and their slow imposition of antidemocratic legislation to suppress dissent. That the UK now has political prisoners, incarcerated for defending sustainable life on Earth is yet another national disgrace.’

Ben Okri, writer, said: ‘Why is it easier to punish people who are trying to save our world than to face the causes of the environmental disaster hanging over the human race?’

Helen Pankhurst, writer and campaigner, said: ‘At Bow Street Magistrate Courts in 1908 my great grandmother Emmeline Pankhurst defended the Suffragettes’ actions by saying: “We are here, not because we are law-breakers; We are here in our efforts to become law-makers.” The same applies to the actions of climate activists today.  They have my support both because the barriers to protest that they are increasingly facing demonstrates the dangers to democracy when protest is silenced and because climate change is an existential threat that those with power must do more to confront.’

Juliet Stevenson, actor, said: ‘The science is irrefutable, and the devastating effects of climate change can now be seen all around us. It is not those who are in prison for protesting who are behaving irresponsibly, but our government, which has persistently refused to take appropriate action. Instead of locking up those who take to the streets in protest, the government should act now on climate change.’