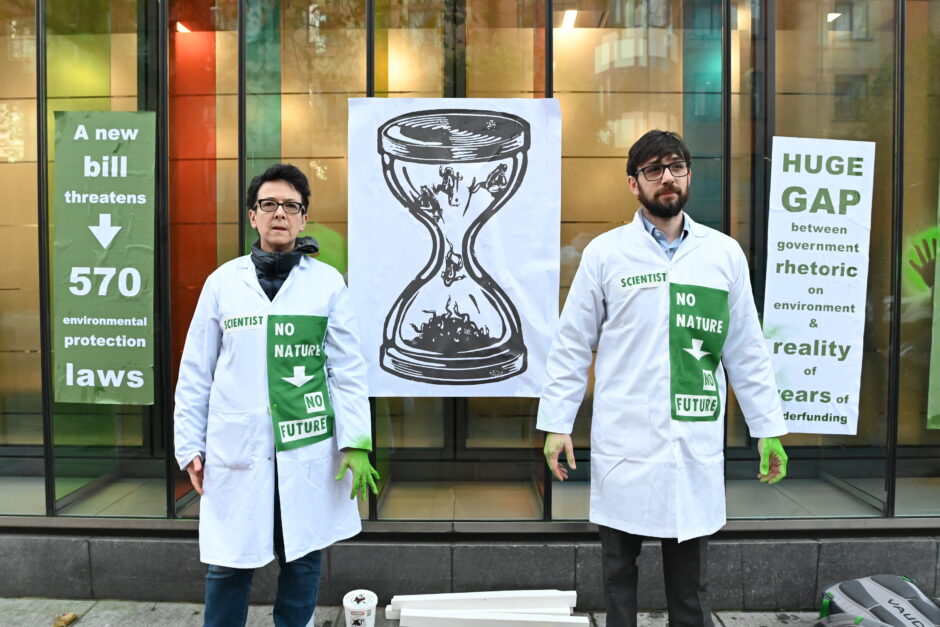 At 8am on Friday November 25th, a group of scientists pasted posters on the windows of the Department for Environment, Food & Rural Affairs (Defra) to highlight the state of nature in the UK and the failure of the government to protect it. The scientists who took part in the action and risked arrest included leading experts in ecology and conservation science who have previously worked for or advised Defra.

The action comes just a few days before the start of a major UN biodiversity conference in Montreal, Canada. [1] Where leaders will have to face the fact that the globe has failed to meet a single one of the Aichi goals for protecting nature agreed in 2010. [2] This is at a time when scientists warn the world is facing unprecedented rates of biodiversity loss, with 1 million species now threatened with extinction worldwide. [3]

The posters contained scientific evidence calling attention to the dramatic recent decline in species and precious natural habitats like peatlands, wetlands and ancient forests, the failure of government to deliver on its commitments to address this, and the threat posed by new government actions, which could scrap existing protection measures. [4] [5] [6] [7] [8]

This act of nonviolent civil disobedience was organised by Scientists for Extinction Rebellion. In a letter written to Defra staff, they were keen to highlight that the protest was not directed at the employees, acknowledging that they are doing a crucial job in difficult conditions. [9] Public funding for nature protection has seen a one third cut in real terms in just the last 5 years. It’s disgraceful that employees of Defra and their scientific advisors with all their expertise are being actively stopped by our government from doing their job.

The scientists involved also pointed out the need for much better dialogue and engagement with the public who overwhelmingly believe that nature is under threat and support urgent action to protect and restore it. [10] The recent climate assembly that was held in the UK put forward policies that would have helped the recovery of nature, but the government has failed to act on the public’s recommendations. [11]

The twenty scientists standing in front of Defra’s head offices stressed the critical importance of nature to our well-being and our capacity to reduce climate change and adapt to its consequences, summed up by their chant of “no nature, no future”.

Quotes from the scientists who took part in the action:

Professor Jeff Waage OBE, an ecologist and former member of Defra’s Science Advisory Committee, said: “Ours is one of the most nature-depleted countries in the world. The Government has made commitments to address this dire situation, based on excellent scientific advice, but it is failing profoundly to deliver on these.

“Further, it is misleading the public, claiming for instance that it is close to its target of protecting 30% of England for nature by 2030, when the true level is currently about 5%. Adding to this its recent failure to meet legal deadlines to set targets for clean water and nature recovery, it is clear to me that this Government is not taking its commitments seriously. Critical nature recovery in the UK is being actively delayed, avoided and undermined. Habitat- and species-loss looms large, and nature-loving citizens need to hear the truth. That is why I am here today.”

Dr Laura Thomas-Walters, a conservation social scientist, said: “I left my job as a senior analyst at Defra this year because I felt I had no opportunity to make real change. I worked with wonderful colleagues, smart scientists, but we were stymied by a lack of ministerial support. Civil servants are there to serve at the discretion of their ministers, and without buy-in from the Government we couldn’t work on vital issues.

“Biodiversity loss is just as big a threat as climate breakdown – we are racing at breakneck speed into an environmental catastrophe, and the ministers are the ones cutting the brakes. I left Government so I could speak up, to finally demand the change we need.“

Dr Ryan Walker, an ecologist and conservation biologist, said: “During my lifetime I have watched the decline of once numerous species such as lapwing, curlew and hedgehogs, descend to critically low numbers in this country. Tragically, our government’s response to this biodiversity crisis is a proposal that threatens 570 pieces of legislation specifically protecting nature and our natural environment. Our habitats and environmental legislation desperately needs strengthening, not disregarding as this Government is proposing. Healthy, and functioning ecosystems are essential to our food security and the clean water and air that we all depend upon.

“We are here as a coalition of scientists, to demand unequivocally that this Government takes its commitments to nature protection seriously, this is now a matter of survival, without nature there is no future”

[1] The UN Biodiversity Conference (Fifteenth meeting of the Conference of the Parties (COP-15) to the Convention on Biological Diversity: https://www.cbd.int/conferences/2021-2022

[4] Populations of UK’s most important wildlife have plummeted since 1970: https://nbn.org.uk/wp-content/uploads/2019/09/State-of-Nature-2019-UK-full-report.pdf

[6] We’ve allowed the loss of 90% of our wetland habitats in the last 100 years: https://www.wildlifetrusts.org/water

[7] The UK has failed to reach 17 out of 20 UN biodiversity targets agreed on 10 years ago and in six areas the UK has actually gone backwards: https://www.rspb.org.uk/about-the-rspb/about-us/media-centre/press-releases/review-our-world/

[8] The Government’s EU Retained Law Act will scrap over 570 environmental protection laws unless new legislation replaces these in the next year: https://www.wcl.org.uk/nature-campaigners-hit-out-at-plans-to-drop-retained-eu-laws.asp

[9] Letter from Scientists for XR to Defra employees: https://www.scientistsforxr.earth/letter-to-defra

[10] Majority of UK believe nature is in crisis and urgently needs help: https://www.nationaltrust.org.uk/services/media/nature-crisis-charities-public-conversation

[11] What we eat and how we use the land: https://www.climateassembly.uk/documents/88/Chapter_6.pdf