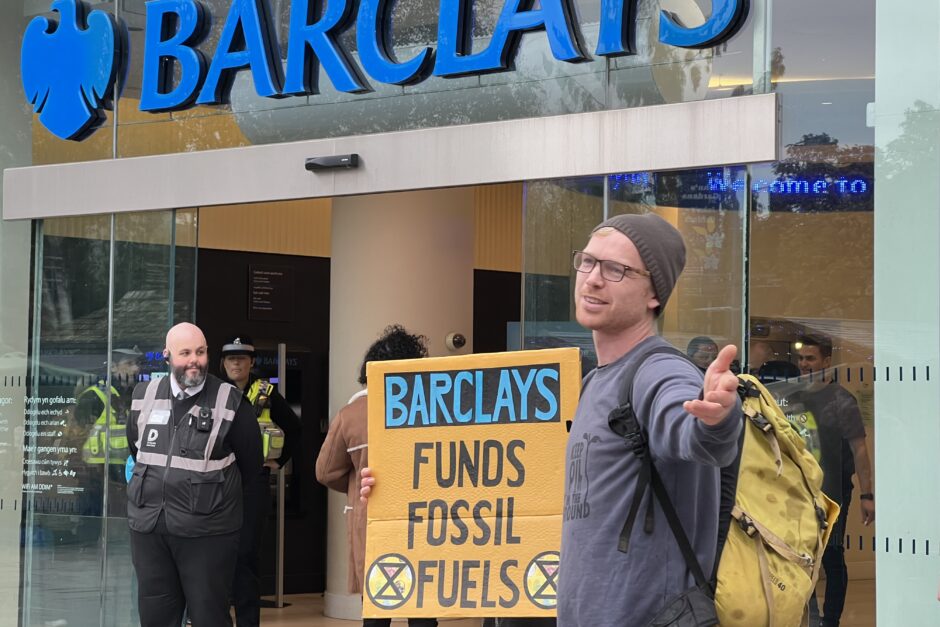 On 14 November Extinction Rebellion groups across the UK carried out a day of peaceful, non-violent direct action to put pressure on Barclays Bank to stop investing in fossil fuels.  Hundreds of groups occupied, painted, sprayed and flyposted branches. They painted buildings with red paint and fake oil, locked themselves onto buildings, leafletted and held die-ins and street theatre to draw the public and bank employees’ attention to the fact that the bank is Europe’s largest fossil-fuel investor.

Last year Barclays recorded higher-than expected pre-tax profits of nearly £2bn for this year’s third quarter and have invested nearly £20 billion in fossil fuels, despite the UN Secretary General’s warning at the opening of COP27 that the world is “on a highway to climate hell”.

In London 45 Barclays branches were fly posted with posters bearing the Barclays logo and reading ‘This is an intervention’ and ‘Banking on climate chaos’. Some City branches, such as the one in Chancery Lane were covered in paint.

In Birmingham, activists threw fake oil over the entrance to a Barclays bank, while others held banners, and broadcast Barclays’ activities as Europe’s largest financer of fossil fuels.

Louise, 51, one of the Birmingham protestors explained why she took part: “I have two children and two grandchildren and I’m afraid for their future. By continuing to support fossil fuel industries, Barclays are destroying the planet, the only home we have”.

In Cardiff members of XR Cymru locked themselves onto a Barclays’ branch on Old Church Road, and held a die-in to let bank customers know about  the bank’s investments in fossil fuels. There were other similar protests in Wales in Swansea, Carmarthen, Aberystwyth, Cardigan and Bangor.

Pam Williams, who took part in the Cardiff action said:“This is a peaceful protest which feels like the only thing I can do to make staff here talk to their bosses, and remind customers that they have alternatives to where to put their savings”.

To forestall criticism that these actions were damaging property, washable paint and fake oil were used, and those involved took great care to ensure that none of the bank staff nor members of the public were harmed or put in danger in any way.